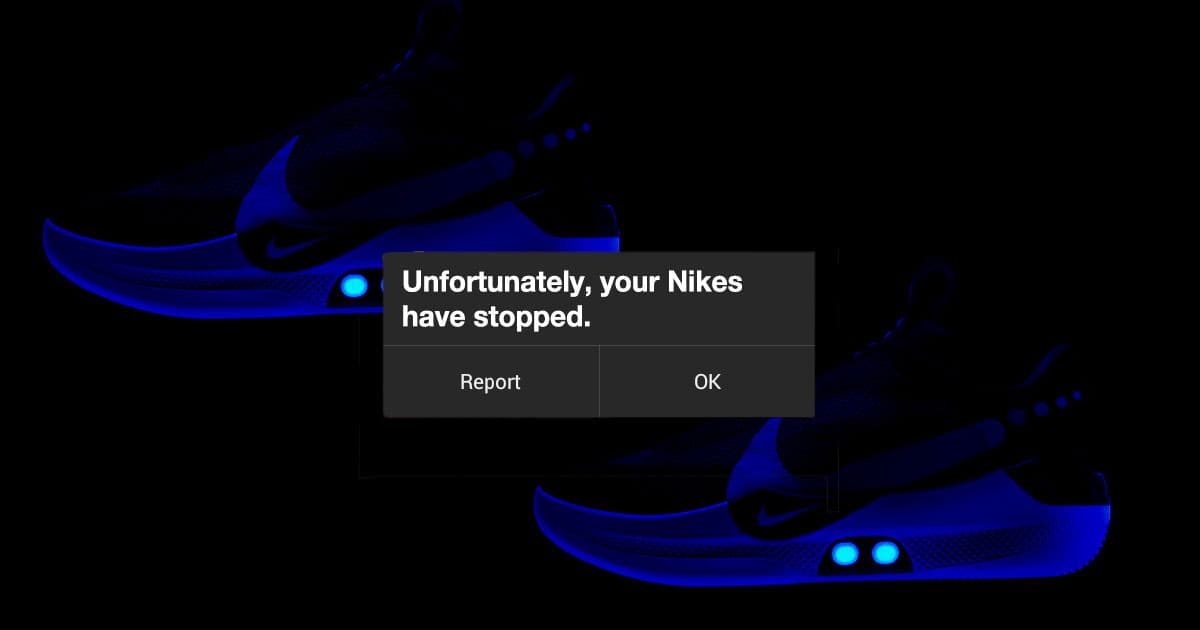 "It's pretty sad paying $350.00 for something that doesn’t work properly."

"It's pretty sad paying $350.00 for something that doesn’t work properly."

A great way to generate hype for your product is to name it after something from the "Back To The Future" franchise. That's why auto-balancing skateboards are called "hoverboards" and Nike's automatically-tightening shoe uses the phrase "self-lacing."

Unfortunately, a great way to generate ridicule for your futuristic tech product is to totally break it with a software update, which is also what Nike just did with the aforementioned sneakers, according to The Verge.

The $350 shoes were first sold on Sunday. And now, thanks to an update to the app people can use to tighten or loosen the shoes, Android and iPhone users are running into several different bugs that keep them from using it at all.

“It’s pretty sad paying $350.00 for something that doesn’t work properly," one user wrote in an app store review, according to The Daily Dot. “Hope Nike fixes this fast and sends out something to correct it."

Some people report that they can only pair one shoe with their app. Others say that the motors that tighten and loosen the shoes have stopped working altogether, according to The Verge. That means that the very expensive shoe is just about as useful as a slipper.

"App will only sync with left shoe and then fail every time," one reviewer said. "Also, app says left shoe is already connected to another device whenever I try to reinstall and start over."

While we all hope to someday see true hoverboards and self-lacing clothes, for now it seems we're stuck with just another dumb IoT app.

Brands We Love
This App Uses Karaoke to Get You Speaking New Languages
5. 17. 20
Read More
Brands We Love
Learn The Coding Skills You'll Need to Land Your Next Job With These Online Classes
5. 14. 20
Read More
Scream and Shout
"Aggression Detectors" Monitoring Students Don't Really Work
6. 26. 19
Read More
+Social+Newsletter
TopicsAbout UsContact Us
Copyright ©, Camden Media Inc All Rights Reserved. See our User Agreement, Privacy Policy and Data Use Policy. The material on this site may not be reproduced, distributed, transmitted, cached or otherwise used, except with prior written permission of Futurism. Articles may contain affiliate links which enable us to share in the revenue of any purchases made.
Fonts by Typekit and Monotype.