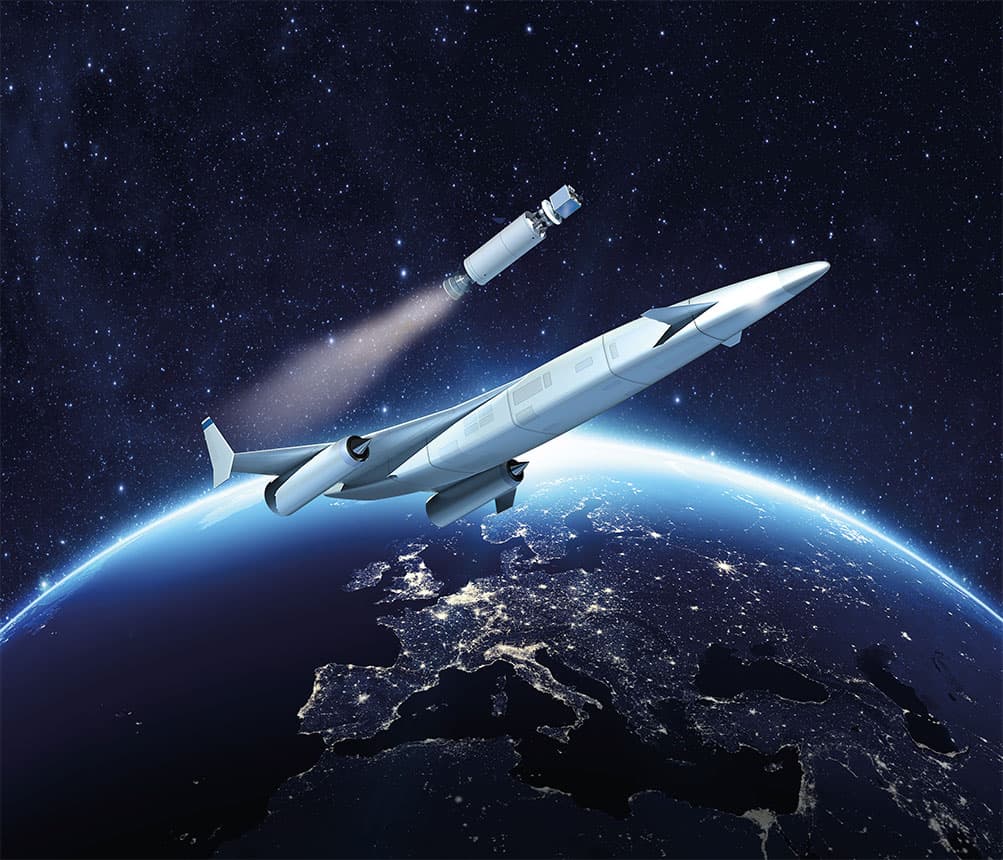 It could even be used to boost a space plane straight into orbit, the company says.

It could even be used to boost a space plane straight into orbit, the company says.

The makers of a new hypersonic rocket engine say it could whisk flights from London to Sydney in just four hours, traveling at five times the speed of sound. That's a flight that can take 20 hours on a conventional jetliner.

According to the BBC, UK company Reaction Engines says it's gearing up to test the futuristic craft in Colorado — a startling vision of the future of transportation that could also, if the engine lives up to the hype, inform the future of spaceflight.

Reaction Engines, which has backing from the Rolls-Royce and Boeing, calls the new rocket engine the Sabre. It inhales air at lower altitudes, but works more like a rocket when it gets higher up.

"The core can be tested on the ground, but it's the core that gets you air-breathing from the ground up to the edge of space, at which point there is no more oxygen to breathe and the system transitions to the pure rocket mode," said Shaun Driscoll, Reaction Engines' program director, according to the BBC.

The company also says the Sabre engine could push the frontiers of spaceflight, by sending crafts straight into orbit without multiple propellant stages, according to the BBC, which also reported that the the European Space Agency recently signed off on a design review for the Sabre engine.

"The positive conclusion of our Preliminary Design Review marks a major milestone in Sabre development," ESA's head of propulsion engineering Mark Ford told the broadcaster. "It confirms the test version of this revolutionary new class of engine is ready for implementation."

The Age of Hypersonic Flight Will Completely Change How We Travel
6. 30. 17
Read More
One of These Nine Routes Could Be Home to the First European Hyperloop
6. 6. 17
Read More
A View of the Future: Hyperloop Plans to Connect All Europe
1. 19. 17
Read More
+Social+Newsletter
TopicsAbout UsContact Us
Copyright ©, Camden Media Inc All Rights Reserved. See our User Agreement, Privacy Policy and Data Use Policy. The material on this site may not be reproduced, distributed, transmitted, cached or otherwise used, except with prior written permission of Futurism. Articles may contain affiliate links which enable us to share in the revenue of any purchases made.
Fonts by Typekit and Monotype.