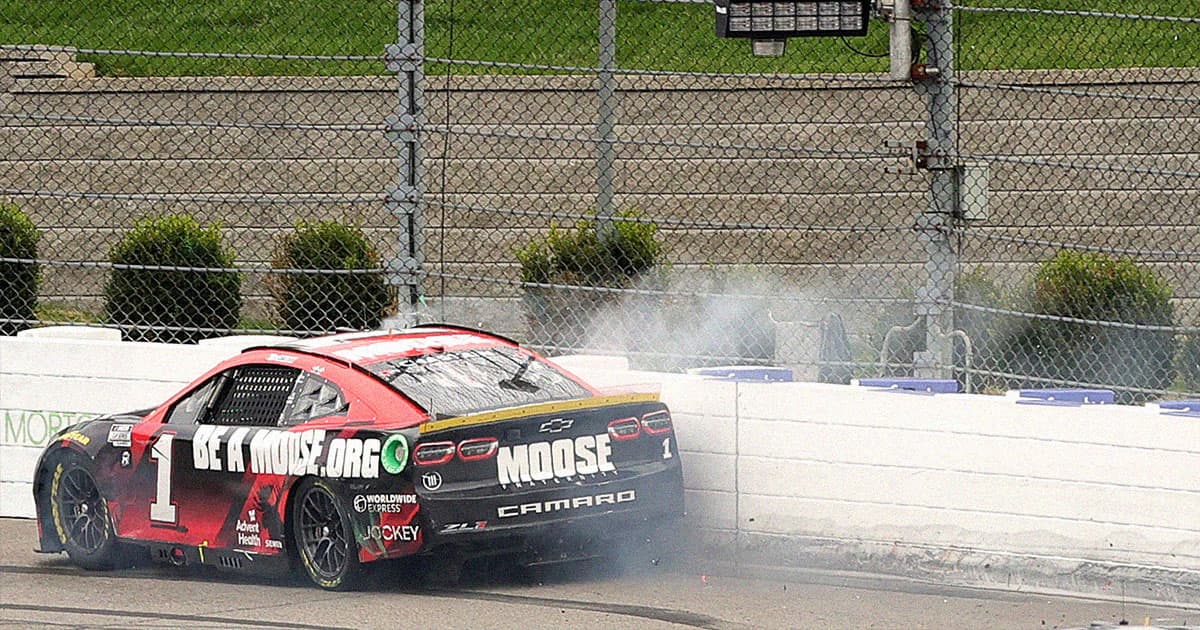 "I never knew it would actually work."

"I never knew it would actually work."

Most of us probably wouldn't admit that we learned something from a video game. But also, most of us aren't championship NASCAR drivers.

Ross Chastain is one such driver who was lagging behind at 10th place during Sunday's Xfinity 500 race. Then, in an extremely ballsy move on his last lap, he slingshotted his car along the racetrack's walls and blasted himself all the way up to 5th. The Hail Mary heroics clinched him a well-earned spot in the next stage of the Championship, not to mention widespread acclaim online, with people amusingly explaining the move in video game terms or outright attempting to recreate it in-game.

And where did he learn that maneuver? From playing video games as a kid, he says.

"I played a lot of NASCAR 2005 on the GameCube which I had growing up," Chastain said with a smile in a post-race interview. "I never knew it would actually work."

UNBELIEVABLE!@RossChastain floors it along the wall to go from 10th to 5th and advance to the CHAMPIONSHIP! #NASCARPlayoffs pic.twitter.com/9qX3eq7T6h

The game-breaking bug is called a "wall ride," and in all likelihood could only be pulled off in a track as short as the Martinsville Speedway, the site of the race. At only half a mile long, it's the shortest in NASCAR's circuit, which means its corners are pretty short, too, making the slingshotting especially dramatic.

Anyway, to onlookers, it really does look like Chastain activated an unfair speed boost or was just straight up hacking. Just listen to how blown away the crowd is in this video uploaded to Twitter.

Other racers on the track could hardly believe it either.

"I can't believe what I just saw," said one driver in a compilation by NASCAR. "That was straight video game."

But even digitally, it's not easy to replicate. Chase Briscoe, a NASCAR driver who finished in 9th place behind Chastain, uploaded a clip of himself trying to pull of a wall ride in the NASCAR Heat video game, only for his car to clip into a random bit of geometry and get sent spinning.

Except maybe in iRacing, a relentlessly realistic and competitive online racing simulator.

"I got banned on iRacing for doing it about 10 years ago," Briscoe tweeted. "It for sure works on there."

More on learning from video games: Good News, Gamers! That Screen Time Could Make You a Little Smarter, Scientists Say

Russian Block
Teen Sentenced to Prison for Plotting Terror Attack in Minecraft
Feb 11
Read More
Delete Twitter
Elon Musk Has Some Strong Opinions About Cyberpunk 2077
12. 14. 20
Read More
Brands We Love
Gamefly Gives You Access to Thousands of Video Game Titles for One Flat Fee
8. 3. 20
Read More
+Social+Newsletter
TopicsAbout UsContact Us
Copyright ©, Camden Media Inc All Rights Reserved. See our User Agreement, Privacy Policy and Data Use Policy. The material on this site may not be reproduced, distributed, transmitted, cached or otherwise used, except with prior written permission of Futurism. Articles may contain affiliate links which enable us to share in the revenue of any purchases made.
Fonts by Typekit and Monotype.