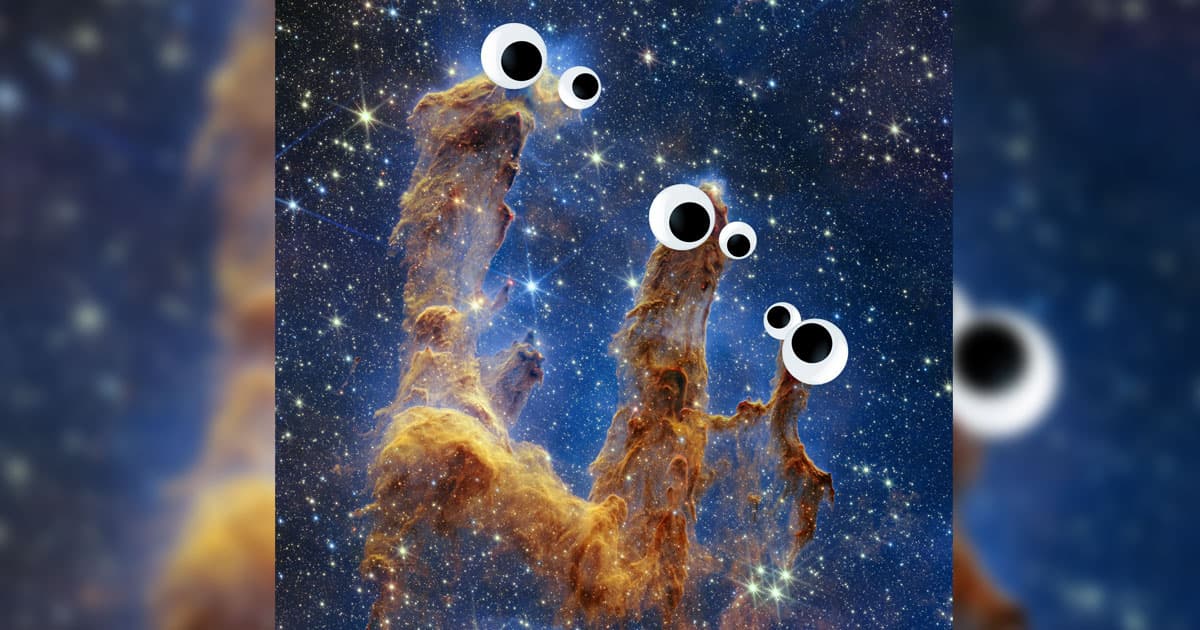 It's perfect. No notes.

It's perfect. No notes.

Is it real, or are we still just thinking about "Everything Everywhere All at Once?"

On Wednesday, NASA released the latest cosmic photo snapped by its James Webb Space Telescope: an absolutely mesmerizing shot of the space dust-filled star nursery known as the Pillars of Creation.

Then, a day later, a new photo dropped. Twitter user ScienceSocks — definitely not NASA — put googly eyes on the Pillars, because of course they did.

The Pillars of Creation, located in the Eagle Nebula, were first discovered in the mid-1990s. Researchers spotted the celestial crib — where plenty of stars are still being born — using Hubble, which resulted in a mesmerizing image for the ages.

The James Webb's latest image, as it's done for other cosmic discoveries, has breathed new life into the cosmic wonder — the sheer number of stars that dot the cosmos are that much clearer, while the color, texture, and composition of the dusty Pillars themselves are seen in greater detail than ever before.

The googly eyes, of course, take the iconic shot to a whole other level.

Netizens were quick to point out that Pillars' googly additions were strikingly reminiscent of a certain gaggle of puppets.

And, as far as we can tell, they're totally right.

Another keen-eyed cultural historian noted the DIY'd Pillars look very much like the anchovies from Spongebob. We would also venture that they're akin to Ursula's shriveled mer-prisoners from "The Little Mermaid" as well.

In any case, the Pillars are perfect — with or without the stick-on eyeballs.