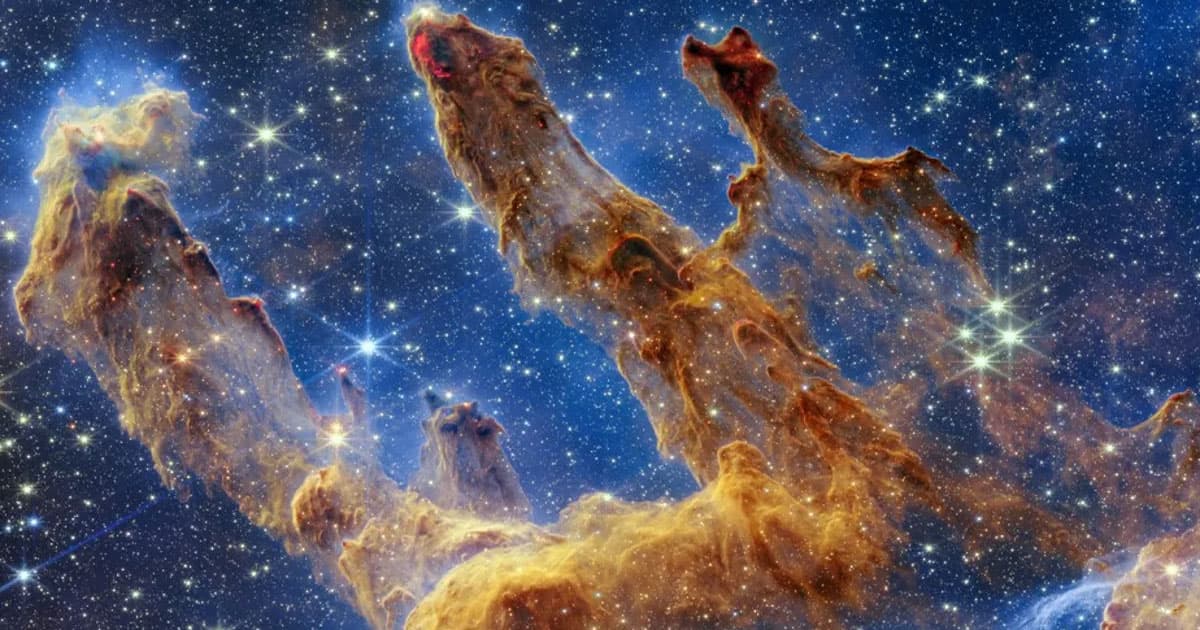 NASA's James Webb Space Telescope has consistently astonished us with its amazing snapshots of the cosmos — and its latest image released today by NASA is no exception.

This time, using its Near-Infrared Camera (NIRCam), the space observatory targeted the iconic Pillars of Creation. First photographed by the Hubble Space Telescope in 1995, the original image of the Pillars quickly became an object of fascination. To many, it remains the quintessential image of outer space.

And we're pleased to say that it now has a worthy successor. Just have a look at the inscrutable detail and colors of the new and improved photo below.

But, for maximum effect, we recommend visiting here to download the image in its full resolution, if your device has room.

This is what you’ve waited for.

Journey with us through Webb’s breathtaking view of the Pillars of Creation, where scores of newly formed stars glisten like dewdrops among floating, translucent columns of gas and dust: https://t.co/5ea1kCzU5x

The Pillars appear like the monolithic hand of a cosmic god being formed out of space dust. In reality, the image depicts something arguably just as fascinating: stars — some of them still being born — in the heart of the Eagle Nebula some 7,000 light years away.

At four to five light years across in size, it's unfathomably large to Earthlings, but a relatively small feature of the Nebula as a whole.

Still, there's plenty to behold. Take, for instance, the glowing red blobs at the boundaries of each "pillar." According to NASA's press release, those are the ejections of newly forming stars, which get their glowing red appearance from energetic hydrogen molecules.

As for the reddish spiky orbs, those are the newly formed stars themselves, only a couple of hundred thousand years old.

In general, you can see far more detail in the new image compared to the original, thanks to a massive bump in resolution. And that isn't just to the benefit of casual observers.

The clearer, more detailed imaging allows scientists to more accurately identify and keep track of nascent stars, NASA says. And from there, they can better understand how stars are formed, as well as how frequently that occurs.

It's an overwhelmingly dazzling image that demonstrates both the James Webb's groundbreaking capabilities and the astounding beauty of the cosmos that we're only beginning to uncover.