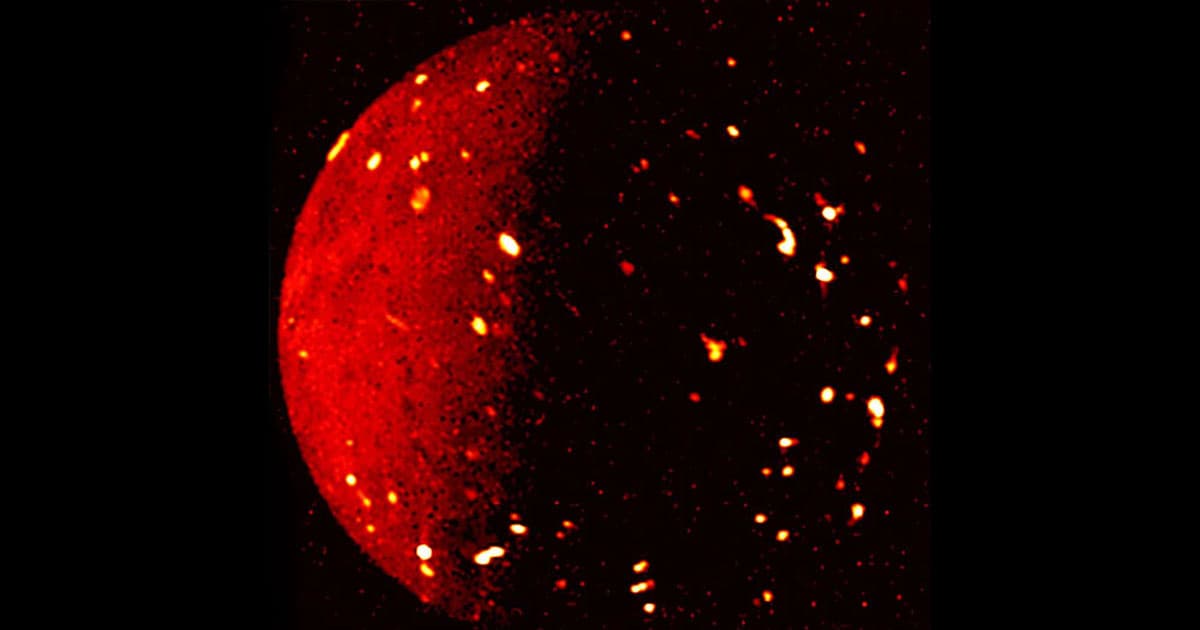 It's the most volcanically active moon in the solar system.

It's the most volcanically active moon in the solar system.

NASA has released a stunning infrared image of Jupiter's moon Io, snapped from a mere 50,000 miles away.

The image, taken this past summer by the space agency's Juno spacecraft and just now revealed to the public, shows incredible detail on the celestial body's volcanically active surface.

Scientists suspect Io is covered in hundreds of volcanoes, some of which spurt fountains of lava dozens of miles off the surface. According to NASA, it's the most volcanically active moon in the solar system.

The observations could lead to some fascinating new insights into Jupiter's fourth-largest moon.

"You can see volcanic hotspots," Scott Bolton, principal investigator for NASA's Juno spacecraft, told reporters on Wednesday, as quoted by Insider. "We've been able to monitor over the course of the primary mission — over 30 orbits — how this changes and evolves."

Juno has been in Jupiter's orbit for the last six years and has completed several flybys of the planet's many moons as well.

"With each close flyby, we have been able to obtain a wealth of new information," Bolton said in a statement. "Juno sensors are designed to study Jupiter, but we’ve been thrilled at how well they can perform double duty by observing Jupiter’s moons."

Juno has also examined the incredibly thick ice crusts covering Jupiter's moons Ganymede and Europa. Its instruments were able to probe the temperature and purity of these ice shells to a depth of roughly 15 miles below the surface.

As for Io, Juno will fortunately have an even closer look at the moon today, the first of nine planned flybys. Juno will come within just 930 miles away for two of them, according to NASA.

That means scientists will be able to complete the first-ever "high-resolution monitoring campaign" to see how Io's many volcanoes and their eruptions interact with its magnetosphere.

And we can't wait to see the results.