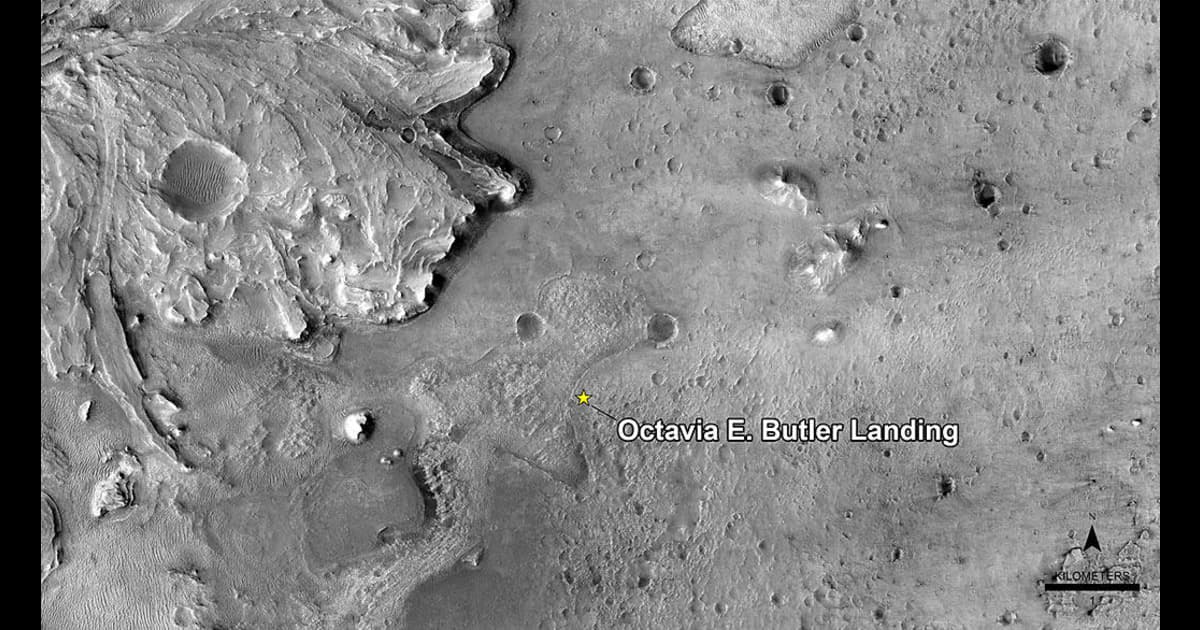 Written In The Stars

Her legacy lives on.

Her legacy lives on.

NASA has announced that the official name of the Perseverance Rover touchdown site is "Octavia E. Butler Landing," in honor of the late, award-winning science fiction writer.

The agency made their announcement on Friday during a press conference detailing Percy's recent drive along the Martian surface, according to Space.com.

"Butler's pioneering work explores themes of race, gender equality in humanity, centering on the experiences of Black women at a time when such voices were largely absent from science fiction," said Katie Stack Morgan, Perseverance's deputy project scientist at NASA's Jet Propulsion Laboratory in Pasadena, California, during the conference.

The location can be seen in the image below marked with a yellow star:

Honestly, we can’t think of a more deserving person for the landing site to be named after — and we're are glad NASA thinks so too.

Butler's books, which garnered her both Nebula and Hugo awards, covered a gamut of subjects and themes like biting critiques of racism and sexism, alien symbiotes bonding with humans, and the devastating aftermath of the climate crisis. Butler, who passed away in 2006, spearheaded sci-fi that has inspired an entire generation of POC writers, artists, and scientists to pursue work that they might not have otherwise.

"Butler inspired and influenced the planetary science community and many beyond — including those typically underrepresented by STEM fields," Morgan continued. "The fact that her works are as relevant today — if not more so — than when they were originally written and published is a testament to her vision, genius, and timelessness."

The spot where @NASAPersevere began its journey on Mars now bears the name “Octavia E. Butler Landing." Groundbreaking author @OctaviaEButler is a perfect fit for this mission, as her main characters embody overcoming challenges.

Octavia E. Butler Landing is part of a tradition at NASA of naming otherworldly locations, landmarks, and spacecraft after inspirational writers and artists who have left an indelible mark on the scientific community.

For example, the landing site where the Curiosity Rover landed in 2012 in the Gale Crater was named after fellow science fiction writer Ray Bradbury. In 1997, NASA named the Mars Pathfinder spacecraft the Carl Sagan Memorial Station after the lauded astronomer and television host.

Now Butler, who also became the first sci-fi writer to receive a MacArthur Fellowship in 1995, will permanently have her name and legacy etched in the surface of Mars — and we can’t think of a more fitting honor.

More on books: This Ebook Company Is Trying to Make Reading More Like Videogames