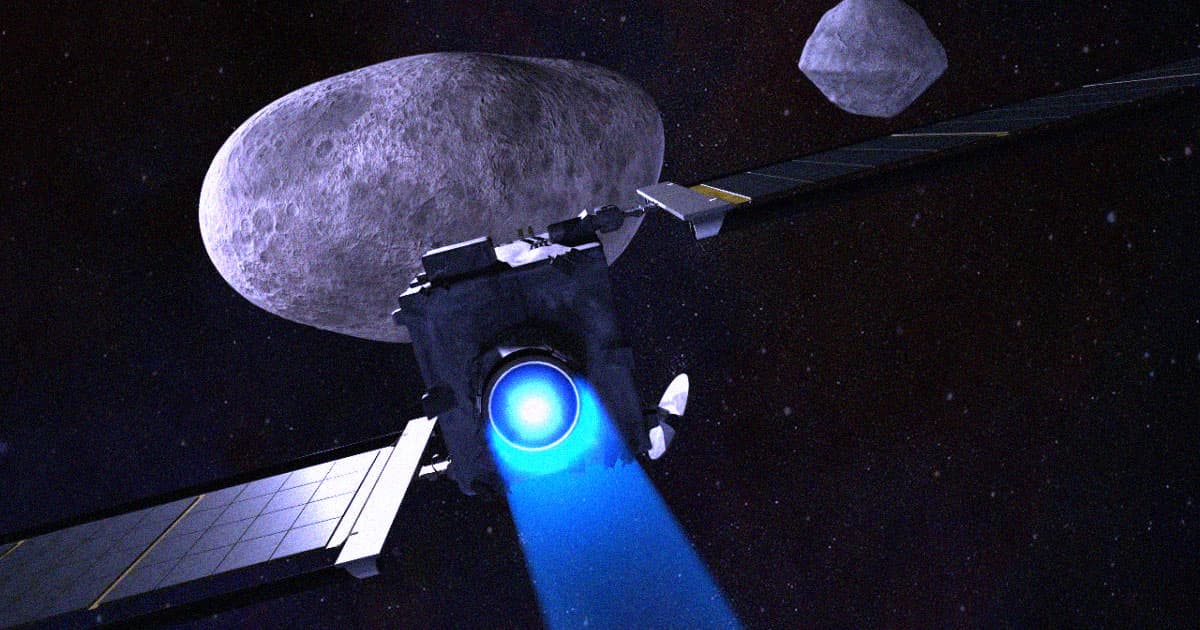 The technology is straight out of a science fiction movie.

The technology is straight out of a science fiction movie.

NASA is launching a spacecraft destined to slam into an asteroid as part of its Double Asteroid Redirection Test (DART) mission tonight, from the Vandenberg Space Force Base in California. Its purpose: to test whether we're capable of deflecting a killer asteroid before it strikes Earth.

But before it meets its final destination, NASA is using the spacecraft to test out brand new ion drive technology — and it's straight out of a science fiction movie.

The space agency's Evolutionary Xenon Thruster-Commercial (NEXT-C) uses the spacecraft's solar power to create an electrical field. This field then accelerates a xenon propellant to speeds of up to 90,000 mph, harnessing the resulting stream of "thousands of ion jets" as propulsion.

It's not exactly a massive step up in power. The thruster generates a measly 236 micro Newtons of thrust, a tiny fraction of a much larger, fuel-based rocket engine.

But NEXT-C is still a major step up in power over previous ion propulsion systems used for other NASA missions.

The goal is to demonstrate that tiny spacecraft like DART are capable of propelling themselves on solar energy — and a relatively small amount of xenon fuel — alone by firing thrusters continuously for months or even years at a time.

Thanks to the complete lack of resistance, the thruster will be able to slowly accelerate the DART spacecraft up to 15,000 mph before it makes impact with the asteroid.

It's an exciting prospect. Ion drives could one day help make deep space exploration a reality, ending our reliance on using up much of a spacecraft's payload for fuel tanks — and deep space probes are the perfect testbed.

More on DART: Massive Asteroid That Could Obliterate Earth to Fly By, Case the Joint