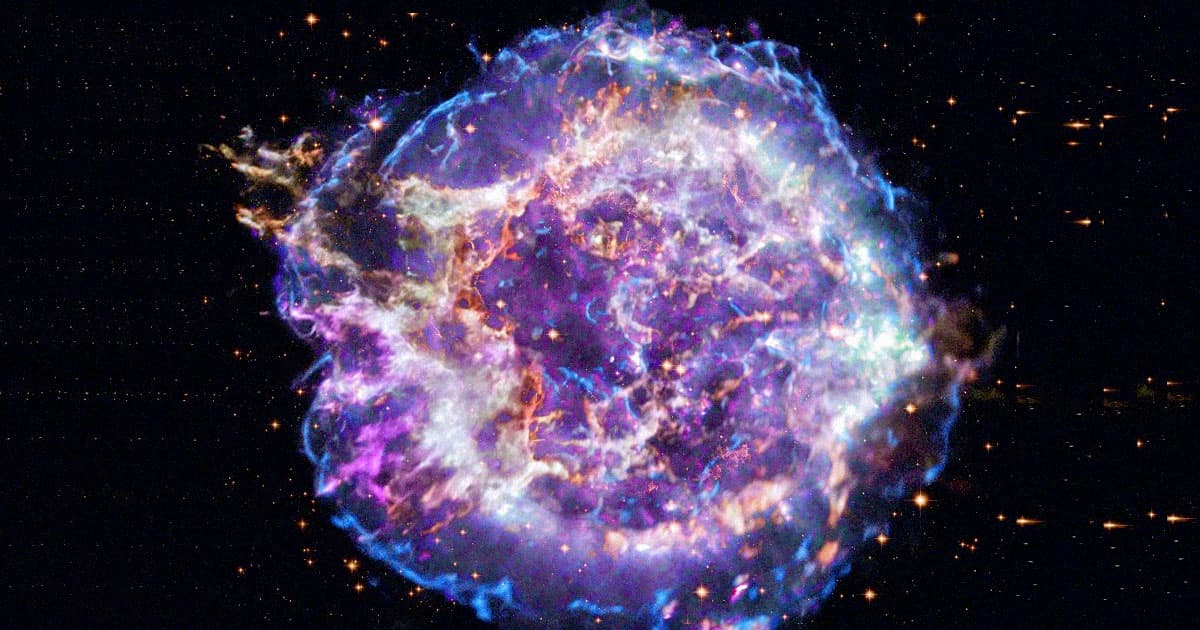 NASA Releases Hubble Images of Star Right as It Explodes

"I think that's probably one of the most amazing things I've ever seen!"

"I think that's probably one of the most amazing things I've ever seen!"

To see a star right as it explodes in a supernova is extremely rare. Luckily, researchers combing through the archives of the Hubble Space Telescope's observational data from 2010 have spotted imagery of an exploding star from some 11 billion years ago, lurking behind a galaxy cluster — making it the first time such an event has been observed from so early in the universe.

"It is quite rare that a supernova can be detected at a very early stage, because that stage is really short," said Wenlei Chen, who is the lead author of an accompanying study published in the journal Nature and a researcher at the University of Minnesota School of Physics and Astronomy, in a NASA statement.

"It only lasts for hours to a few days, and it can be easily missed even for a nearby detection," he added. "In the same exposure, we are able to see a sequence of the images — like multiple faces of a supernova."

Learn more in this video! pic.twitter.com/yZbK6ZrMMJ

The faraway supernova was revealed due to a phenomenon known as gravitational lensing. When the gravity of a galaxy warps and magnifies the light behind it, it allows telescopes to observe distant objects that would otherwise be too faint.

Amazingly, the warping proved to be an even greater boon than expected, because it resulted in multiple images, or "three faces," from different time periods to be captured in one go. Light from separate moments in the supernova traveled varying distances through the lensing and were in effect slowed down due to the immense gravity of the lens galaxy, causing the different "routes" of light to all arrive at the same time.

Thanks to that instant timelapse, the researchers were able to measure the supernova's rate of cooling and calculated the star's size before it exploded. They believe it was a red giant over 500 times larger than the Sun.

"You see different colors in the three different images," said Patrick Kelly, who led the study and is an assistant professor in the University of Minnesota's School of Physics and Astronomy, in the statement. "You've got the massive star, the core collapses, it produces a shock, it heats up, and then you're seeing it cool over a week. I think that's probably one of the most amazing things I've ever seen!"

More on stars: Astronomers Find Wreckage of Destroyed Solar System Right Near Our Own

Hubble Surprise
Hubble Takes Another Incredible Picture After Gyroscope Failure
11. 29. 18
Read More
Eyes Up Here
New AI Is Peering Into the Nuclear Cores of Distant Stars
11. 16. 18
Read More
Get Ready to See the Largest Picture of the Universe Ever Taken
12. 27. 17
Read More
+Social+Newsletter
TopicsAbout UsContact Us
Copyright ©, Camden Media Inc All Rights Reserved. See our User Agreement, Privacy Policy and Data Use Policy. The material on this site may not be reproduced, distributed, transmitted, cached or otherwise used, except with prior written permission of Futurism. Articles may contain affiliate links which enable us to share in the revenue of any purchases made.
Fonts by Typekit and Monotype.