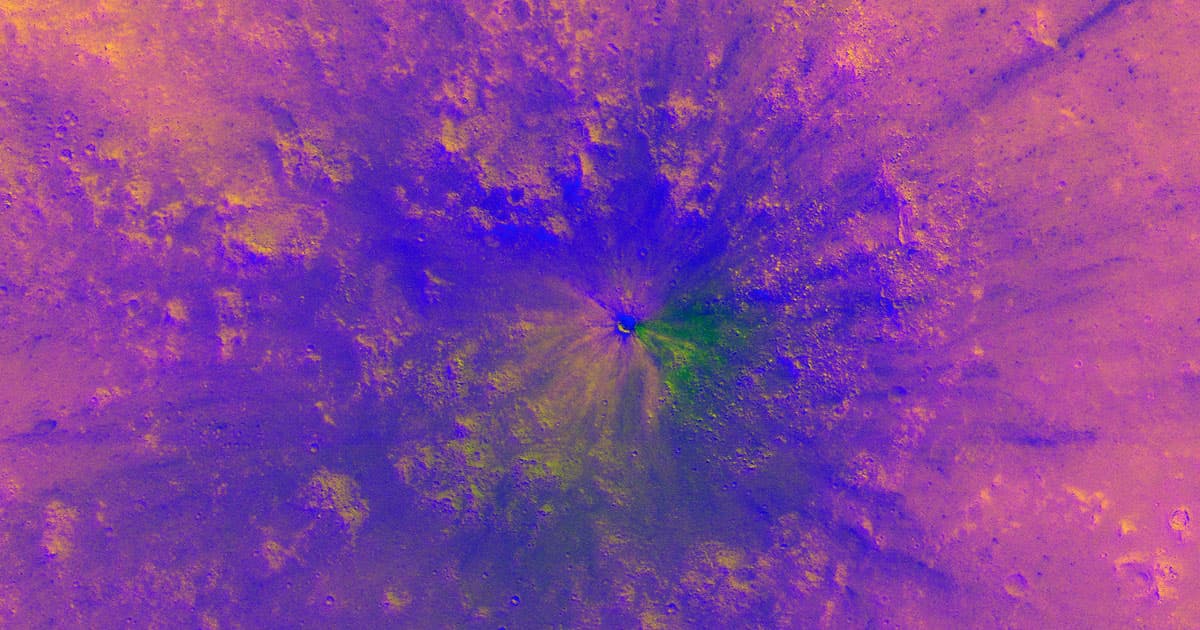 The Red Planet got nailed sometime in the last three years.

The Red Planet got nailed sometime in the last three years.

Sometime in the last three years, Mars got nailed by some sort of space rock — and NASA just found the brand-new crater.

NASA didn't get to watch the impact in real time; the crater was spotted and photographed by the space agency's Mars Reconnaissance Orbiter, which last checked that area in September 2016, Space.com reports. And the unusually colorful crater — more on that later — is a dazzling reminder of how violent outer space can be.

The crater stands out because of its distinctly blue smudge, which spreads about 2,600 square feet across the surface of Mars. Veronica Bray, the scientist who imaged the crater, told Space.com that the impact blew away dust from the surface to reveal darker-colored rock below. She added that there's a chance the unusual blue color is a sign of ice that had been hiding just beneath the surface.

KABOOM! Before and after images of a meteorite forming a brand new impact crater on Mars. Sometime between 18 Feb 2017 and 20 March 2019. pic.twitter.com/TWXtUoP5NA

"It is a reminder of what's out there," Bray told Space.com. "It's a gorgeous [crater.] I'm glad I got it in the color strip."

Based on the size of the crater, NASA scientists think that the space rock was likely about five feet long and denser than most objects that hit Mars.

While it left a massive mark on Mars' surface, a rock that small would have been destroyed as it entered Earth's atmosphere, Bray told Space.com.

"This kind of blew me away," Mars researcher Peter Grindrod told the site. "I'd never seen anything like that."

More on Mars: See the Most Breathtaking Views of the Martian Surface Yet