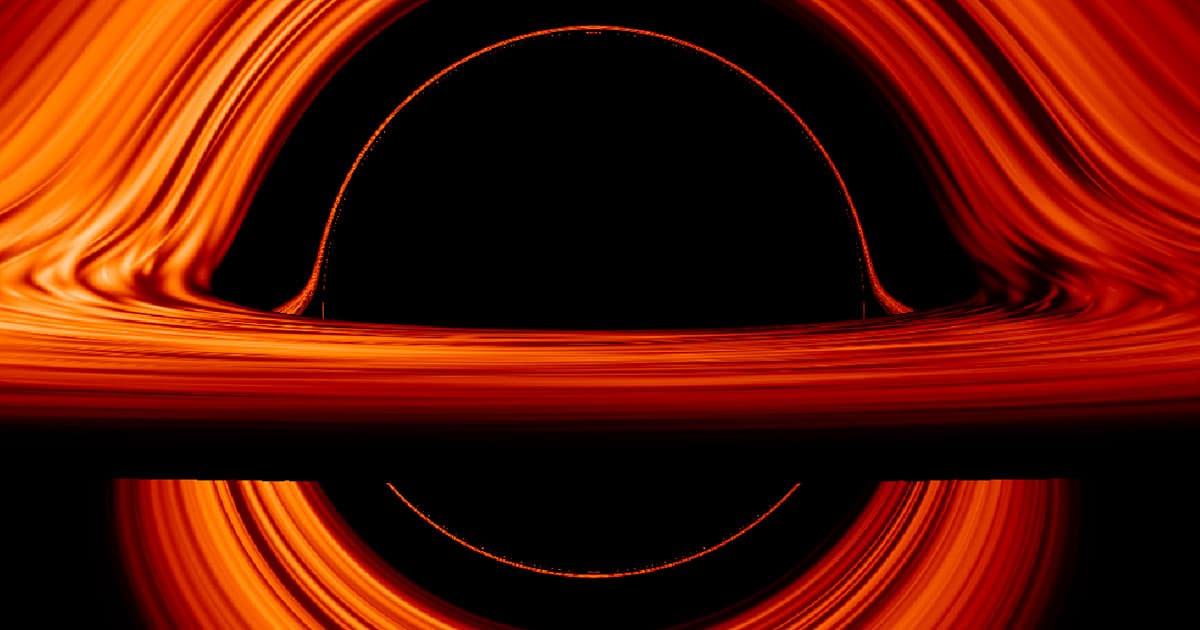 A new trippy visualization by NASA researchers shows how a black hole distorts its appearance by skewing the matter around it and warping the light itself with its immense gravity.

Gigantic black holes often appear at the center of large galaxies, where they pack an immense amount of matter into a tiny space. The resulting gravitational field eats up everything, including light.

In the visualization, the yellow highlights are twisting magnetic fields as they're making their way through churning gas. The inside gas nearest to the hole itself orbits the hole at almost the speed of light, according to a NASA statement.

The reason it has separate rings jutting out of the bottom is because of intense gravitational forces bending the light emitted by the disk, thereby providing a view of the disk's underside.

A team of scientists used NASA's Event Horizon Telescope to snap the first-ever image of a black hole to the world back in April. Scientists are already working on getting an even crisper, higher resolution shot using two or three satellites.

NASA also helpfully included a labelled image of the highlights of its visualization.

READ MORE: New NASA Visualisation of a Black Hole Is So Beautiful We Could Cry [ScienceAlert]

Black Hole Snapshot
Scientists Release Image of Black Hole at Center of Our Galaxy
5. 12. 22
Read More
Into Darkness
Inside NASA's Bold Proposal to Probe the Mysteries of Dark Matter
3. 11. 22
Read More
The Last Strand
Scientists Puzzled by Weird "Strands" at the Center of Our Galaxy
1. 26. 22
Read More
+Social+Newsletter
TopicsAbout UsContact Us
Copyright ©, Camden Media Inc All Rights Reserved. See our User Agreement, Privacy Policy and Data Use Policy. The material on this site may not be reproduced, distributed, transmitted, cached or otherwise used, except with prior written permission of Futurism. Articles may contain affiliate links which enable us to share in the revenue of any purchases made.
Fonts by Typekit and Monotype.