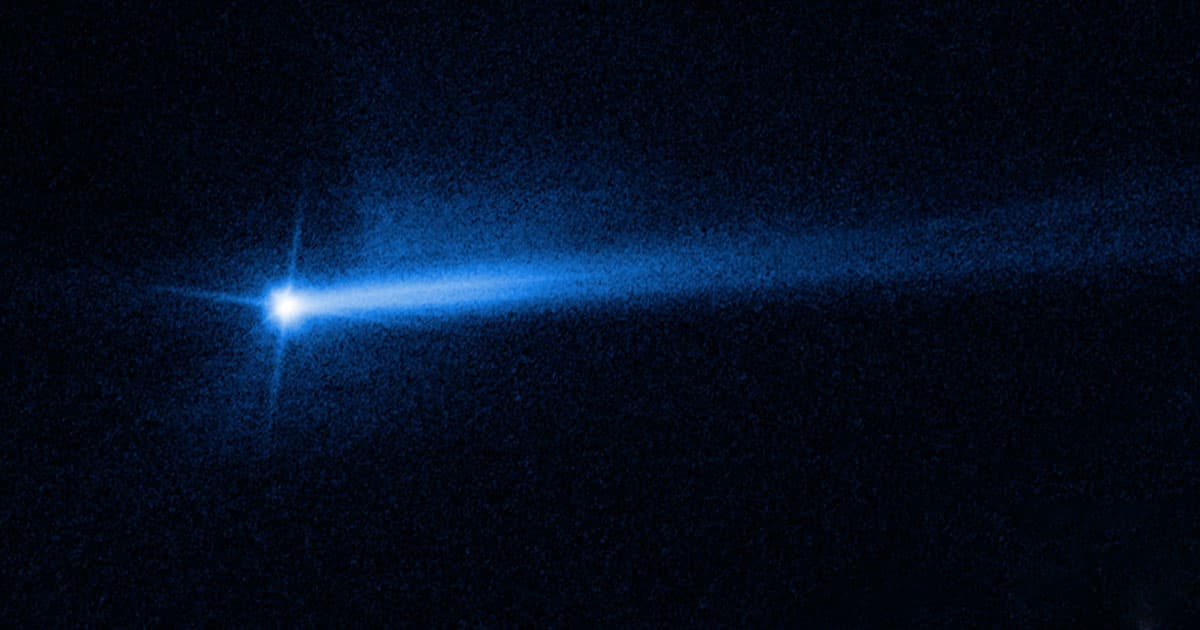 Astronomers are "both surprised and puzzled."

Astronomers are "both surprised and puzzled."

NASA has announced that after successfully smashing its Double Asteroid Reduction Test (DART) into an asteroid, the space rock formed two comet tails — not one — roughly a week after impact, confounding astronomers.

In a blog post, NASA noted that its Hubble Space Telescope spotted the second tail resulting from the impact with asteroid Didymos, providing astronomers with "a more complete picture" of what really went down.

Comets eject dust and gas as they scream through the Solar System, forming tail-like formations behind them.

Didymos, a tiny "near-Earth" space rock, formed a tail once NASA's spacecraft bashed into it. And now, that tail has a mysterious twin.

"The twin tail is an unexpected development, although similar behavior is commonly seen in comets and active asteroids," NASA said, which "has both surprised and puzzled astronomers," as the agency's Hubble account noted on Twitter.

New observations from Hubble of the Dimorphos impact by NASA’s DART spacecraft has revealed the clearest image of a stunning development to the asteroid system—a second tail of ejecta.

Though NASA has some pretty excellent images of the post-DART double tail, the space agency admitted that its scientists still don't really know what's going on here yet.

"The relationship between the comet-like tail and other ejecta features seen at various times in images from Hubble and other telescopes is still unclear," the update notes, "and is something the Investigation Team is currently working to understand."

NASA added that the second tail is "newly developed," and that "there are a number of possible scenarios the team will investigate," but didn't expand on what those scenarios could be.

All the same, this stunning view of the resulting aftermath beautifully demonstrates how much we still have to learn about asteroids, comets, and their tails.