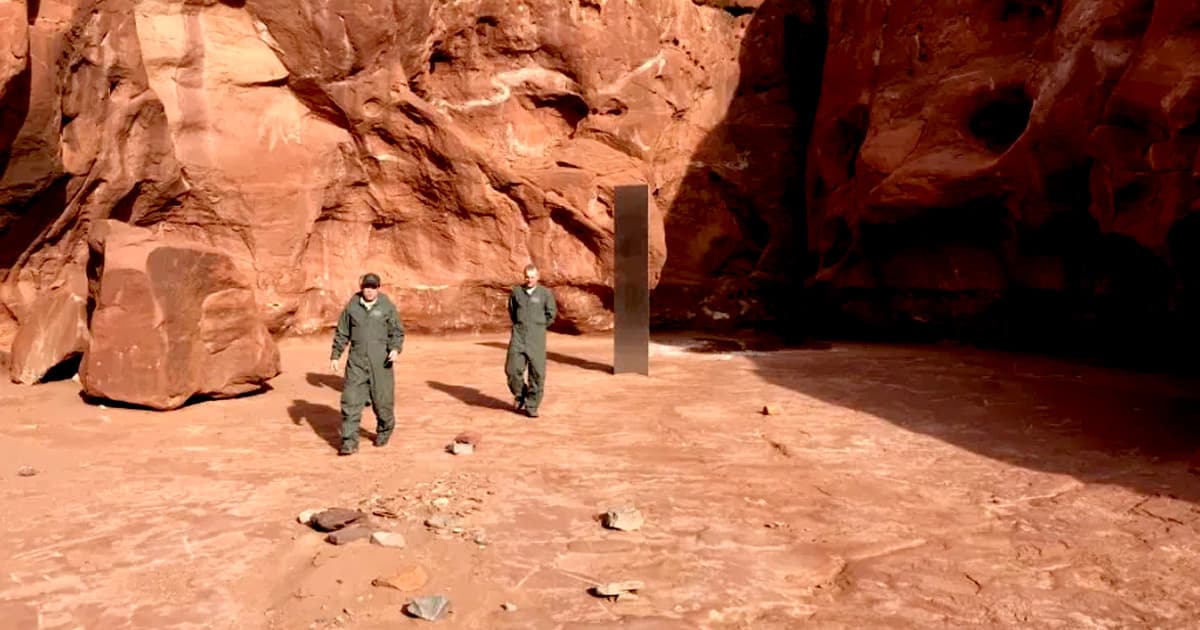 Don't Stare At It For Too Long

Utah Authorities Say Mysterious Monolith Is Illegal, Even If Aliens Put It There

"It is illegal to install structures or art without authorization on federally managed public lands, no matter what planet you’re from."

"It is illegal to install structures or art without authorization on federally managed public lands, no matter what planet you’re from."

While counting bighorn sheep from a helicopter in the Utah wilderness, Utah Highway Patrol pilot Bret Hutchings made an eyebrow-raising discovery: a shiny metal monolith about ten to 12 feet tall.

It looked like something straight out of the 1968 film "2001: A Space Odyssey," prompting humor and wild speculation on social media.

Was it an extraterrestrial species coming to send a message or was it a particularly ambitious art installation in the middle of nowhere?

Either way, the Utah Department of Public Safety would please like for it to not be there, as local news station KDVR reports.

"It is illegal to install structures or art without authorization on federally managed public lands, no matter what planet you’re from," read an official and amusingly tongue-in-cheek statement. "The Bureau of Land Management will be determining if they need to investigate further."

Officials still have no clue where the monolith came from or who it belongs to.

"We were kind of joking around that if one of us suddenly disappears, then the rest of us make a run for it," Hutchings told KSLTV over the weekend.

Nothing to See Here

The Utah Department of Public Safety — which referred to it as an "installation" in its statement — is keeping the exact location a secret.

"The exact location of the installation is not being disclosed since it is in a very remote area and if individuals were to attempt to visit the area, there is a significant possibility they may become stranded and require rescue," the statement reads.

READ MORE: “No matter what planet you’re from” this monolith is illegal in Utah [KDVR]