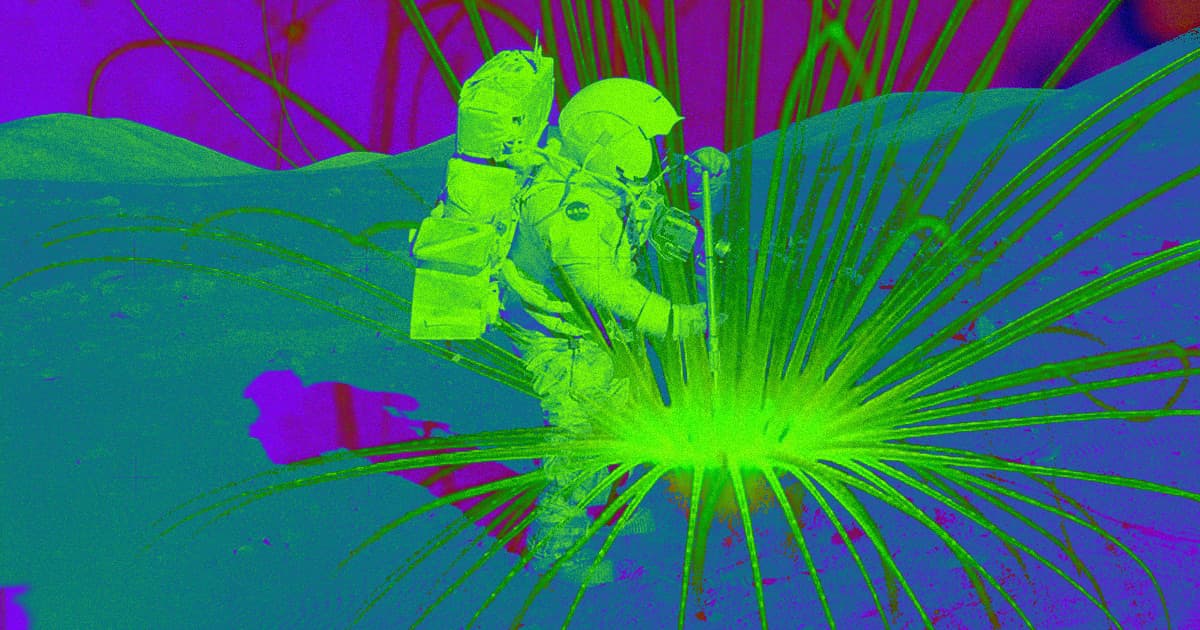 Electricity in the Air

It's not just lunar dust that astronauts have to worry about.

It's not just lunar dust that astronauts have to worry about.

The Moon's lack of an atmosphere and magnetic field means particles from the Sun go straight to the lunar surface.

That gives the Moon's surface an electric charge — and it mean future astronauts run the risk of being zapped when they visit the Moon, according to University of Southern California plasma physicist Joseph Wang's research, as Gizmodo reports.

Wang's team found that the electrically charged lunar surface "raises concerns on possible charging/arcing risks for astronauts on lunar surface," according to the abstract of his team's paper, which it presented at this year's meeting of the American Geophysical Union in San Francisco.

It's not unlike the experience of (Moon) walking across a carpet wearing socks and then feeling a zap when you touch a metal doorknob — except without an atmosphere, you wouldn't even need to make contact with the doorknob on the Moon.

So why haven't astronauts been zapped just yet? That's because the areas they visited during past missions were bathed in direct sunlight, according to Wang, and the photons from that light helped balance out the surface's otherwise negative charge, making shocks far less likely.

Future missions, however, will see astronauts visiting the Moon's south pole, which gets far less sunlight.

Jim Rice, a senior scientist at the Planetary Science Institute in Arizona, told Gizmodo he doesn't think electrocution should be an actual concern for those astronauts. But he also didn't rule out issues with larger future operations, such as ones that might involve bulldozing large amounts of charged materials around on the Moon.

READ MORE: Why the Next Lunar Astronauts May Have to Worry About Electric Shocks [Gizmodo]

More on the lunar surface: NASA: Four Astronauts Will Stay on the Moon For Two Weeks

Moon Wrestling
The Head of NASA Is Scared Chinese Astronauts Will Seize Portions of the Moon
Jan 3
Read More
God Shot
Astronaut Says He Had Religious Experience During Spacewalk
9. 9. 22
Read More
Next Time
NASA Cancels First Launch Attempt of Uber Expensive Moon Rocket
8. 29. 22
Read More
+Social+Newsletter
TopicsAbout UsContact Us
Copyright ©, Camden Media Inc All Rights Reserved. See our User Agreement, Privacy Policy and Data Use Policy. The material on this site may not be reproduced, distributed, transmitted, cached or otherwise used, except with prior written permission of Futurism. Articles may contain affiliate links which enable us to share in the revenue of any purchases made.
Fonts by Typekit and Monotype.