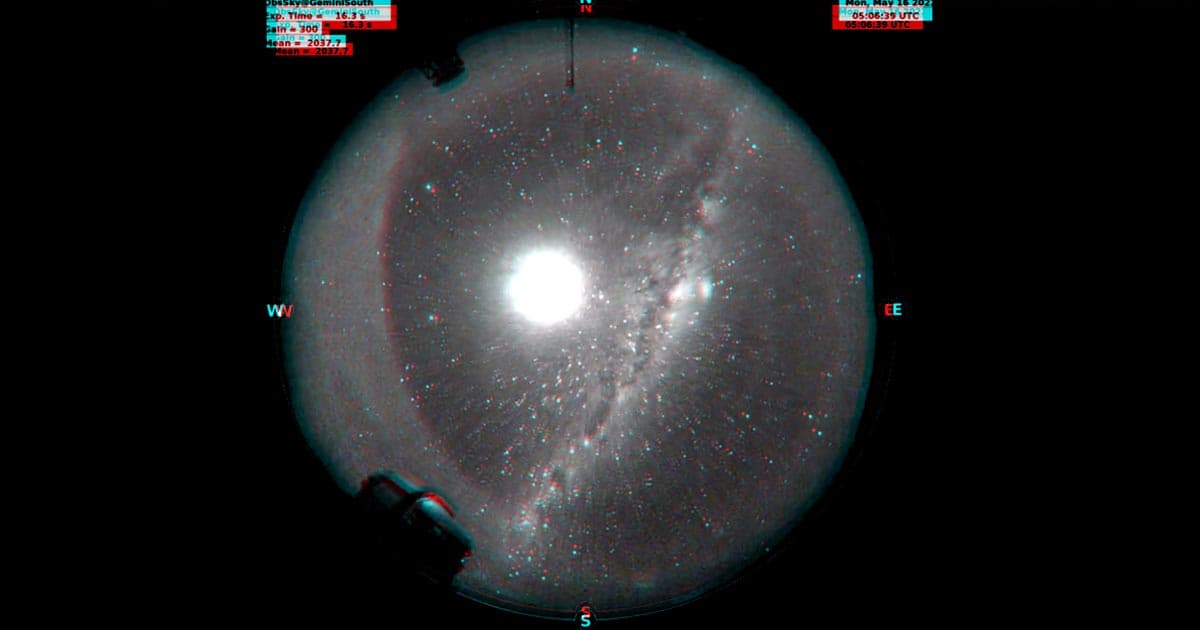 Talk about a total eclipse of the heart.

Talk about a total eclipse of the heart.

For a brief and shining moment, this week's lunar eclipse allowed a stunning view of our lovely home, the Milky Way galaxy.

Video of the spectacular event was captured by the Gemini Observatory's All-Sky camera at its facilities on Hilo, Hawaii. In the three seconds at approximately 5:30 PM local time that the Sun, Earth, and Moon aligned and thus placed the Moon in our planet's shadow (known as the totality), it was dark enough for the far reaches of our galaxy to be viewed from Gemini's powerful telescope.

Apparently, one didn't even need Gemini's uber-powerful telescopic camera to see the Milky Way during the eclipse, either.

Multiple photographers posted the images they captured of the spectacular event — and one Canadian photog even got a spectacular panorama of both the Milky Way and the Aurora Borealis in one shot.

This eclipse also presented an opportunity for notorious scientific wonder-denier Neil deGrasse Tyson to insist that eclipses are altogether "un-spectacular" — which caused a number of irked responses from skywatchers, as well as, uh, the Wendy's fast food chain.

As one of said responders noted, seeing the Milky Way isn't all that uncommon — but that doesn't make it any less awe-inspiring.

"The Milky Way can be seen most nights in the summer if you’re away from light pollution," they wrote, "and I’m in awe every time I see it."

More skywatching: Remember When the Sun Shot a Ball of Plasma at the Earth? It Hit and Caused a Beautiful Aurora

Space Telescope Sale
Someone's Selling a NASA Space Telescope on Craigslist for $10 Million
12. 22. 21
Read More
Distinct Kink
The Milky Way is a Lot More Warped Than Scientists Thought
2. 4. 19
Read More
Black Hole Sun
Here's the Best-Ever Image of the Black Hole Devouring Our Galaxy
1. 21. 19
Read More
+Social+Newsletter
TopicsAbout UsContact Us
Copyright ©, Camden Media Inc All Rights Reserved. See our User Agreement, Privacy Policy and Data Use Policy. The material on this site may not be reproduced, distributed, transmitted, cached or otherwise used, except with prior written permission of Futurism. Fonts by Typekit and Monotype.