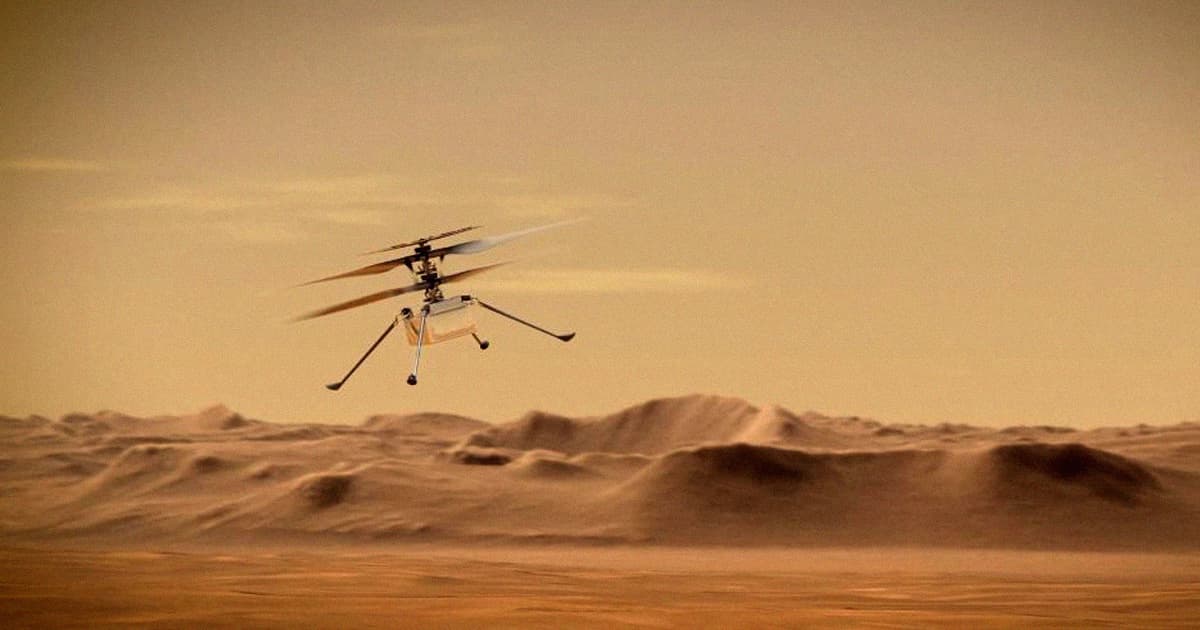 After its first groundbreaking flight on the surface of Mars, NASA's Mars helicopter Ingenuity successfully took off for the second time this morning.

And this time it went "bigger," according to NASA's Jet Propulsion Lab — a longer and more nimble flight that really managed to show off the copter's capabilities.

"Go big or go home!" read a JPL tweet celebrating the flight, accompanied by a stunning black-and-white image showing the shadow of the four-pound helicopter as it hovered over the Martian surface.

Go big or go home! The #MarsHelicopter successfully completed its 2nd flight, capturing this image with its black-and-white navigation camera. It also reached new milestones of a higher altitude, a longer hover and lateral flying. pic.twitter.com/F3lwcV9kH2

Ingenuity pull off a Tony Hawk-worthy trick on its flight this morning.

After moving sideways, Ingenuity came to a stop, hovered in place, and then turned to point its color camera in different directions before heading back to the middle of the "Wright Brothers Airfield."

"Of course, all of this is done autonomously, based on commands we sent to Perseverance to relay to Ingenuity the night before." Ingenuity's principal investigator MiMi Aung wrote in a blog update prior to the second flight attempt.

Just like during Ingenuity's maiden voyage, NASA's Mars rover Perseverance was watching from about 210 feet away with both its navigation cameras and the Mastcam-Z imagers, a mast-mounted camera system that has a zoom function, pointed at the action.

On Monday morning, Ingenuity spun up its two blades and took off to hover for roughly 30 seconds at ten feet above the Martian surface, becoming the first manmade object to achieve powered, controlled flight off the surface of another planet.

The team will keep pushing the little rotorcraft in the coming weeks. Aung and her team are planning to fly it at least three more times within the next 14 days.

Little Boxes
One Silly Little Detail Is Reportedly Delaying Artemis II by Years
Thursday
Read More
Martian Oases
Scientist Proposes Growing a Forest Inside a Bubble on Mars
Dec 3
Read More
Putting Things In Perspective
Amazing Artemis Photo Shows Every Human, Alive or Dead, Plus the Moon
Nov 29
Read More
+Social+Newsletter
TopicsAbout UsContact Us
Copyright ©, Camden Media Inc All Rights Reserved. See our User Agreement, Privacy Policy and Data Use Policy. The material on this site may not be reproduced, distributed, transmitted, cached or otherwise used, except with prior written permission of Futurism. Articles may contain affiliate links which enable us to share in the revenue of any purchases made.
Fonts by Typekit and Monotype.