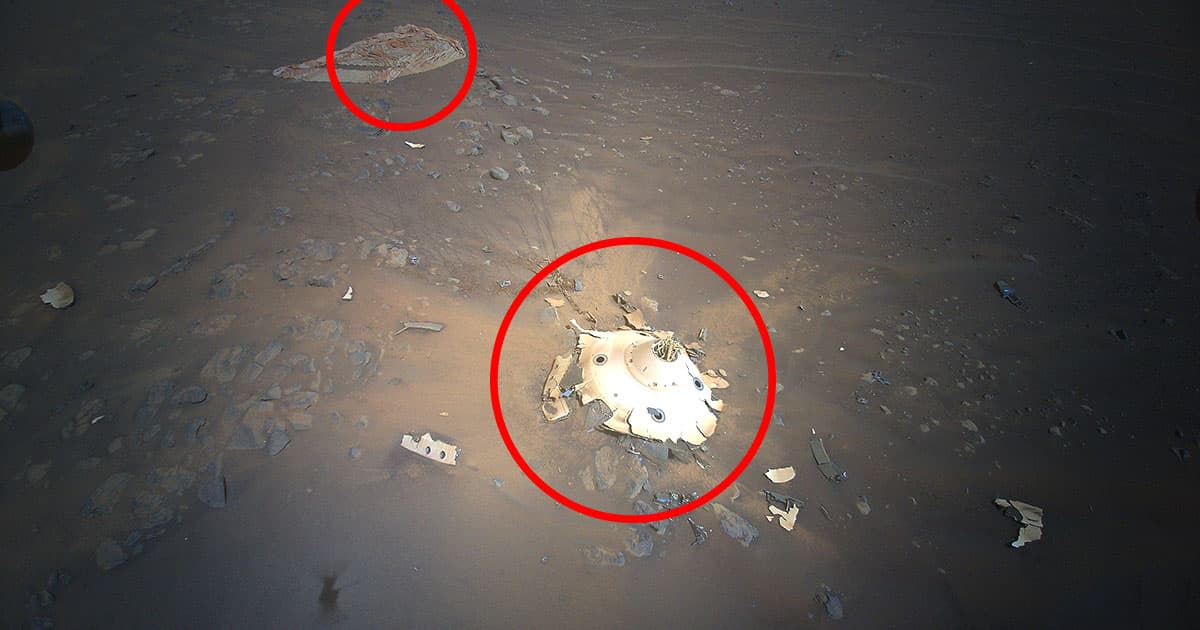 What an amazing view!

What an amazing view!

NASA's Mars helicopter Ingenuity has officially spotted the remains of the parachute and back shell that allowed it and the much bigger Perseverance rover to touch down on the surface of the Red Planet over a year ago.

Earlier this month, images taken by the rover's mast cam showed glimpses of the remains of the parachute from an estimated half a mile away.

Now, we get a much closer and detailed view of the backshell that protected it during its descent through the Martian atmosphere, as well as the discarded parachute farther in the distance — all thanks to the aerial prowess of Perseverance's much smaller and lighter helicopter companion.

"The Mars helicopter flew over Perseverance’s parachute and back shell," Ars Technica senior space writer Eric Berger tweeted, "and I have to say being able to fly on another world is amazing."

As seen on NASA's handy live map, Perseverance and Ingenuity have spent several weeks backtracking on their journey south of the Jezero Crater, an area believed to be an ancient lake bed.

And indeed, during Ingenuity's latest and 26th flight, the helicopter met "an additional challenge": the "presence of hardware from Perseverance's entry, descent, and landing (EDL), including the sky crane, parachutes and backshell," according to an April 5 update.

Ingenuity has exceeded all expectations, far surpassing the original five flights it was intended to complete. So it's only appropriate for it to return to the site of its landing to complete its victory lap.

More on the parachute: NASA Rover Finds Its Own Parachute in Martian Desert