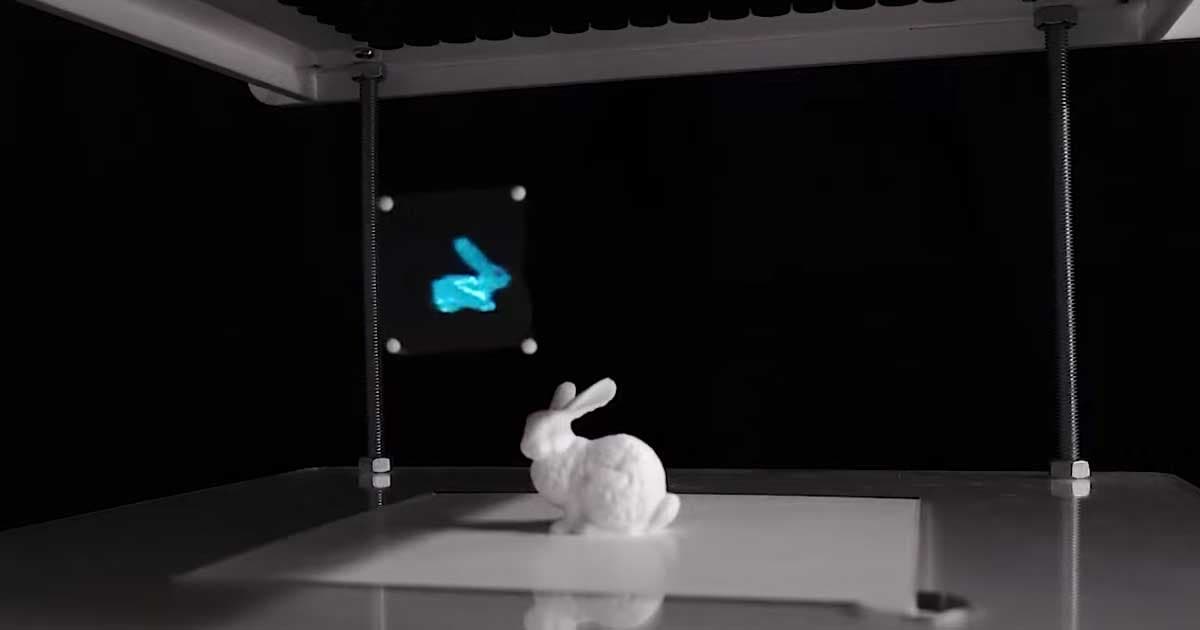 "No eye-wear or tricks required, simply 3D shapes sharing the very space in which we live."

"No eye-wear or tricks required, simply 3D shapes sharing the very space in which we live."

Researchers have come up with a new and improved way to levitate objects using sound waves alone, an impressive feat of mixed-reality technology that could pave the way for some seriously futuristic hologram-like displays.

As seen in a new video, the researchers were able to levitate individual polystyrene beads and water particles inside a special enclosure, making them move in three dimensions by adjusting the output of hundreds of small speakers, set up in a grid.

In one demonstration, they were even able to float a tiny piece of fabric in midair, on which they projected a movie of a leaping rabbit.

The team also addressed a fatal flaw with a previous iteration of their work. By increasing the number of speakers to 256 and adjusting each of their outputs using sophisticated software, the researchers were able to move the object despite the presence of interference.

An obstructing object inside the enclosure previously could cause individual sound waves to bounce around aimlessly, causing any levitating object to fall out of the air.

"In the past, our 3D displays had to exist in a vacuum, but now we can create 3D content right there in front of you," said Diego Martinez Plasencia, researcher at University College London and co-author of a new paper about the work published in the journal Science Advances, in a statement.

"No eye-wear or tricks required, simply 3D shapes sharing the very space in which we live," he added.

The resulting effect is quite astonishing. In one experiment, the team was able to levitate a water droplet over a moving glass of water, an object that would've otherwise proven to be a massive source of interference due to its reflective surface.

"It opens up the possibilities for fully immersive virtual reality experiences and interactive holograms," said Ryuji Hirayama, lead author from University College London, in the statement.

The team is now hoping to create a new system that allows for more than just one source of interference.

"I am excited for how this work opens the door for mixing many different materials in additive manufacturing and 3D printing," said lead researcher Sri Subramanian in the release. "Acoustic levitation has huge potential in precision manufacturing and this work paves the way for realising this opportunity."

Light Levitation
Researchers Found a Way to Levitate Objects Using Only Light
3. 19. 19
Read More
Brands We Love
Four Gravity-Defying Household Gadgets That Will Upend Your World
10. 28. 18
Read More
Japanese Scientists Unveil Touchable Holograms
12. 1. 15
Read More
+Social+Newsletter
TopicsAbout UsContact Us
Copyright ©, Camden Media Inc All Rights Reserved. See our User Agreement, Privacy Policy and Data Use Policy. The material on this site may not be reproduced, distributed, transmitted, cached or otherwise used, except with prior written permission of Futurism. Fonts by Typekit and Monotype.