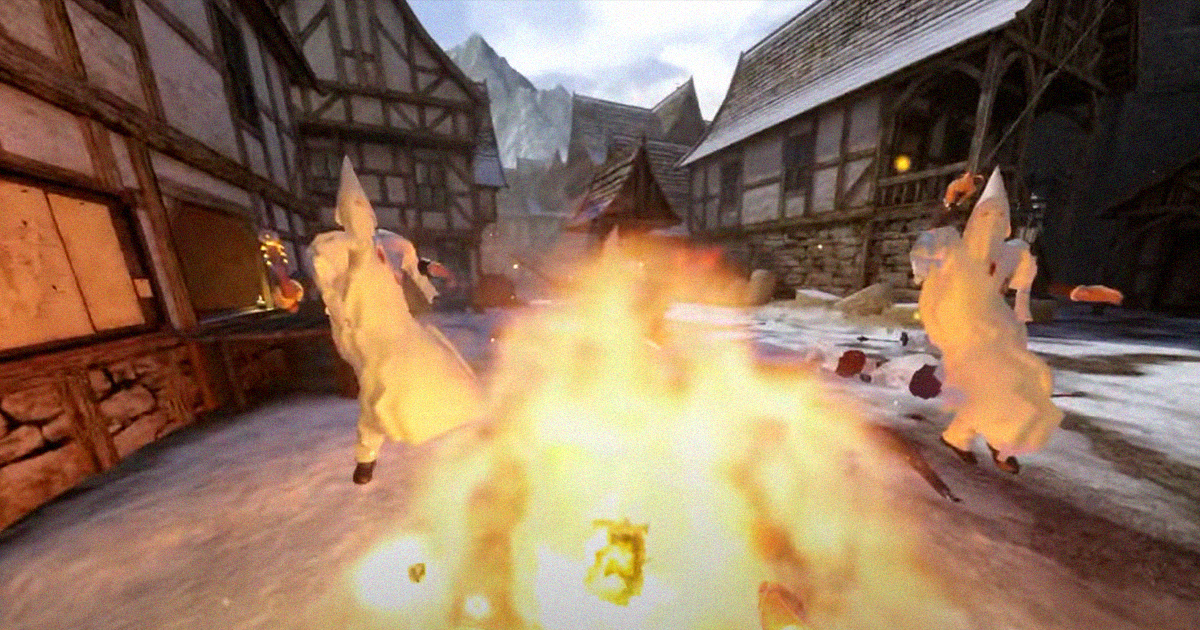 Now You Can Kill KKK Klansmen in Virtual Reality

"I have always wanted to do that!"

"I have always wanted to do that!"

Ever wanted to inflict vengeance against the Ku Klux Klan? Thanks to a new virtual reality mod, you can — in excruciatingly brutal detail.

"I have always wanted to do that!" exhorted modder JackTheFallout in a video of their private mod of the medieval fantasy VR game "Blade and Sorcery," which, as of now, is only available to those who can prove that they can handle its "controversial" nature.

It's not the first time a game has allowed players to kill Klansmen, given that both 2016's "Mafia III" and 2018's "Red Dead Redemption 2" allow players to wreak havoc on members of this particular racist organization.

That said, it does appear that JackTheFallout's mod is the first time gamers would be able to take on the Klan in VR — a concept which, as the gameplay video shows, is pretty gruesome.

Grisly as the gameplay may be, killing racists has a long history in video games. Perhaps the most famous example is 1992's prototypical first person shooter "Wolfenstein 3D, in which the bad guys are Nazis — a franchise that was still making headlines as recently as 2017's "Wolfenstein II: The New Colossus" due to on-the-nose political commentary.

Both JackTheFallout's video commentary and those made by Reddit users in a since-archived post reveal just how satisfying many find it to kill Klansmen in VR.

"This group of people is very fun to kill in video games," the modder says at the beginning of the video, and it appears their fans on Reddit agree.

"That rush you get when you feel you’re getting rid of some of the most intrinsically evil things in existence," one user noted, with others begging JackTheFallout to release the still-private mod to the public because it will make the world "a better place."

To their end, JackTheFallout said on the same archived Reddit post that their mod "is not available as of yet, and probably never will be."

Maybe they'll change their mind, though, and allow a hungry public the catharsis of killing Klansmen in VR.

Scammers Scam On
The Fyre Fest Guy Is Off House Arrest and of Course His New Scheme Involves the Metaverse and Crypto
11. 30. 22
Read More
Virtual Signing
Sign Language in Virtual Reality Actually Looks Kinda Awesome
11. 1. 22
Read More
Make Mark Happy
Facebook Employees Seem Completely Confused by the Metaverse
10. 11. 22
Read More
+Social+Newsletter
TopicsAbout UsContact Us
Copyright ©, Camden Media Inc All Rights Reserved. See our User Agreement, Privacy Policy and Data Use Policy. The material on this site may not be reproduced, distributed, transmitted, cached or otherwise used, except with prior written permission of Futurism. Articles may contain affiliate links which enable us to share in the revenue of any purchases made.
Fonts by Typekit and Monotype.