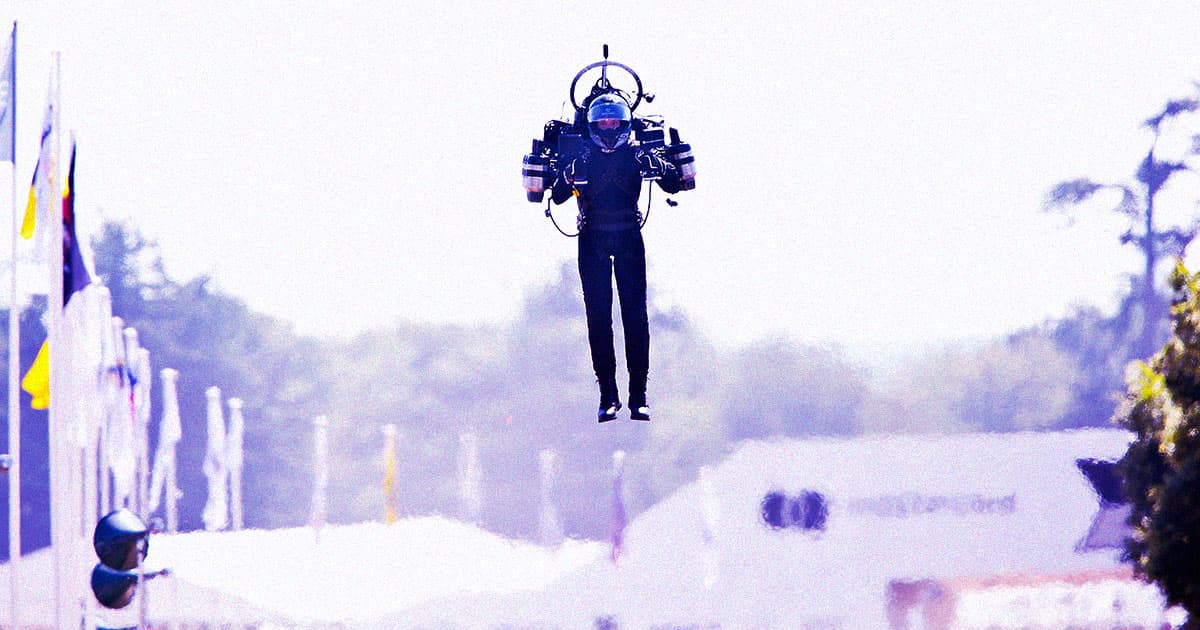 We were promised jetpack racing.

We were promised jetpack racing.

An aviation startup called JetPack Aviation is in talks to create a category of air racing specifically for jetpacks, New Atlas reports. What could possibly go wrong?

CEO David Mayman told the website that his company is working with the Air Race World Championship — the new name of the Red Bull Air Race competition, which folded in 2019 — to "create a parallel jetpack racing series" that would see motorsport drivers go head-to-head. Well, sort of.

"Some of the folks they're thinking about are young racers, people with motorcycle experience, Dakar [motorsports rally] experience, that sort of thing," the Mayman told New Atlas, adding that he's "been very clear that [JetPack Aviation will] get the ultimate say on who gets to fly."

If it comes to fruition, Mayman said the the race would feature a "series of pylons, rings and hoops" and would take place over water. Pilots, however, won't be sharing the same course due to safety concerns, but could race each other while completing parallel courses.

"The obstacles will be vertical as well as horizontal," he told New Atlas. "You'll have to go under this and over that, through this ring and around this pylon."

JetPack Aviation already allows "select participants" to test its jetpacks after just two days of training — as long as they can drop about $5,000 for the honor.

In his interview with New Atlas, Mayman admitted that if the Air Race deal goes through he'll have a lot of jetpacks to make and pilots to train.

"At the moment we're talking about launching around September, so we need to build another six machines and train about 30 new pilots, which we'll then whittle down to ten," he said. "It's going to be a mission!"

Though Mayman noted that JPA spends roughly 70 percent of its resources completing the three orders — one for a private consumer and two for Southeast Asian militaries — it's unclear if the company will be able to fulfill its promises. For one, we don't exactly how many jetpacks the company has already made or how long it takes to make them.

But we've got our fingers crossed.

Up, Up, and Away!
They Let Me Fly an Experimental Jetpack and... Well, I Survived
8. 15. 22
Read More
Boeing is Sponsoring a $2 Million Competition to Bring Us Real Jet Packs
10. 2. 17
Read More
Dishonorable Discharge
Scientists Alarmed by Video of Deep Sea Mining Company Spewing Waste Into Ocean
Yesterday
Read More
+Social+Newsletter
TopicsAbout UsContact Us
Copyright ©, Camden Media Inc All Rights Reserved. See our User Agreement, Privacy Policy and Data Use Policy. The material on this site may not be reproduced, distributed, transmitted, cached or otherwise used, except with prior written permission of Futurism. Articles may contain affiliate links which enable us to share in the revenue of any purchases made.
Fonts by Typekit and Monotype.