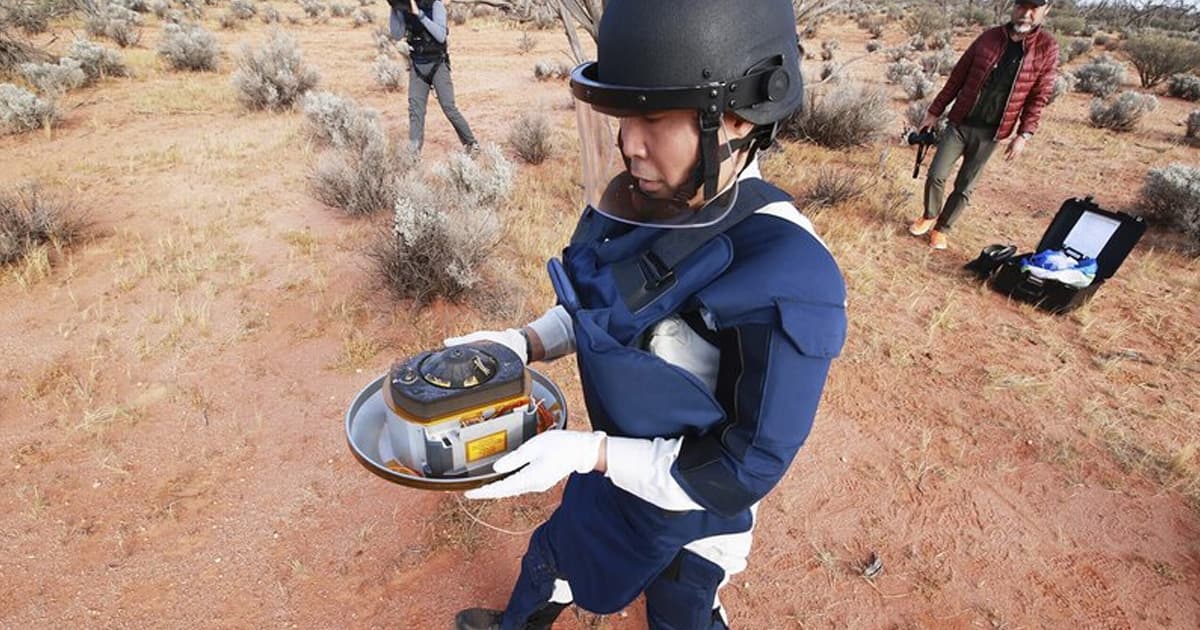 Your Asteroid Uber is Here

"We collected the treasure box. The capsule collection was perfectly done."

"We collected the treasure box. The capsule collection was perfectly done."

After spending more than a year studying Ryugu, an asteroid some 180 million miles away, Japan's space agency's Hayabusa-2 spacecraft has returned samples from the space rock back to Earth.

The Hayabusa2 capsule that landed in Woomera, Australia yesterday, will be shipped to Japan by transport aircraft today (12/7) from Woomera Airport at 22:30JST (24:00 local ). Arrival at Haneda Airport is scheduled for 6:45 JST on 12/8. Finally, the capsule will be back in Japan!

A toaster-sized capsule released by the robot spacecraft landed in Woomera, South Australia in the early morning hours on Sunday, with about 0.1 grams of asteroid samples on board.

"Hayabusa-2 is home," Yuichi Tsuda, project manager for the mission, said at a press conference, as quoted by the BBC. "We collected the treasure box. The capsule collection was perfectly done."

"This morning [December 7], the recovery team confirmed that the sample container was properly sealed and completed the gas sampling work," the Japanese mission's official Twitter account wrote. "We analyzed the collected gas, but it is still unknown whether the gas originates from the Ryugu sample. Detailed analysis will continue in Japan!"

The event marks only the second time we've ever successfully returned asteroid samples. The first was when Hayabusa-2's predecessor, Hayabusa, dropped off samples from asteroid 35143 Itokawa in June 2010.

Scientists are hoping to glean insights into the evolution of planets and how life may have ended up on Earth by studying asteroid samples that — unlike meteorites — haven't been affected by the extremely hot temperatures of reentry through the atmosphere.

Astonishingly, Hayabusa-2's mission is far from over. The small spacecraft is now on the way to 2001 CC21, an asteroid about the size of San Francisco Bay, for a 2026 flyby.

More on the mission: Japanese Space Probe Returning to Earth, With Chunks of Asteroid

Rock Is Dead
NASA Spacecraft Grabbed Too Many Asteroid Chunks and Now They're Drifting Into Space
10. 26. 20
Read More
Asteroid Armageddon
The "Space Nation" Warns That an Asteroid Could Wipe out Humanity
4. 8. 19
Read More
Particle Plume
NASA Shocked by "Plumes Erupting From an Asteroid’s Surface"
3. 19. 19
Read More
+Social+Newsletter
TopicsAbout UsContact Us
Copyright ©, Camden Media Inc All Rights Reserved. See our User Agreement, Privacy Policy and Data Use Policy. The material on this site may not be reproduced, distributed, transmitted, cached or otherwise used, except with prior written permission of Futurism. Articles may contain affiliate links which enable us to share in the revenue of any purchases made.
Fonts by Typekit and Monotype.