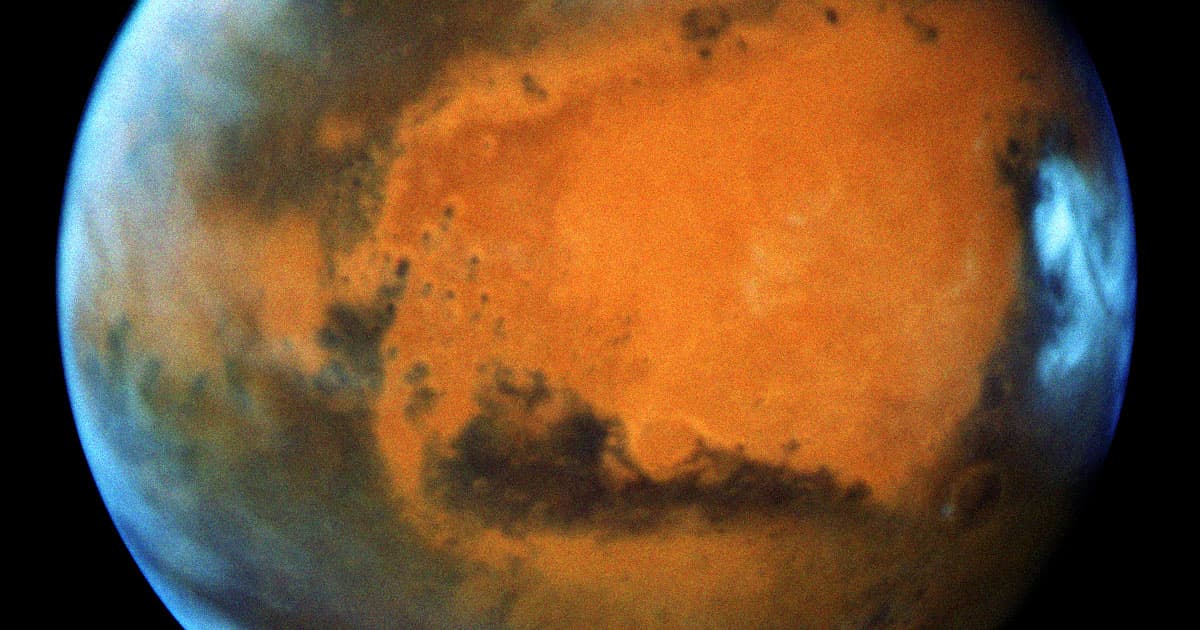 "We weren't expecting that."

"We weren't expecting that."

The James Webb Space Telescope has captured its first images of Mars, providing crisp new observations of a damaged planet.

Using the scope's Near-Infrared Camera (NIRCam), astronomers got a new look at the Hellas Basin, believed to have formed some four billion years ago when an unknown object of gargantuan proportions smashed into Mars’ surface when the poor planet was still young. At 4,400 miles across, it shows up in NIRCam’s images as a massive dark-orange spot in the infrared spectrum, amidst the bright yellow of Mars’ subsolar point, the point where the sun is directly overhead.

What's notably strange is the Hellas Basin’s darkness, especially when you consider that the sun is beaming directly down on it — something that caught even NASA scientists off guard.

"We weren't expecting that," said lead investigator and Goddard Space Flight Center scientist Giuliano Liuzzi at a press conference, as quoted by Space.com. "We were seeing something very bright, but it got darker."

The explanation, according to principal investigator Geronimo Villanueva also of Goddard, lies lies in the planet's atmosphere.

"The Hellas Basin is a lower altitude, and thus experiences higher air pressure," Villanueva explained in a NASA statement. "That higher pressure leads to a suppression of the thermal emission at this particular wavelength range due to an effect called pressure broadening. It will be very interesting to tease apart these competing effects in these data."

You’d think it’d be a no-brainer to point the groundbreaking space telescope, capable of capturing celestial bodies billions of lightyears away, at a planet in our own solar system.

But it’s trickier than it sounds. Because the James Webb is so powerful, something as close as Mars is astonishingly bright and overwhelming to its sensors.

To overcome that challenge, NASA astronomers used short exposures so that the images didn’t appear blown out, and used special techniques to analyze the resulting data.

Clearly, the scientist' finagling paid off — and we can't wait to see more.

More on the James Webb: Harvard and MIT Scientists Warn That James Webb Data May Not Be What It Seems

A Sip of Opal
NASA Discovers Precious Gemstones on Mars
Jan 9
Read More
Martian Oases
Scientist Proposes Growing a Forest Inside a Bubble on Mars
12. 3. 22
Read More
Psychological Warfare
Experts Excoriate NASA Report Claiming James Webb Wasn't Homophobic
11. 19. 22
Read More
+Social+Newsletter
TopicsAbout UsContact Us
Copyright ©, Camden Media Inc All Rights Reserved. See our User Agreement, Privacy Policy and Data Use Policy. The material on this site may not be reproduced, distributed, transmitted, cached or otherwise used, except with prior written permission of Futurism. Articles may contain affiliate links which enable us to share in the revenue of any purchases made.
Fonts by Typekit and Monotype.