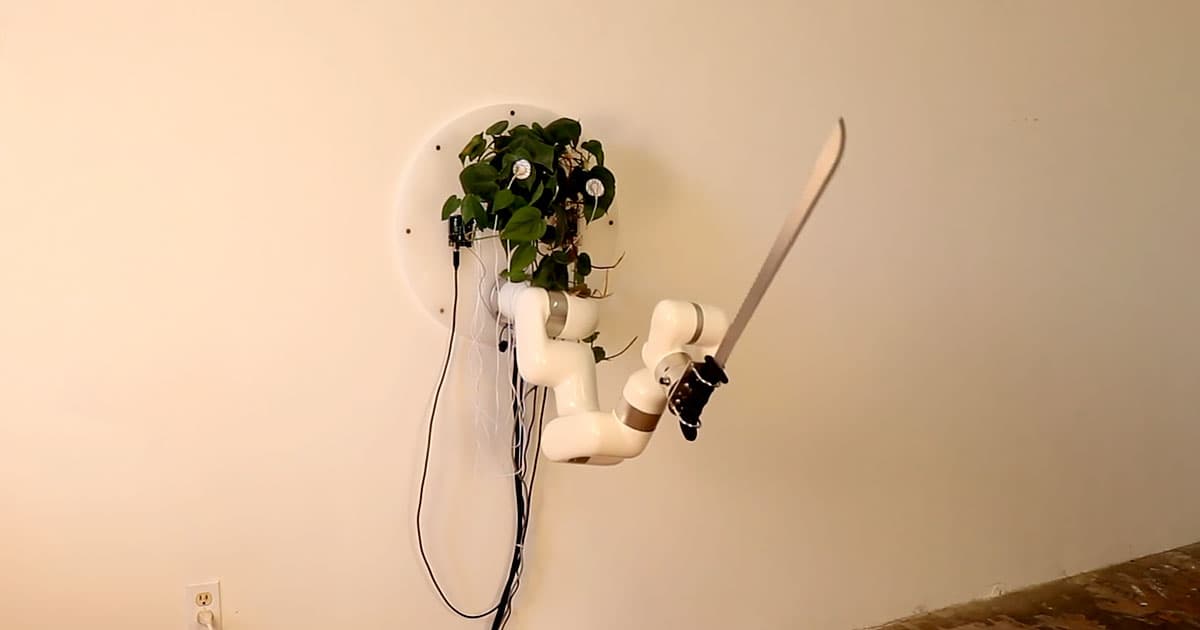 What if you gave a plant control of a robotic arm... and then gave that robotic arm a machete?

That's the pressing question explored by robotics artist David Bowen, the creator of an installation called "Plant Machete," which does exactly that.

"Essentially," Bowen's website reads, "the plant is the brain of the robot controlling the machete determining how it swings, jabs, slices and interacts in space."

The live philodendron used in the installation directs the arm via open-source microcontroller, which receives input from the plant's electric signals.

As the artist-provided video of the plant-controlled robotic arm shows, the sensors used in this symbiotic hookup look much like the circular EEG applicators put on hospital patients to read their vital signs — which, given how the plant's machete-controlling mechanism is described, seems to be a pretty apt comparison.

Needless to say, there's no evidence that the philodendron is directing its swordplay in any meaningful way. In reality, signals from the plant are probably acting more as a random number generator to steer the robotic arm.

While this is certainly a novel approach, it's far from the first time we've seen "cyborg botany" in action. In 2018, a Chinese roboticist built a spider-esque machine that could move a plant around to find the best sun, and later that year, researchers at MIT built a cyborg houseplant that could cart itself around on two wheels using similar tech.

The concept of arming plants via robots, however, is decidedly fresh — and given how much we're hurting the planet in our endless pursuit of advancement, it's certainly a fun twist.

More cyborgism: Inventor of Cyber Cockroach Says it Will Only Be Used for Good

Diner Drama
People Furious at Robot Serving Pancakes at Denny's
11. 28. 21
Read More
Killer Robot Update
Uh Oh, They Strapped a Sniper Rifle to a Robot Dog
10. 12. 21
Read More
Cyborg Jellies
Scientists Want to Explore Ocean With "Cyborg Jellyfish"
1. 29. 20
Read More
+Social+Newsletter
TopicsAbout UsContact Us
Copyright ©, Camden Media Inc All Rights Reserved. See our User Agreement, Privacy Policy and Data Use Policy. The material on this site may not be reproduced, distributed, transmitted, cached or otherwise used, except with prior written permission of Futurism. Articles may contain affiliate links which enable us to share in the revenue of any purchases made.
Fonts by Typekit and Monotype.