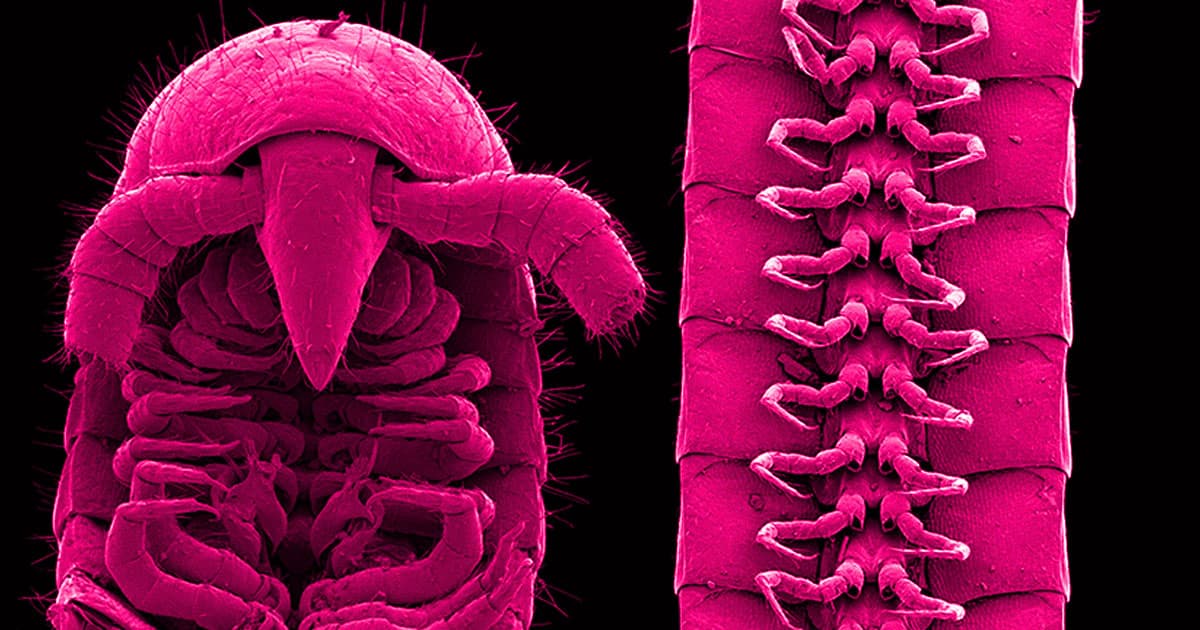 Like her namesake, E. persephone lives deep within the the underworld.

Like her namesake, E. persephone lives deep within the the underworld.

Until now, a "true" millipede had never been found. But a newly-discovered critter not only meets the proper criteria, but also looks like it originated from the bowels of hell.

A study published in the journal Scientific Reports introduces the world to Eumillipes persephone, an eyeless wonder who boasts a whopping 1,306 legs — making it the first real 1,000-plus-legged "millipede" in the world.

Discovered deep underground in Australia by Virginia Tech researchers, E. persephone's name references the Greek myth of Persephone, Hades' consort and queen of the underworld, and it's not hard to guess why.

The study's authors continued that flair for the dramatic when announcing the new millipede, boasting that "here we report the discovery of E. persephone, the first super-elongated millipede known from Australia, and the new world record holder of the animal with the greatest number of legs."

All hail the world’s first true millipede! Eumillipes persephone is the first known millipede to live up to its name in having a thousand legs - in fact, it’s packing 1,306. Before now, the most legs found on a millipede was 750.

In spite of likely being a distant relative of Illacme plenipes, the 750-legged menace who was the previous record holder for the creature with the most number of legs on Earth, E. persephone is different from previous "super-elongated" millipedes due to its sheer length, with females reaching an extraordinary 95.7 millimeters in length, more than double I. plenipes' top length.

As ScienceAlert noted in its report on the study, there's still a lot that's not known about E. persephone, including what it eats. But the unknowns surrounding this extremely sketchy-looking creepy crawler present exciting questions for researchers, too, especially when it comes to the biodiversity of its first known habitat, Australia's Eastern Goldfields Province.

"These underground habitats, and their inhabitants, are critically understudied, despite their ecological importance in filtration of groundwater and screening of environmental toxins," the study's authors wrote.

There's even the possibility, ScienceAlert wrote, that the discovery of this mythologically-inspired millipede will serve as a basis for laws protecting its habitat.

E. persephone is, so far, as mysterious (and creepy) as the goddess for whom she was named — and her "hellish" existence brings to mind another near-myth, this one from Hamlet: "There are more things in heaven and Earth... than are dreamt of in your philosophy."

More on heaven and earth: Scientists Create Creature That Doesn't Need to Breathe

Horrible Geese
Furious Geese Are Defeating Humans, Scientists Find
Dec 4
Read More
Quacks Like a Duck
Those Headlines About Scientists Building a Wormhole Are Total Nonsense, People
Dec 1
Read More
Falling In
Objects We Thought Were Black Holes May Actually Be Wormholes, Scientists Say
Nov 15
Read More
+Social+Newsletter
TopicsAbout UsContact Us
Copyright ©, Camden Media Inc All Rights Reserved. See our User Agreement, Privacy Policy and Data Use Policy. The material on this site may not be reproduced, distributed, transmitted, cached or otherwise used, except with prior written permission of Futurism. Articles may contain affiliate links which enable us to share in the revenue of any purchases made.
Fonts by Typekit and Monotype.