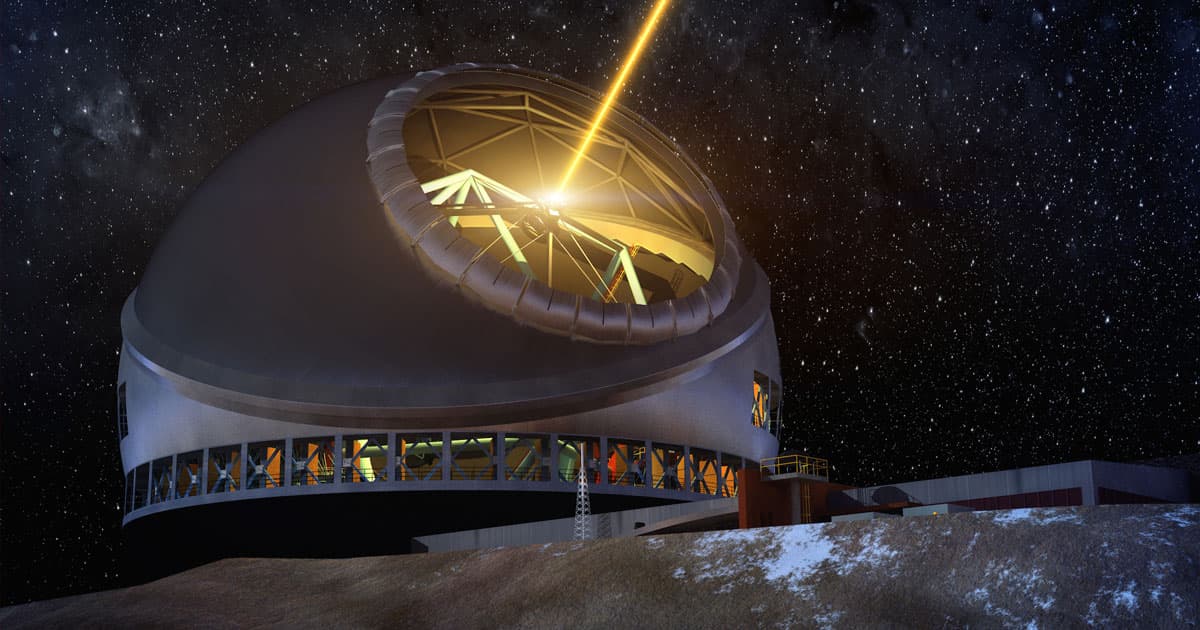 The Thirty Meter Telescope would be built on a culturally-significant summit.

The Thirty Meter Telescope would be built on a culturally-significant summit.

Hundreds of Hawaiian protesters blocked construction vehicles from commencing work on the Thirty Meter Telescope, an observatory expected to be built on the summit of Mauna Kea, a culturally-significant volcanic peak.

The Hawaiian Supreme Court approved the plan in an October ruling and the observatory has all its permits in order, per NBC. But activist leaders at Monday's protest told the Associated Press they're prepared for a "prolonged struggle" against the project. It's a harrowing reminder that scientific progress and cultural values can sometimes stand in stark opposition to each other.

The Thirty Meter Telescope would be the largest visible-light telescope in the world and would be used in the hunt for more exoplanets. Mauna Kea's peak would provide a clear view of space with little obstruction from clouds or light pollution, according to the AP. The view is so good that roughly a dozen other telescopes are already there.

"Located above approximately 40 percent of Earth's atmosphere, [Mauna Kea] has a climate that is particularly stable, dry, and cold; all of which are important characteristics for capturing the sharpest images and producing the best science," reads a TMT International Observatory statement reviewed by NPR.

The nonviolent protesters blocked construction vehicles from reaching the site for the planned groundbreaking in order to protect the volcano's religious altars and burial grounds, according to NPR.

"It was a test of our fortitude," activist Walter Ritte told the AP. "This mountain is like our last stand."

More on the observatory: The Latest Super Telescopes Will Let You See Space Like Never Before

Bad Science
Cosmologist Lists the Stupidest Things People Believe About Space
Feb 25
Read More
Turn Off That Dang Light
SpaceX's Starlink Satellites Ruined This Photo of the NEOWISE Comet
7. 23. 20
Read More
Space Swag
Brands Keep Sending Their Pointless Swag to the Space Station
11. 5. 19
Read More
+Social+Newsletter
TopicsAbout UsContact Us
Copyright ©, Camden Media Inc All Rights Reserved. See our User Agreement, Privacy Policy and Data Use Policy. The material on this site may not be reproduced, distributed, transmitted, cached or otherwise used, except with prior written permission of Futurism. Fonts by Typekit and Monotype.