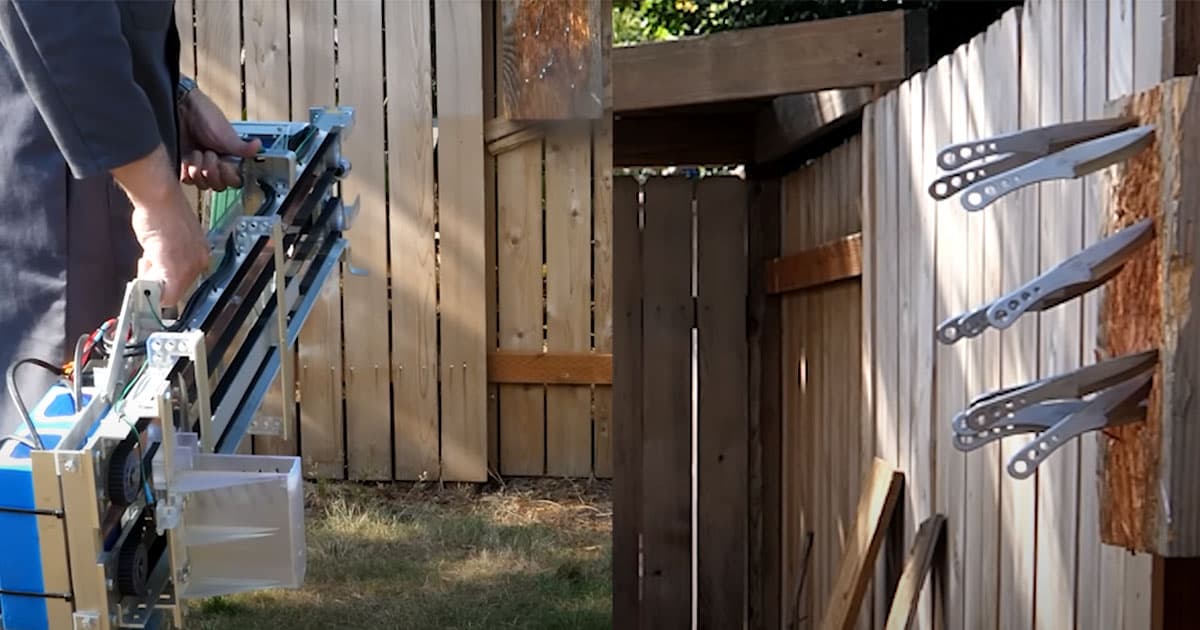 We're Obsessed With This Laser-Sighted Gun That Shoots Knives

This is seriously impressive — and absolutely terrifying.

This is seriously impressive — and absolutely terrifying.

The father-and-son duo behind the YouTube channel Quint Builds came up with a weapon that's equal parts terrifying and awe-inspiring.

In a recent video, the pair collaborated on a laser-sighted, fully automatic, knife-throwing machine gun — and we're having a hard time deciding whether we should be impressed or run the other way.

The construction of the knife gun was a long and arduous process, fraught with trial and error. The duo rigged up four servo motors attached to two belts to form two parallel knife-slinging mechanisms.

By running a 3D-printed, knife-wielding sled between the two belts and timing the top belt to move slightly faster, the team was able to both spin and launch the knives at just the right angle.

A clever electromagnetic system allowed for the knife to be released at just the right moment, spinning it around its own axis roughly 360 degrees to impale targets with a satisfying thud.

A LIDAR-powered knife reloading system is the cherry on top, allowing multiple knives to be shot at a target in quick succession.

"It's accurate enough I have to spread [the knives] out on the target so [they] don't hit each other," said Quint senior in the video.

So there we have it: a handheld death machine that could be the ultimate survival tool in a zombie apocalypse — or at least a great way to entertain friends.

We'll let you decide on that one.

Robot Violence
YouTube Accidentally Removed Robot Battle Videos for "Animal Cruelty"
8. 20. 19
Read More
Suicide Drone
The Maker of AK-47 Rifles Just Unveiled a "Suicide Drone"
2. 25. 19
Read More
The U.S. Is Turning to Lasers for the Future of Warfare
5. 4. 17
Read More
+Social+Newsletter
TopicsAbout UsContact Us
Copyright ©, Camden Media Inc All Rights Reserved. See our User Agreement, Privacy Policy and Data Use Policy. The material on this site may not be reproduced, distributed, transmitted, cached or otherwise used, except with prior written permission of Futurism. Articles may contain affiliate links which enable us to share in the revenue of any purchases made.
Fonts by Typekit and Monotype.