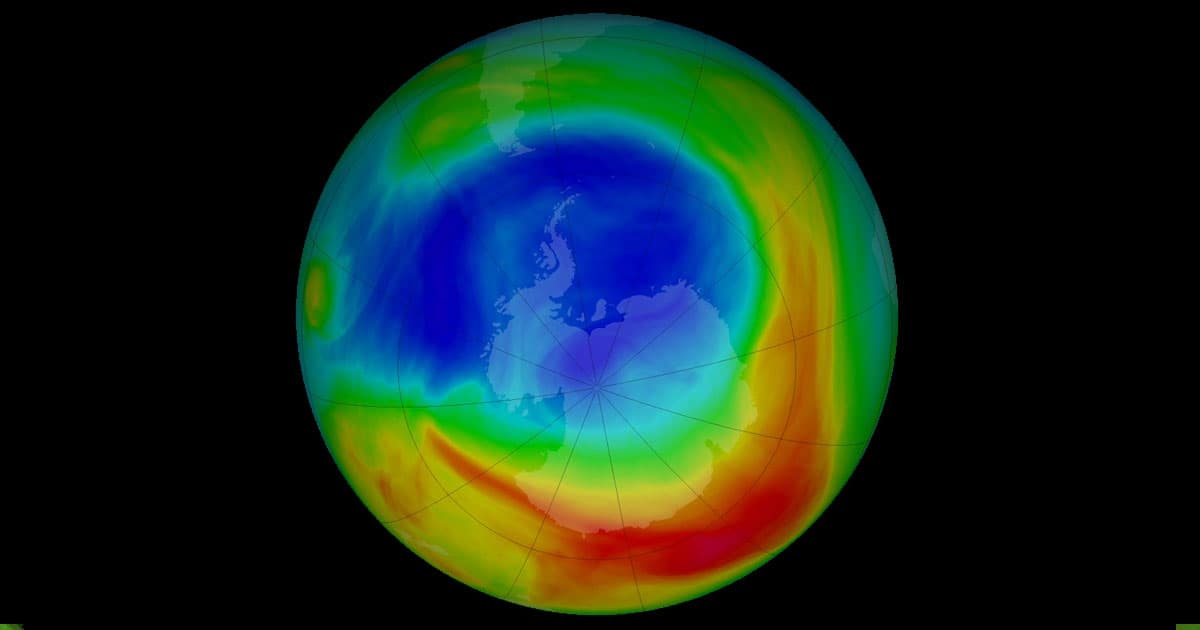 Good News: The Ozone Hole Is Smaller Than We’ve Ever Seen It

But human efforts to heal the hole had nothing to do with it.

But human efforts to heal the hole had nothing to do with it.

The hole in Earth’s ozone layer — a part of the stratosphere that shields the planet from harmful ultraviolet radiation — is the smallest it’s been since scientists first began observing it in 1982, NASA and the National Oceanic and Atmospheric Administration have announced in a joint statement.

However, human efforts to heal the hole seemingly had nothing to do with the welcome development.

The hole’s size fluctuates over time. According to satellite measurements, it typically reaches a size of about 20 million square kilometers (8 million square miles) in late September or early October.

In 1989, the Montreal Protocol — an international treaty banning the use of ozone-depleting chemicals — went into effect, and researchers expect the ozone to completely heal as a result of that agreement by 2070.

However, this year’s measurements of the ozone hole seem to have less to do with human efforts and more to do with unusually warm stratospheric temperatures, which the researchers could not link to climate change.

“It’s a rare event that we’re still trying to understand,” atmospheric scientist Susan Strahan said in a NASA news release. “If the warming hadn’t happened, we’d likely be looking at a much more typical ozone hole.”

READ MORE: The Antarctic ozone hole is the smallest since it was discovered [CNN]

More on the ozone: Our Efforts to Heal the Ozone Layer Are Finally Paying Off

Hallelujah
Our Efforts to Heal the Ozone Layer Are Finally Paying Off
11. 6. 18
Read More
Some of the Ozone Layer Is Still Thinning, Thanks to a Surprise Chemical
2. 20. 18
Read More
We Now Have Direct Proof That Human Activity Can Heal the Ozone Hole
1. 9. 18
Read More
+Social+Newsletter
TopicsAbout UsContact Us
Copyright ©, Camden Media Inc All Rights Reserved. See our User Agreement, Privacy Policy and Data Use Policy. The material on this site may not be reproduced, distributed, transmitted, cached or otherwise used, except with prior written permission of Futurism. Fonts by Typekit and Monotype.