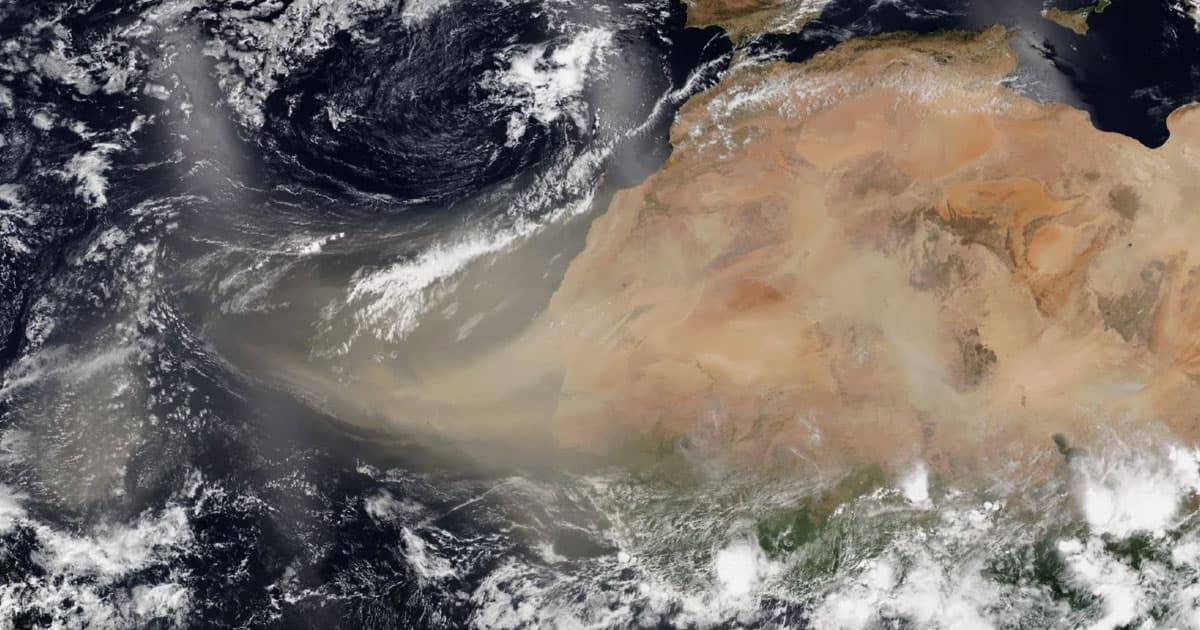 So Dusty in Here

It's so large, it can easily be seen from space.

It's so large, it can easily be seen from space.

After wreaking havoc on air quality readings in the Caribbean, dust from the Sahara Desert just arrived at the US gulf coast, forming what experts referred to as a “Godzilla dust cloud.” It’s so large, it can be easily seen and tracked from space.

“This is the most significant event in the past 50 years,” Pablo Méndez Lázaro, an environmental health specialist with the University of Puerto Rico, told AP earlier this week. “Conditions are dangerous in many Caribbean islands.”

“The ongoing Saharan #dust outbreak across the tropical Atlantic is *by far* the most extreme” since records of global dust began in 2002, atmospheric scientist Michael Lowry tweeted on Wednesday.

Dust from the Sahara makes its way across the Atlantic on a yearly basis, but rarely on this scale. The phenomenon is called the “Saharan Air Layer,” and it “typically ramps up in mid-June and peaks from late June to mid-August,” according to a recent writeup by the National Oceanic and Atmospheric Administration.

“This layer can travel and impact locations thousands of miles away from its African origins,” the NOAA wrote. It also “plays an important ecological role, such as fertilizing soils in the Amazon and building beaches in the Caribbean.”

“Typically, you lose the blue sky for more hazy, milky sky,” Marshall Shepherd, director of the Atmospheric Sciences Program at the University of Georgia, told NPR.

Other negative effects from the dust can include the worsening of allergies. According to NPR, the dust may even complicate matters for COVID-19 patients, who are already experiencing respiratory ailments.

A Tunisian Energy Company Wants to Pipe Electricity from the Sahara to Europe
9. 8. 17
Read More
Stranger Than Fiction
Great, NASA Says an Underwater Shark Volcano Has Erupted
Yesterday
Read More
Hard Feelings
Fossil Fuel Consultant Quits In Disgust, Tired of Destroying Environment
Yesterday
Read More
+Social+Newsletter
TopicsAbout UsContact Us
Copyright ©, Camden Media Inc All Rights Reserved. See our User Agreement, Privacy Policy and Data Use Policy. The material on this site may not be reproduced, distributed, transmitted, cached or otherwise used, except with prior written permission of Futurism. Fonts by Typekit and Monotype.