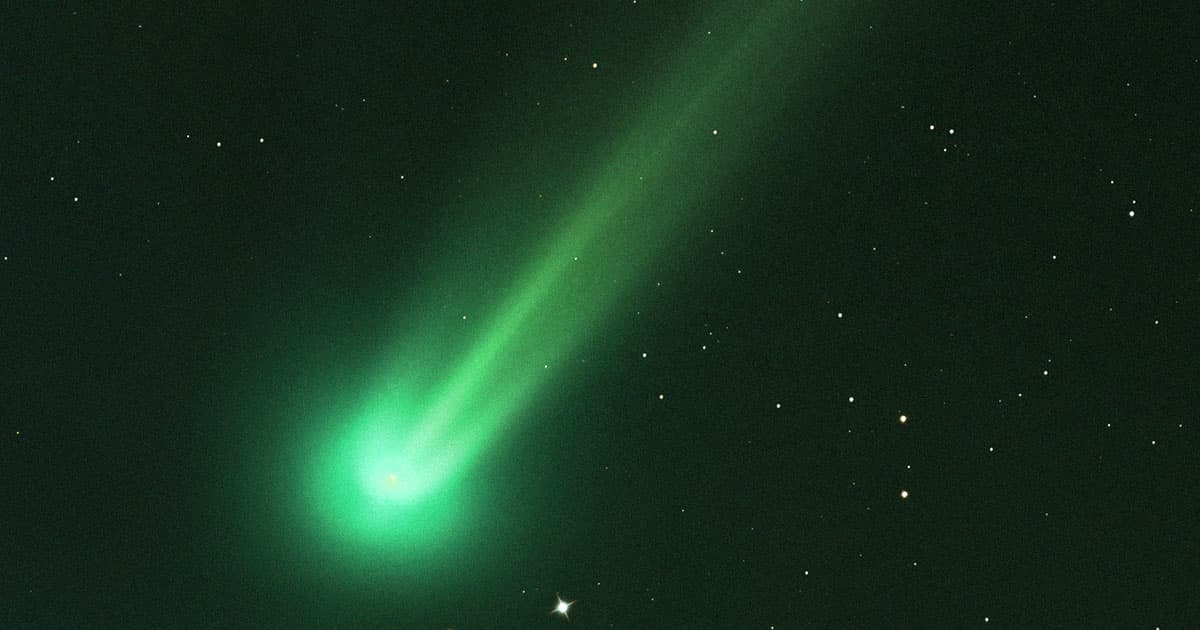 If You Go Outside, You May Be Able to See an Awesome Green Comet

If it's a clear night in the Northern Hemisphere, there's a decent chance you'll be able to spot a giant, green comet passing by our planet from your backyard.

It's an exceedingly rare event. According to astronomers, it won't stop by again for roughly another 50,000 years — and now is the best time to see it on its current visit, as Insider reports.

According to NASA, the comet — with the catchy name C/2022 E3 (ZTF) — was first spotted in March last year. Ever since, it's been screaming through the solar system, making its closest approach to the Sun last week. It will be closest to Earth on February 2.

But you may get a good chance to spot it before then as well. According to Space.com, the Moon will provide the perfect lighting to illuminate ZTF on January 21, depending on local weather conditions of course.

Experts have suggested its green color is the result of sunlight decaying dicarbon found in the comet, a common reactive molecule.

There's a chance, NASA says, that the comet could be close enough to be "visible to the unaided eye under dark skies." And if you have a pair of binoculars handy, it should be "easy to spot."

According to EarthSky, the comet has already been spotted in the night sky without any optical aid — but if you want the best chance, you should gaze at the night sky during the last few days of January and the first few days of February if you happen to live in the northern hemisphere.

According to the Adler Planetarium, ZTF will be the brightest around January 31 and February 1.

EarthSky has a handy and detailed breakdown of where exactly the comet can be spotted on what date.

If you live in the southern hemisphere, though, you'll have to wait until early February.

While it isn't the brightest object in the night sky, its brightness is increasing over time, EarthSky reports. Experts predict it will get as bright as magnitude 5.0, which is only about as bright as the dimmest stars you can spot from a perfectly dark location.

Then there's the fact that comets are "notoriously unpredictable," as NASA points out, which means you should probably have a look for yourself before ZTF disappears from our skies once and for all.

READ MORE: Now's the best time to see the green comet passing Earth for the first time since the Ice Age. Here's how, where, and when to see it. [Insider]

More on the comet: A Super Rare Green Comet Is About to Pass By the Earth