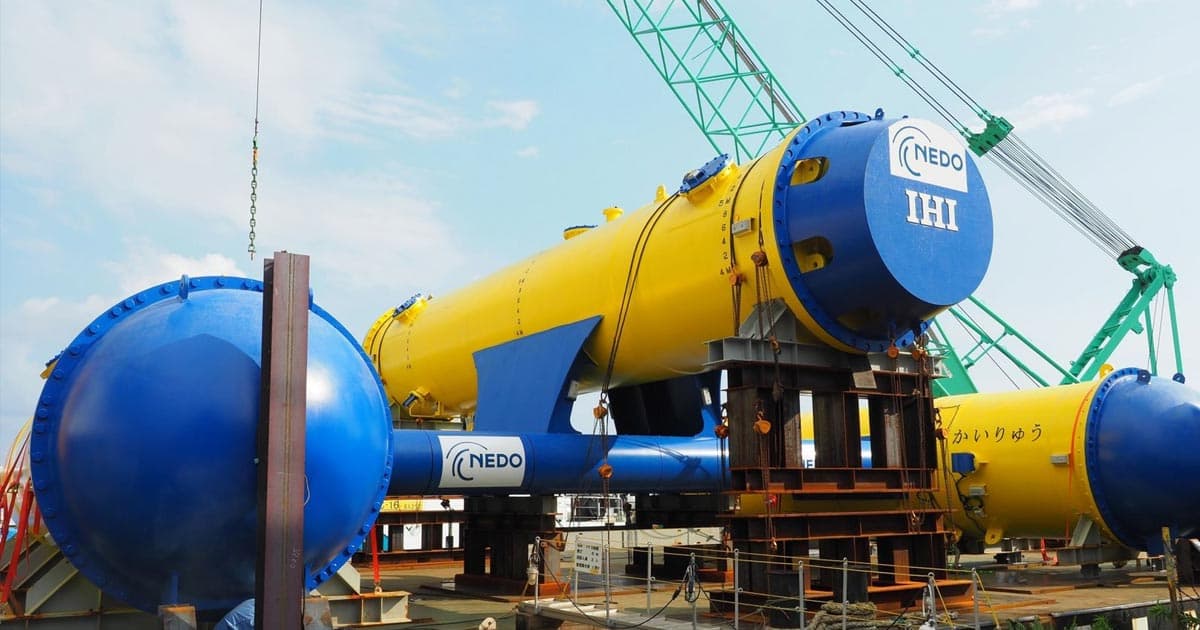 And the test went great.

And the test went great.

In the wake of the devastating nuclear meltdown at Japan's Fukushima nuclear plant in 2011, officials have been hunting for new sources of green energy — and they're leaving no stone unturned.

A heavy machinery maker in Japan called IHI Corp has successfully tested a prototype of a massive, airplane-sized turbine that can generate electricity from powerful deep sea ocean currents, Bloomberg reports, laying the groundwork for a promising new source of renewable energy that doesn't rely on sunny days or strong winds.

The company's latest prototype is called Kairyu and weighs in at 330 tons. Two counter-rotating turbine fans are connected by a massive fuselage, which allows the entire apparatus to float while anchored anchored to the sea floor, hovering between 100 and 160 feet below the surface.

There, it pulls energy from one of the world's strongest ocean currents, off the eastern coast of Japan, using it to spin its mighty turbines.

During demonstrations earlier this year, the company was able to generate around 100 kilowatts of stable power. During future tests, IHI Corp is hoping to generate two megawatts, with the hopes of kicking off commercial operations in the 2030s, Bloomberg reports.

Japan is also exploring other ways to generate energy from the sea, including tidal power and ocean thermal energy conversion, the latter of which generates electricity by exploiting the temperature differential between cold and warm ocean water.

Engineers now have the challenge of scaling the operation to a point where it makes economical sense, which is not an easy feat.

"The biggest issue for ocean current turbines is whether they could produce a device that would generate power economically out of currents that are not particularly strong," Angus McCrone, marine energy analyst, told Bloomberg.