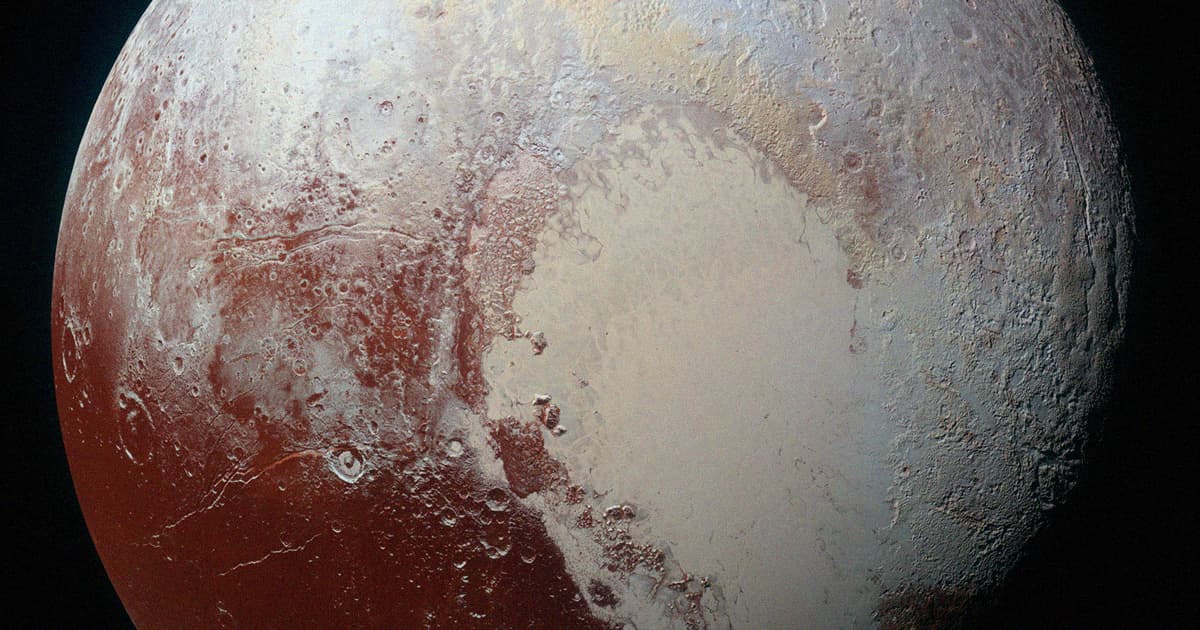 We still don't know why they exist.

We still don't know why they exist.

A team of researchers from the Netherlands have recreated the conditions observed in Pluto's atmosphere in a laboratory chamber, and then shot it with plasma to simulate space radiation.

Their goal was to investigate a strange phenomenon on the surface of the dwarf planet, first spotted by NASA's New Horizons spacecraft back in 2015, New Scientist reports: huge reddish patches that dot the planet's surface. The largest, which has been ominously dubbed the Cthulhu Macula, is a drawn out dark region near the dwarf planet's equator.

Scientists' best guess is that the reddish spots are the result of tholins, organic compounds created in the atmosphere when ultraviolet or cosmic radiation heats up carbon, methane, and carbon dioxide-containing compounds, which then precipitate onto the planet's surface. The theory goes that the radiation causes these compounds to turn a dark and muddy red, creating the blobs observed by New Horizons.

In their tests, however, the team from the Delft University of Technology discovered that it was impossible to recreate the reddish hues of the Cthulhu Macula region using the chemical composition observed by New Horizons — showing that there's still much we don't know about the distant dwarf planet, even nearly a hundred years after its discovery.

The team didn't rule out the theory that tholins could be the culprit for the red spots, as detailed in their paper, which was published in the journal Icarus — but something else may also be contributing to their formation as well, as Science Alert explained.

Cosmic rays could for instance be changing the way tholins reflect light or the planet's regions could be more porous due to the sublimation of ice. Pluto's weak gravity could also be causing the tholins to create a light layer of tholins, resulting in a porous crust, which is the team's "preferred scenario," according to the paper.

But plenty of questions remain about Pluto's giant red spots. While scientists have floated the idea of a return mission to Pluto, NASA isn't formally planning to return to the dwarf planet any time soon.

READ MORE: Pluto is covered in huge red patches and we don't know what they are [Science Alert]