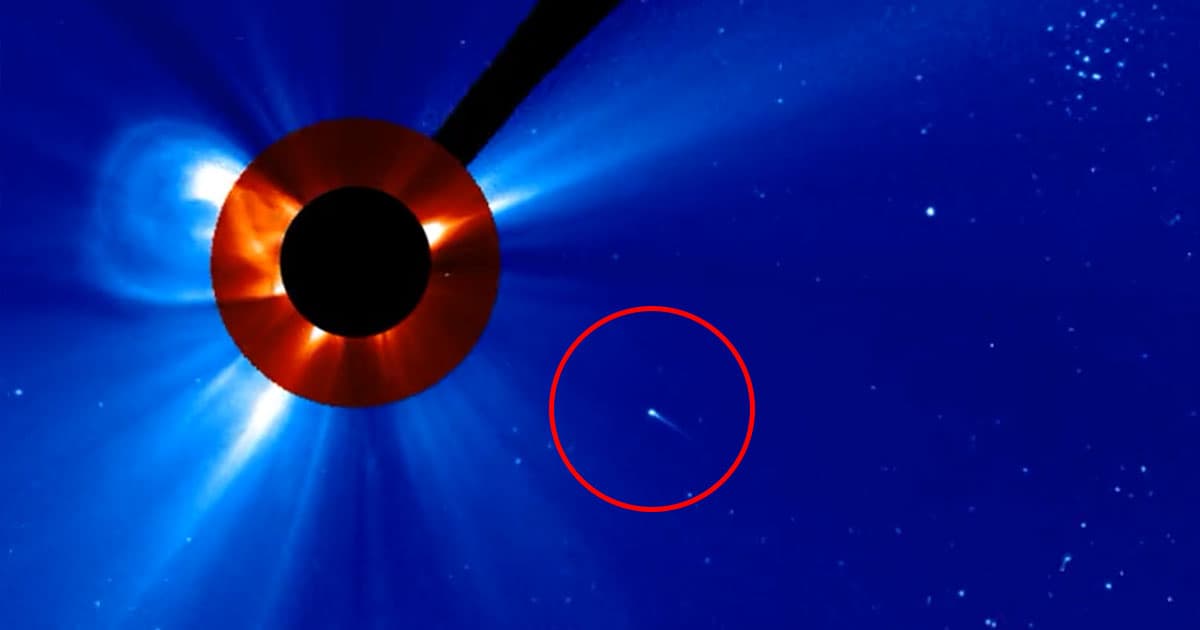 Talk about a snowball's chance in hell!

Talk about a snowball's chance in hell!

Rest in pieces. On Sunday morning, a massive chunk of comet was spotted crashing into our fiery Sun — and unsurprisingly, video of the incident looks catastrophic for the ill-fated snowball.

According to SpaceWeather.com, the Sun-diving incident was captured on camera by NASA's Solar and Heliospheric Observatory. In the clip, the cosmic snowball is seen charging towards the colossal star — but sadly, it's fair to say the comet disintegrated inside the ultra-hot star.

"The doomed comet was almost certainly a 'Kreutz sungrazer,' a fragment from a giant comet that broke apart many centuries ago," astronomer Tony Phillips wrote for SpaceWeather."A swarm of these fragments orbits the sun, and every day at least one gets too close and disintegrates."

THE COMET DID NOT SURVIVE: As with most sun-diving comets, this one did not come out the other side of the Sun after its nearest approach to the Sun (perihelion). 🙁 pic.twitter.com/ok5fHbfdDv

Our Sun's intense gravitational pull is the likely cause of this comet's death dive. Like Earth, comets orbit the Sun — but if they get too close to the star? The gravitational pull can become too strong to resist, leading comets like our ill-fated friend here to get swallowed whole.

As Phillips wrote for SpaceWeather, this actually happens all the time — although this particular comet was a bit bigger than your usual Sun-diving space snowball, so it grabbed a bit more attention. In any case: So long, good sir.

More on comets diving into their fiery doom: Unfortunate Comet Flies Too Close to the Sun, Disintegrates and Becomes a Ghost

Sun Gazer
Researchers Want to Use the Sun As a Giant Telescope to Look for Aliens
7. 25. 22
Read More
Solar Flyby
Here's the Closest Picture We've Ever Taken of the Sun
12. 13. 18
Read More
Watch This Breathtaking, Close-Up Clip Of The Surface of A Distant Comet
4. 25. 18
Read More
+Social+Newsletter
TopicsAbout UsContact Us
Copyright ©, Camden Media Inc All Rights Reserved. See our User Agreement, Privacy Policy and Data Use Policy. The material on this site may not be reproduced, distributed, transmitted, cached or otherwise used, except with prior written permission of Futurism. Articles may contain affiliate links which enable us to share in the revenue of any purchases made.
Fonts by Typekit and Monotype.