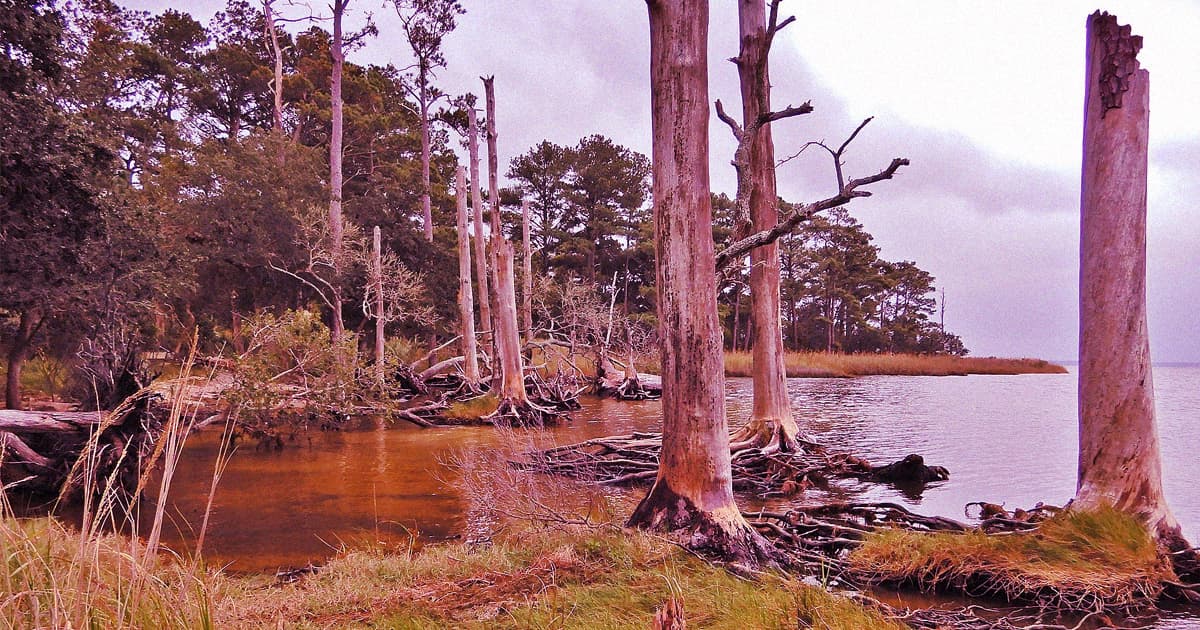 Desiccated "Ghost Forests," Killed by Rising Ocean, Can Be Seen From Space

Researchers are worried over the rise of "ghost forests" along the coast of North Carolina, as ecologist Emily Ury writes in an opinion piece for The Guardian.

As their name suggests, "ghost forests" are wide expanses of contiguous forests that have died or are in the process of dying. Rising sea levels are increasingly flooding forested areas with salt water, drowning coastal woodlands and stopping saplings from growing in their place.

Ury, who has studied forested wetlands along the coast of North Carolina, has found that these areas are becoming saltier thanks to climate change causing sea levels to rise — an alarming sign of the real effects of climate change.

The areas of woodlands that are dying off are becoming so big that they can be spotted from space. According to computer analysis, local wildlife refuges are already losing significant amounts of their forested wetlands due to rising sea levels.

In experiments, Ury and her colleagues simulated increasing salt levels by adding salt to tennis court-sized areas. When salt levels become too high, the trunks of trees start going pale and eventually lose their leaves and limbs. These trees are then replaced by more salt-tolerant plants including shrubs and grasses.

As a result of these "ghost forests" taking over, she wrote, wildlife — including several endangered species — is having to adapt.

But we're not entirely hopeless against ghost forests. We could, for instance, create "living shorelines" from plants, sand and rock to protect the wetlands from storms.

A more controversial approach, as Ury argues, would be to introduce salt-tolerant marsh plants to existing habitats. The reasoning goes that any type of marsh land is better than the open seas, even if it means replacing existing ecosystems.

It's yet another worrying sign that rising sea levels are having drastic effects on our world. The time to act is now, especially as climate change is making extreme weather events including droughts and hurricanes more frequent.