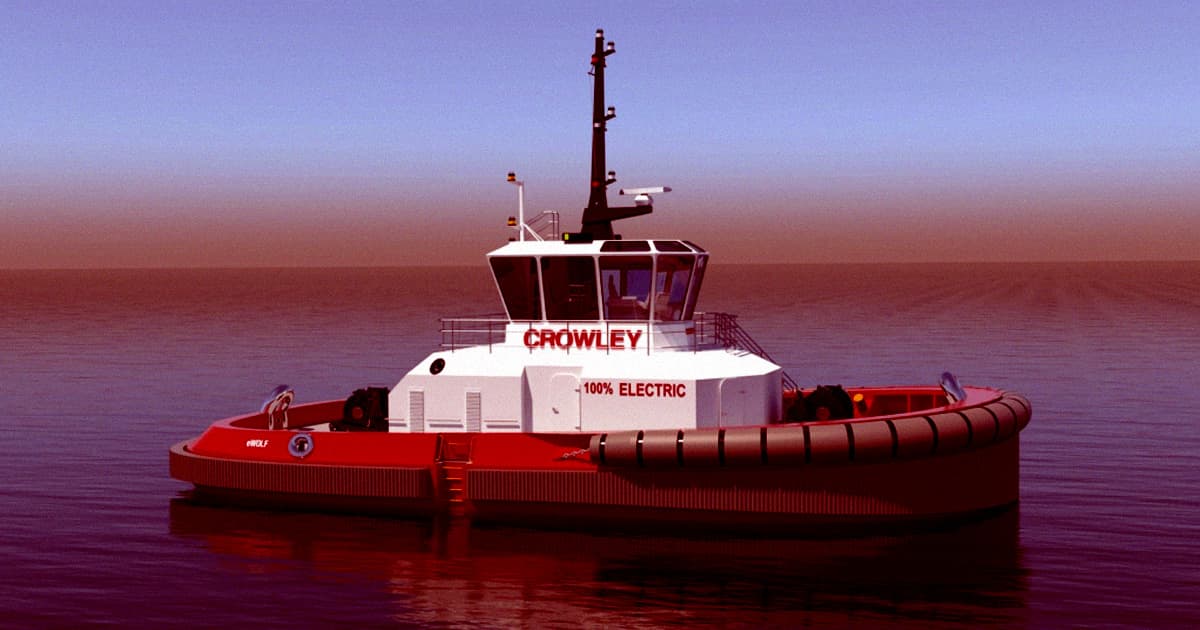 This Fully Electric Tugboat Will Have Absolutely Massive Battery Packs

Electric tugboats could be a "game changer."

Electric tugboats could be a "game changer."

Shipbuilder Crowley Maritime Corp announced this week that it's building and operating the first ever all-electric tugboat in the United States.

Switching tugboats to electric propulsion could have major implications for reducing the planet's carbon footprint. According to the company, the eTug will produce 178 tons of nitrogen oxide, 2.5 tons of diesel particulate matter, and 3,100 metric tons of carbon dioxide less than a conventional tugboat over the first ten years of its life.

In the company's announcement, Chairman Michael Zucchet of the Port of San Diego Board of Port Commissioners called the "first-of-its-kind" tugboat a "game changer."

"It checks all the boxes by providing environmental, economic, and operational benefits for our communities and maritime industry," he said.

Its propulsion system is made up of two massive 2100 kilowatt electric motors, capable of producing over 70 tons of bollard pull. That's a significant leap over the 50 to 60 tons of average pull of conventional tugboats.

It will also feature a gigantic 6 megawatt hour battery system — roughly the equivalent capacity of 60 Tesla Model S cars — that "can be maintained and upgraded for future battery technology improvements without any significant modifications to the vessel," according to a spec sheet.

Maritime transport is a significant contributor to global pollution, producing around 940 million tons of carbon dioxide emissions annually, or around 2.5 percent of global greenhouse gas emissions, according to the latest data.

Switching container ships, as well as other vessels needed to help them navigate increasingly busy ports, to electric propulsion only makes sense to make a dent in those emissions.

READ MORE: First fully electric tugboat in US to set sail with more than 6 MWh of batteries [Electrek]

More on tugboats: Another Ship Just Got Stuck in the Suez Canal

Pollution From Ships is Causing Lightning Storms Over Ocean Shipping Lanes
9. 28. 17
Read More
The World's First All-Electric Yacht Has a 40-Mile Range and a $500,000 Price Tag
9. 18. 17
Read More
Rest in Punks
The Ultimate Sign That NFTs Are Uncool: Museums Are Now Embracing Them
Yesterday
Read More
+Social+Newsletter
TopicsAbout UsContact Us
Copyright ©, Camden Media Inc All Rights Reserved. See our User Agreement, Privacy Policy and Data Use Policy. The material on this site may not be reproduced, distributed, transmitted, cached or otherwise used, except with prior written permission of Futurism. Articles may contain affiliate links which enable us to share in the revenue of any purchases made.
Fonts by Typekit and Monotype.