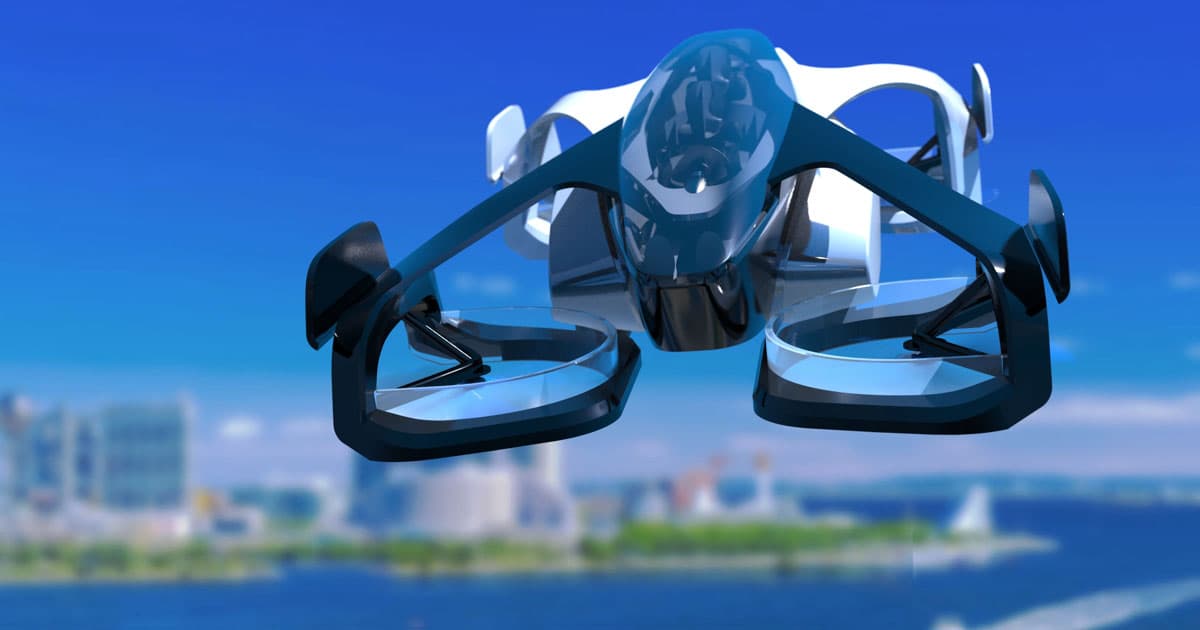 Flying Cars Are Actually, Finally Becoming a Reality in Japan

The Japanese government is pouring money into the development of flying cars with aims of commercializing the futuristic mode of transportation as soon as 2023, the Japan Times reports.

A number of flying car concepts are being developed throughout the globe, with the likes of Airbus, Boeing and Uber leading the charge.

The dream of covering smaller distances in vehicles capable of vertical take off and landing (VTOL) is very much alive — and that's especially true in Japan.

Japan's SkyDrive, one of the country's newest flying car startups, recently revealed the SD-XX, a sleek two-person eVTOL aircraft, about the size of a car, with a range of several tens of kilometers at 100 kmh (62 mph).

The company is hoping to complete its first flight test this summer, according to the Japan Times.

"We’re considering launching an air taxi service in big cities, either Osaka or Tokyo, with initial flights over the sea as it would be too risky to fly over many people all of a sudden," SkyDrive CEO Tomohiro Fukuzawa, a former engineer at Toyota, told the newspaper.

He also noted that development has been "accelerating rapidly with the rise in the number of personnel in the venture."

The startup is planning to start with round trips around various resorts, including Universal Studios Japan. "The initial model will fly basically on auto pilot, but it’s not 100 percent autonomous because a pilot would need to maneuver it in case of an emergency, for example," Fukuzawa said.

The goal of the startup is to sell at least 100 vehicles by 2028, each for the cost of an "expensive car," according to the CEO.

More on flying cars: This Flying Car Looks Like the DeLorean From “Back to the Future”

Air Ferry
Paris Will Use Electric Flying Cars to Get Passengers to the Olympics
11. 27. 21
Read More
Plane Nonsense
Experts Don't Know Why Boeing 777 Doused Children With Jet Fuel
1. 16. 20
Read More
Message Received
Boeing's Deadly 737 Max "Designed by Clowns," Wrote Employee
1. 10. 20
Read More
+Social+Newsletter
TopicsAbout UsContact Us
Copyright ©, Camden Media Inc All Rights Reserved. See our User Agreement, Privacy Policy and Data Use Policy. The material on this site may not be reproduced, distributed, transmitted, cached or otherwise used, except with prior written permission of Futurism. Articles may contain affiliate links which enable us to share in the revenue of any purchases made.
Fonts by Typekit and Monotype.