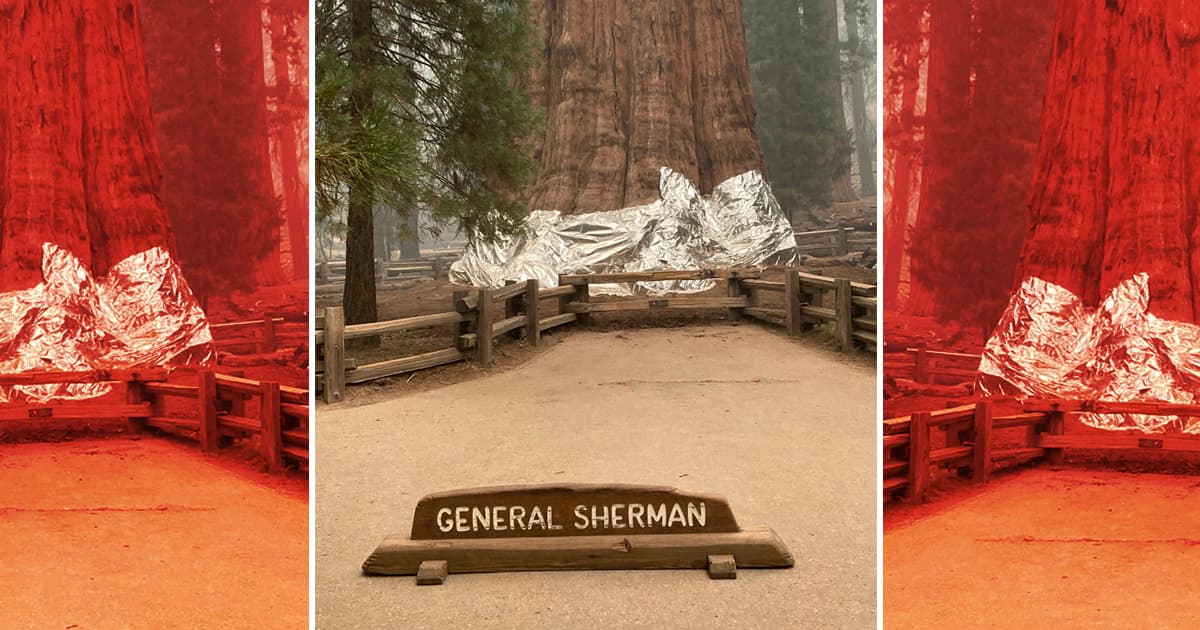 Massive wildfires in California are forcing firefighters to wrap massive sequoia trees in fire-resistant blankets, including General Sherman, a 275-foot specimen that is believed to be the world's largest tree by volume.

It's a climate change-driven disaster endangering some of the oldest and biggest living trees on our planet. General Sherman is estimated to be about 2,500 years old, the BBC reports. Tragic images shared online by the National Park Service show the base of the gigantic trunk wrapped in tinfoil-like blankets.

The world's largest tree was wrapped in foil to protect it from California wildfires. "General Sherman" is 2,500 years old and 275 feet tall.

"It’s a very significant area for many, many people, so a lot of special effort is going into protecting this grove," Rebecca Paterson, a spokeswoman for Sequoia and Kings Canyon National Parks, told the LA Times.

Some of the massive trees "are being prepped the same way that we would prep structures," Patterson added.

Beyond wrapping the trees in aluminum blankets, nearby vegetation was also cleared to make sure the fire didn't spread.

The blankets are made out of the same material that is used to wrap homes in wildfire-endangered areas, and used by firefighters as a last resort in case they ever find themselves surrounded by fire, according to the LA Times.

It's a sad state of affairs. It would be a national travesty of our own making if we lost one of the largest trees in the world to record-breaking wildfires.

READ MORE: California fires: General Sherman and other sequoias given blankets [The BBC]

Tech Hub
The Skies in California Basically Look Like the Apocalypse Right Now
9. 9. 20
Read More
Going Solar
California Now Requires Solar Panels on All New Homes
12. 6. 18
Read More
How California's Incredible New Solar Panel Law Is Historic for Green Energy
5. 10. 18
Read More
+Social+Newsletter
TopicsAbout UsContact Us
Copyright ©, Camden Media Inc All Rights Reserved. See our User Agreement, Privacy Policy and Data Use Policy. The material on this site may not be reproduced, distributed, transmitted, cached or otherwise used, except with prior written permission of Futurism. Articles may contain affiliate links which enable us to share in the revenue of any purchases made.
Fonts by Typekit and Monotype.