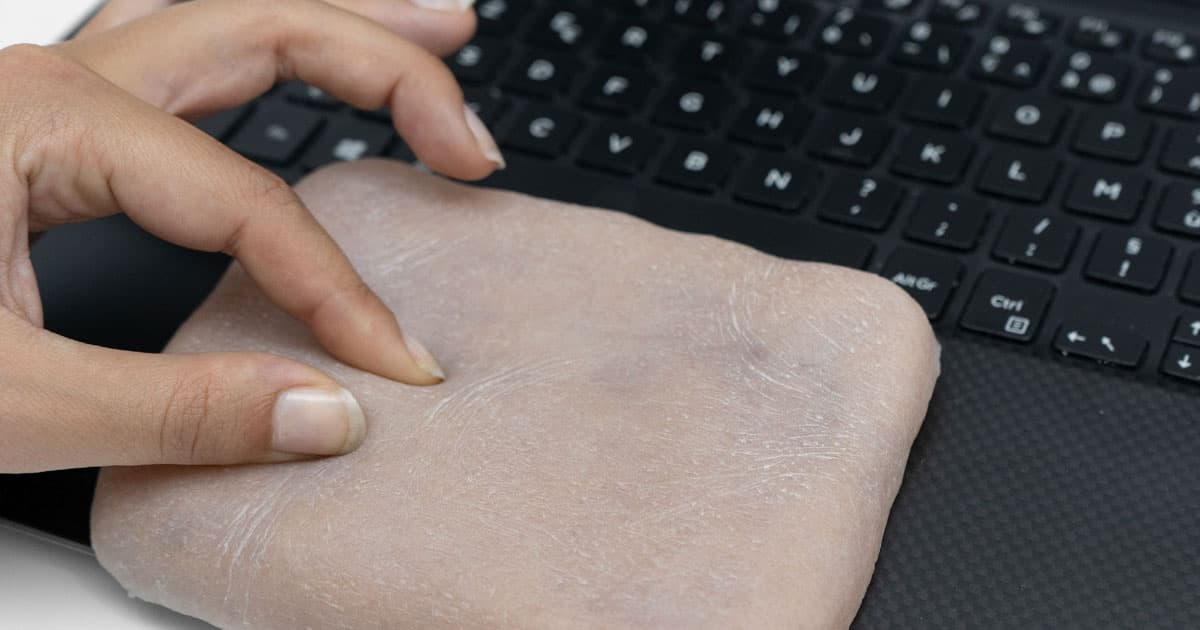 We wish we were kidding: "The intensity of the touch controls the size of the emojis."

We wish we were kidding: "The intensity of the touch controls the size of the emojis."

We're pretty used to swiping, tapping, and typing on touch screens and touchpads — but what if we swapped them out something more biological?

A team of researchers from France and the United Kingdom have developed a human-inspired artificial skin called "Project Skin-On" that claims to be able to "augment" interactive devices, including smartphones and wearables. They've wrapped the epidermis, which you can pinch and prod, around a smartphone, a laptop touchpad, and a smartwatch.

The skin not only looks and feels real, but it can detect a variety of gestures allowing electronic devices to "feel" the user's touch, distinguishing a tickle from a pet and so on.

"The idea is perhaps a bit surprising, but skin is an interface we are highly familiar with so why not use it and its richness with the devices we use every day?" lead supervisor Anne Roudaut, from the University of Bristol, said in a statement.

Furthermore, the skin could be used to convey the emotional resonance of the human touch without the limits of a keyboard and mouse.

"We implemented a messaging application where users can express rich tactile emotions on the artificial skin," said Marc Teyssier, lead author of the paper, which has yet to be published.

"The intensity of the touch controls the size of the emojis," Teyssier added. "A strong grip conveys anger while tickling the skin displays a laughing emoji and tapping creates a surprised emoji."

From Our Partners
Take The Fuss Out of Skin Care With Geologie, Specially Formulated For Men
7. 6. 21
Read More
From Our Partners
Boost your skin with specially formulated men's skincare from Geologie
4. 12. 21
Read More
The Science of Skincare (and Why Men Shouldn't Be So Quick to Dismiss It)
11. 6. 20
Read More
+Social+Newsletter
TopicsAbout UsContact Us
Copyright ©, Camden Media Inc All Rights Reserved. See our User Agreement, Privacy Policy and Data Use Policy. The material on this site may not be reproduced, distributed, transmitted, cached or otherwise used, except with prior written permission of Futurism. Articles may contain affiliate links which enable us to share in the revenue of any purchases made.
Fonts by Typekit and Monotype.