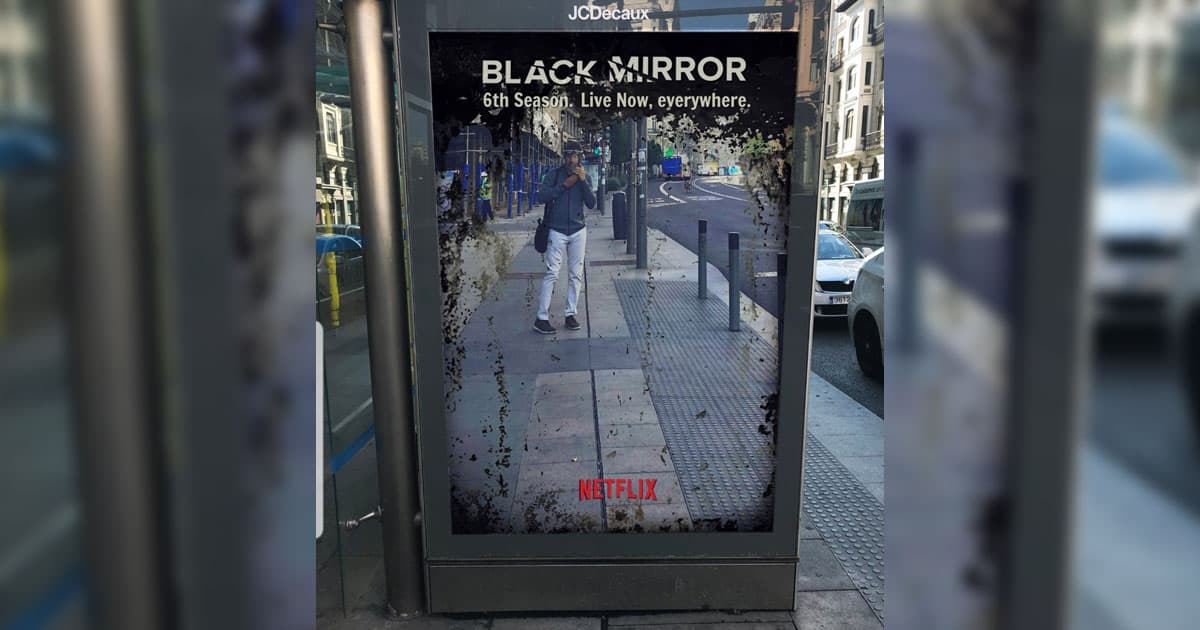 Madrid-based creative school Brother has created a fake advertisement for Netflix show "Black Mirror" — except that in a dark reflection of our tumultuous historical moment, it's just an actual mirror fixed to a bus canopy, suggesting that the real world has become as fraught as the dystopian show.

The stunt quickly went viral, with hundreds of thousands sharing images of the ad.

While the fake ad announced a sixth season of the controversial dystopian TV show — and with such conviction it fooled many on social media — creator Charlie Brooker told UK media last month that a sixth season is not actually in the works.

And for a pertinent reason. "At the moment, I don’t know what stomach there would be for stories about societies falling apart, so I’m not working away on one of those," Brooker told Radio Times. "I’m sort of keen to revisit my comic skill set, so I’ve been writing scripts aimed at making myself laugh."

Some onlookers were dismayed that the advertisement was fake, suggesting that living out a season of "Black Mirror" may just be more palatable than experiencing the nightmare that 2020 turned out to be.

"This would actually be oddly reassuring if it were true," one Twitter user wrote in response to the fake ad. "Why is this season so long?" another wrote.

Leave Twitter Alone
Elon Musk Meeting With Advertisers, Begging Them Not to Leave Twitter
11. 3. 22
Read More
Dream Hackers
Scientists Warn That Marketers Are Trying to Inject Ads Into Dreams
11. 21. 21
Read More
FROM OUR PARTNERS
Best CBD Oil For Cats: 6 Best Products
11. 21. 21
Read More
+Social+Newsletter
TopicsAbout UsContact Us
Copyright ©, Camden Media Inc All Rights Reserved. See our User Agreement, Privacy Policy and Data Use Policy. The material on this site may not be reproduced, distributed, transmitted, cached or otherwise used, except with prior written permission of Futurism. Articles may contain affiliate links which enable us to share in the revenue of any purchases made.
Fonts by Typekit and Monotype.