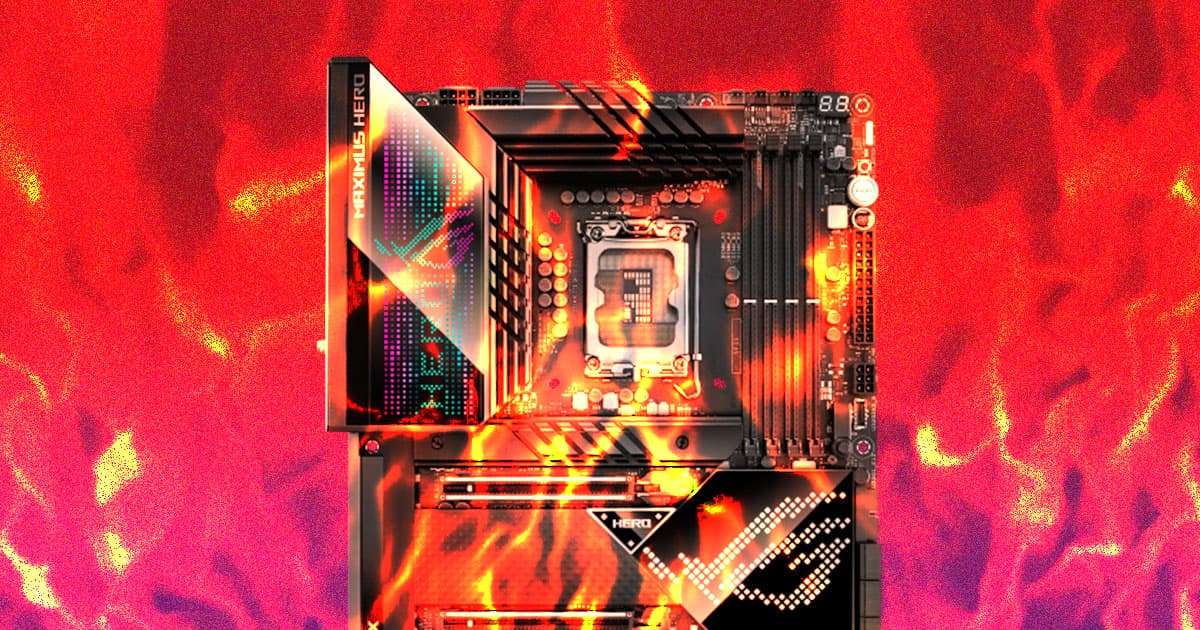 As if the global chip shortage hasn't been unkind enough to PC builders and gamers, some are noticing their Asus motherboards heating up and — in rare cases — catching fire, Tom's Hardware reported last week.

The boards, which are a high-end model targeted at gamers called the ROG Maximus Z690 Hero that retails for $600, appear to have a backwards capacitor that may be causing neighboring transistors to burn out, as YouTuber Buildzoid suggested in a recent video.

In the worst case, as one Reddit user pointed out in a post last month, the mix up caused two transistors to visibly generate smoke.

Fortunately, in most if not all cases, the systems shut down before their PCs could fully burst into flames, according to Ars Technica.

Asus publicly acknowledged the issue last week, with its PR team starting to fan out the flames. The company set up a webpage that allows users to check if they own a faulty motherboard.

"We have recently received incident reports regarding the ROG Maximus Z690 Hero motherboard," a statement received by Tom's Hardware reads. "In our ongoing investigation, we have preliminarily identified a potential reversed memory capacitor issue in the production process from one of the production lines that may cause debug error code 53, no post, or motherboard components damage."

The company is also working with "relevant government agencies on a replacement program" — so there may be some hope for affected users after all.

More on PCs: New Gaming PC Consumes so Much Power That It's Banned in California

FROM THE DEPT. OF THINGS TO BUY
Best ASUS Routers of 2023
5. 17. 22
Read More
Space Junk News
Two Large Chunks of Space Debris Just Almost Collided in an Epic Disaster
5:06 PM
Read More
Ring The Alarm
Whistleblower Claims Facebook Can Secretly Drain Your Phone's Battery on Purpose
3:40 PM
Read More
+Social+Newsletter
TopicsAbout UsContact Us
Copyright ©, Camden Media Inc All Rights Reserved. See our User Agreement, Privacy Policy and Data Use Policy. The material on this site may not be reproduced, distributed, transmitted, cached or otherwise used, except with prior written permission of Futurism. Articles may contain affiliate links which enable us to share in the revenue of any purchases made.
Fonts by Typekit and Monotype.