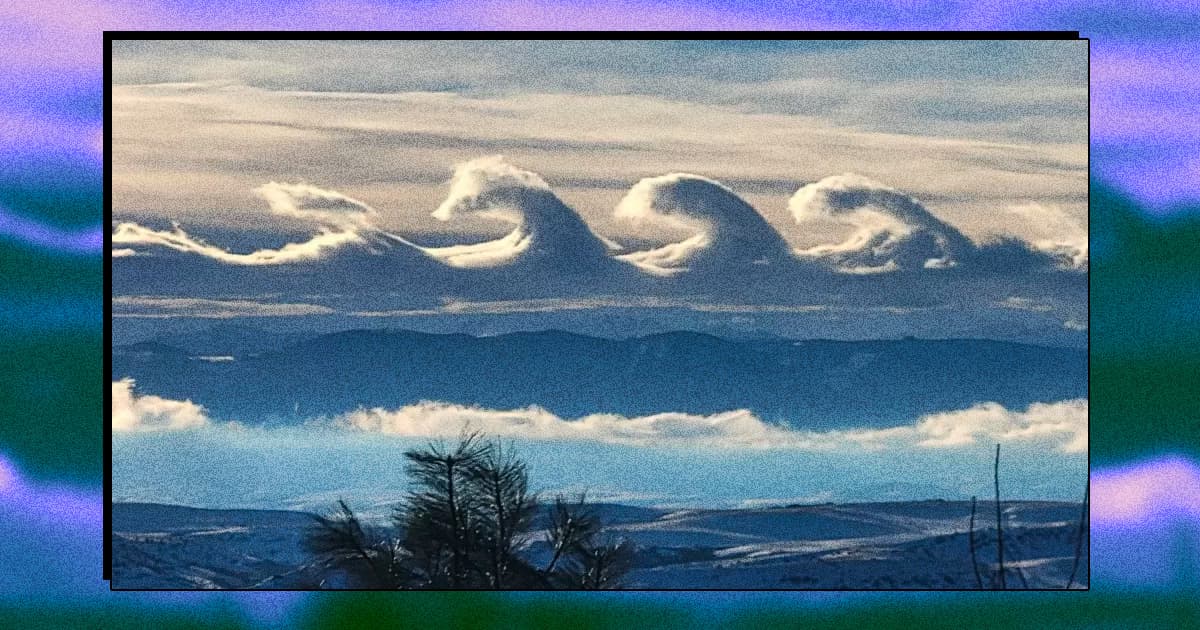 A cloudy day can often make for a dreary occasion, but not in this case.

On Tuesday, a lucky group of skywatchers in Wyoming were mesmerized as they looked to the heavens and witnessed a rare and awe-inspiring formation of clouds, majestically enthroned over the Bighorn Mountains.

It's so perfectly picturesque that it looks a bored weather god strung four prints of "Under the Wave off Kanagawa" together to amuse themself.

"This was special and I immediately knew I needed to capture it," Rachel Gordon, a local who snapped the photo, told the BBC.

Man, are we grateful she did. So get your heads in the clouds and have a look at the pictures for yourself, or this stunning timelapse spotted by The Washington Post.

And if the whole thing looks very painterly to you, it's probably because these are believed to be the same kind of clouds that inspired Vincent Van Gogh's "Starry Night."

How incredible! 😲
Rachel Gordon was treated to a textbook display of what meteorologists call Kelvin-Helmholtz wave clouds over the Big Horn Mountains near Sheridan, Wyoming, on Dec. 6, 2022. https://t.co/IKxRmREUhI pic.twitter.com/wpobYwDGcU

This seldom witnessed formation is known as a fluctus, or more technically a Kelvin-Helmholtz wave cloud, caused by an instability of the same name that arises when a fast-moving upper stream of air travels even faster than a lower stream.

Under the right conditions, the phenomenon can pull up the top layer of an existing cloud, forming the grand and flowing wave-like peaks depicted.

"Part of the beauty of Kelvin-Helmholtz clouds is that they really show up the fluidity of the atmosphere," explained BBC meteorologist Matt Taylor.

"How, like waves in the ocean, the atmosphere moves and responds to the environment around it," he added. "The air is effectively rising up and tumbling over on itself."

More on nature: This Extreme Closeup of an Ant Is Giving Us Actual Nightmares