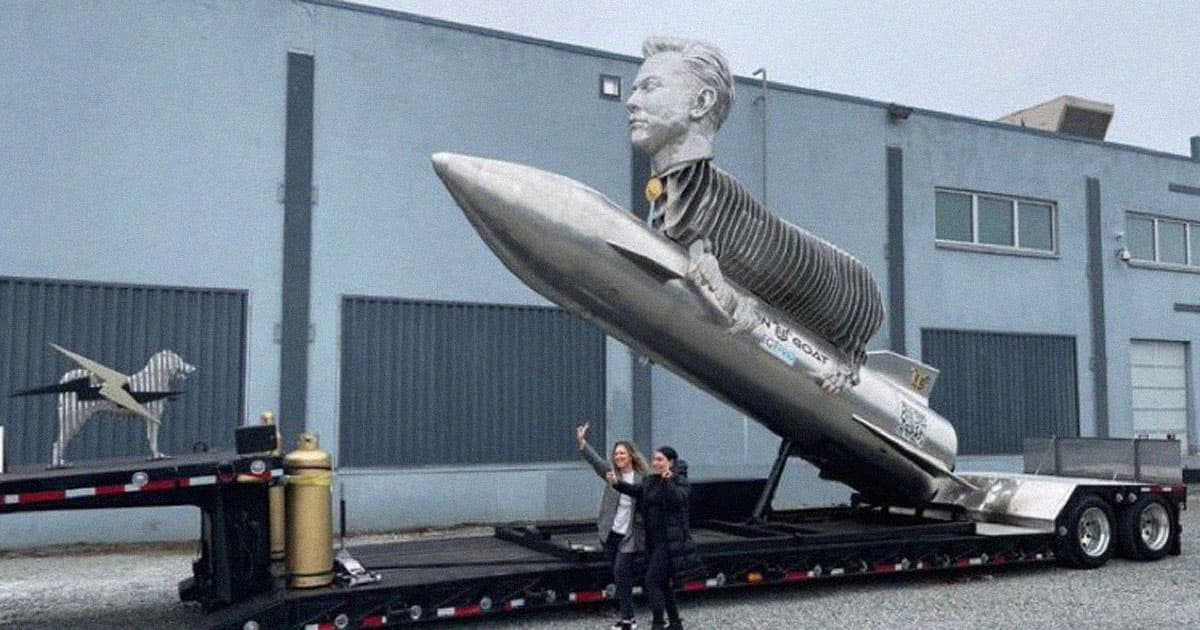 A bunch of crypto-pilled Elon Musk fans spent $600,000 to build a giant statue that features the new Twitter czar's head on a goat's body, riding a rocket — and their coin crashed after they took the grotesque work of "art" public.

Over the holiday weekend, the great minds behind the Elon Goat Token — an in-your-face homage to the man they consider to be the "Greatest of All Time," or GOAT — decided to unleash upon the streets of Austin, Texas their metallic Frankenstein's monster: a bizarre behemoth that's supposedly the face of Musk on a goat's body, but that looks a lot more like if the owner of Tesla, SpaceX, and Twitter was grafted onto Dune's infamous shai hulud sandworms.

🐐 Representatives of the Elon Goat Token brought a goat statue with the head of Elon Musk to the Tesla headquarters - they spent $600,000 on this.

The billionaire has not yet responded 🤔 pic.twitter.com/5zue5ix3c3

As commentators have noted, Musk himself hasn't yet acknowledged the bizarre homage in any way — but the crypto markets sure have.

Indeed, the price of the already-low-value coin has plummeted dramatically since November 26, which was the day the coin's makers held their "#GOATsgiving" unveiling and drive-by of the statue.

As of right now, the Elon Goat Token is worth a very small fraction of a cent, though again, it wasn't worth all that much more at its Thanksgiving Day high, which totaled about $0.002 per coin.

The whereabouts of the strange statue haven't been reported since Saturday, when it was "delivered" to Tesla's Austin Gigafactory. Whether the new Twitter owner has seen it or not is anyone's guess.

Is this the last gasp of the crypto hype machine? Only time will tell.

More on the Elon of it all: Elon Musk's Crying About Trent Reznor Shows That He Is a Big, Big Baby

Crypto Cash Out
Tesla Sells Off Most of Its Bitcoin, at a Huge Loss
7. 21. 22
Read More
Crikey!
Dogecoin Cocreator Slams Elon Musk as a "Grifter"
5. 31. 22
Read More
Right Clicker Musktality
Famous NFT Hater Elon Musk Changes Profile Picture to Stolen Apes
5. 4. 22
Read More
+Social+Newsletter
TopicsAbout UsContact Us
Copyright ©, Camden Media Inc All Rights Reserved. See our User Agreement, Privacy Policy and Data Use Policy. The material on this site may not be reproduced, distributed, transmitted, cached or otherwise used, except with prior written permission of Futurism. Articles may contain affiliate links which enable us to share in the revenue of any purchases made.
Fonts by Typekit and Monotype.