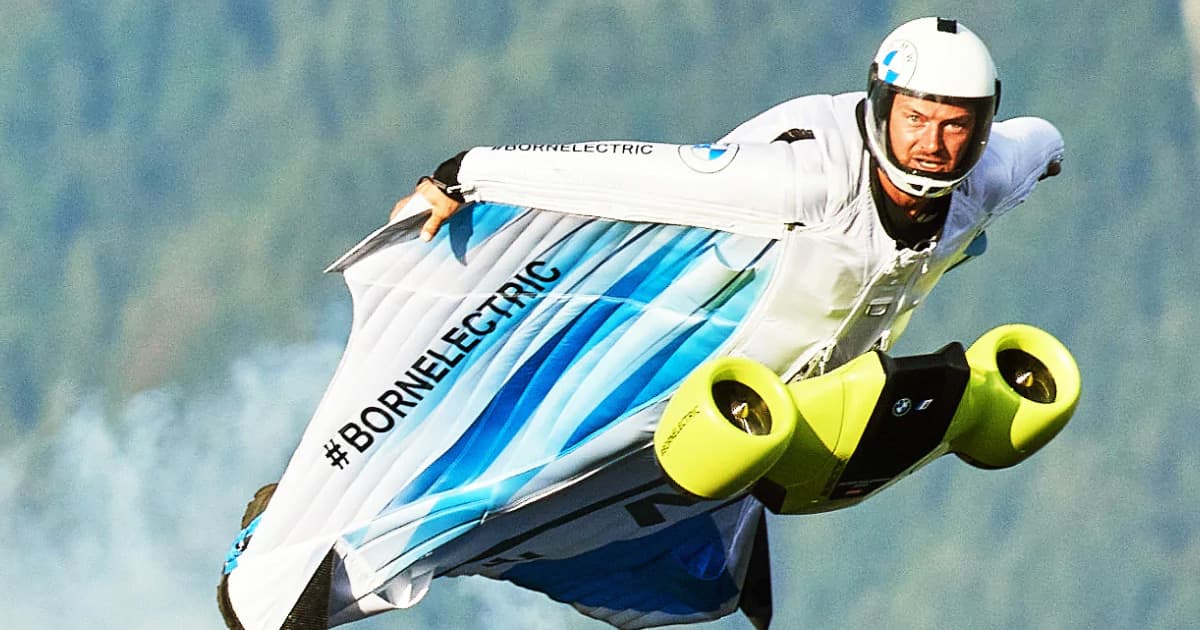 What Goes Down Can Go Up

Watch a guy wearing it jump out of a helicopter — and soar over the Austrian Alps.

Watch a guy wearing it jump out of a helicopter — and soar over the Austrian Alps.

Engineers at German carmaker BMW's Designworks studio have created a chest-mounted set of electric impellers that allow a wingsuit to accelerate to a blistering 186 mph, New Atlas reports.

Rather than just gliding, like a conventional wingsuit, the BMW propulsion system can put out 20 horsepower, allowing its wearer to actually gain back altitude — albeit only as long as the suit's limited charge lasts.

The maniacal invention has already been tested in specialized wing tunnels and has been used during 30 test jumps. During its first public demonstration, the suit allowed stuntman and daredevil Peter Salzmann to zip past the Del Brüder mountain peaks in the Austrian Alps.

Salzmann — and two other stuntmen kitted out with regular, unpowered wingsuits — jumped out of a helicopter at 10,000 feet. Once they started flying in formation, Salzman rocketed past them and flew over a final mountain peak. His fellow divers, without the extra power, had to fly around it.

It's still unclear if BMW will ever build such a wingsuit for the general public. The amazing invention seems to be largely a PR push for the carmaker's latest electric SUV, the iX3.

"In a relaxed atmosphere one evening after a day of testing, we threw out lots of ideas about how we could improve performance," Salzmann recounted in a press release. "One of them was a supporting motor – and it’s an idea I just couldn’t shake. I found the idea of being able to jump from my local mountain wearing the wingsuit and land in my garden fascinating."

More on jet suits: Hey Elon Musk, Hire This Guy in China Who Built His Own Amazing Jetpack Suit