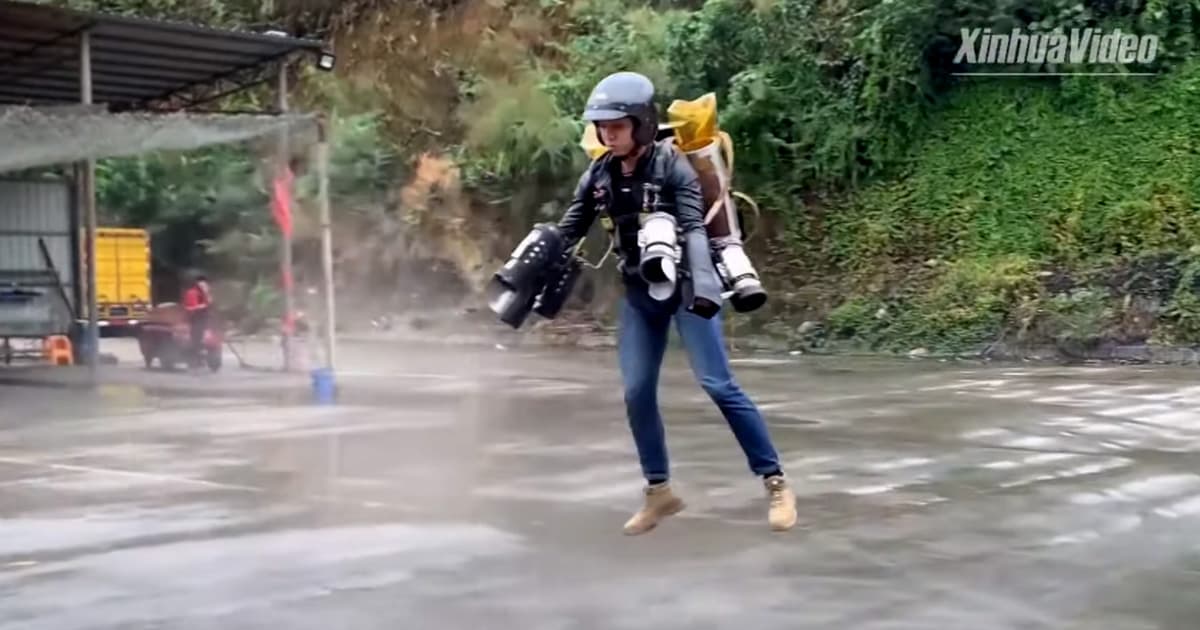 Hey Elon Musk, Hire This Guy in China Who Built His Own Amazing Jetpack Suit

A man from China named Liu Dongsheng has built a working jetpack suit — and he pulled it off in about two years, for just $100,000.

That gives us an idea. Elon Musk, how about you hire this guy? You could let him spin up the Tesla Jetpack Division.

The jetpack, shown off in a video posted by state-owned China News Service, is reminiscent of the one built by UK-based Gravity Industries, with what appear to be a pair of jets affixed to the ends of each arms and a fuel tank strapped to the back.

According to China News Service, the jetpack can fly to an altitude of 200 meters and cover five to ten kilometers — but for safety reasons, Liu isn't planning to go higher than three meters for safety reasons.

Unsurprisingly, the inventor was reportedly inspired by "Iron Man."

Liu faces stiff competition in the jetpack market. Gravity Industries, founded in 2017 by "real-life Iron Man" Richard Browning, has developed a strikingly similar suit and has set several speed records over the last few years — though it's almost certainly spent more than $100,000 in the process.

California-based Jetpack Aviation has also pioneered a jetpack suit, claiming to be "the first company to design and manufacture a true jetpack for personal flight," according to a statement by CEO David Mayman.

Up, Up, and Away!
They Let Me Fly an Experimental Jetpack and... Well, I Survived
8. 15. 22
Read More
Personal Aviation
Inventor Says He's Built a Real Life Flying Motorcycle
5. 6. 22
Read More
Electric Cars May Be Cheaper Than Gas Guzzlers in 7 Years — If People Actually Buy Them
3. 23. 18
Read More
+Social+Newsletter
TopicsAbout UsContact Us
Copyright ©, Camden Media Inc All Rights Reserved. See our User Agreement, Privacy Policy and Data Use Policy. The material on this site may not be reproduced, distributed, transmitted, cached or otherwise used, except with prior written permission of Futurism. Articles may contain affiliate links which enable us to share in the revenue of any purchases made.
Fonts by Typekit and Monotype.