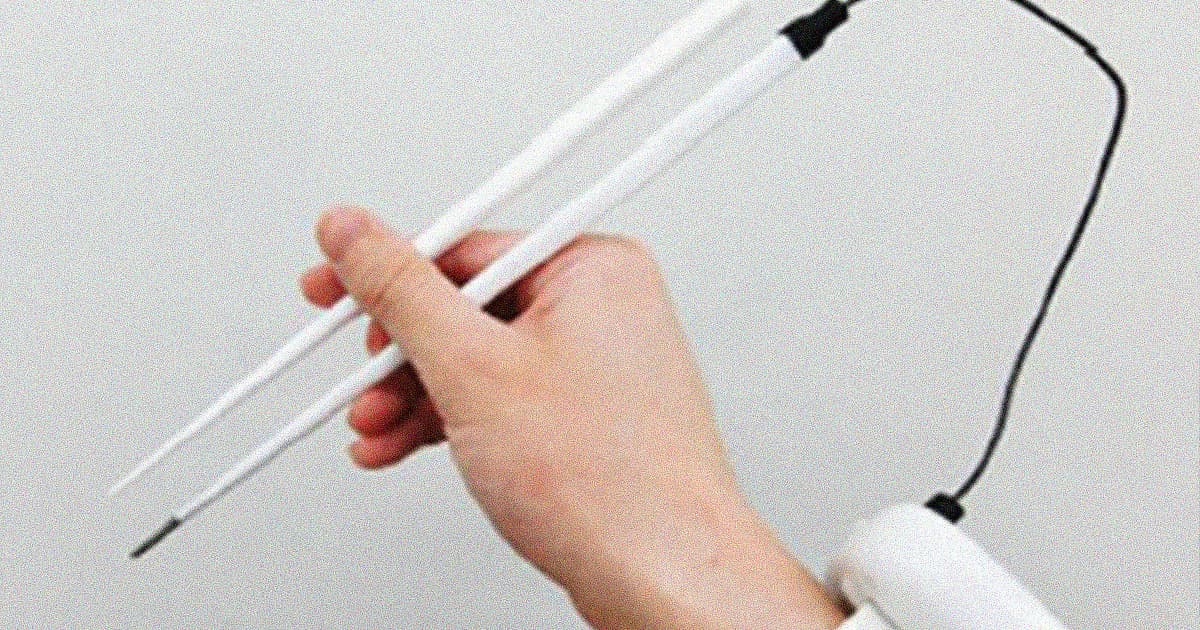 These Chopsticks Make Your Food Taste Better By Electrocuting Your Tongue

It's the first ever demonstration of "salty taste enhancement via electrical stimulation."

It's the first ever demonstration of "salty taste enhancement via electrical stimulation."

Meiji University professor Homei Miyashita, inventor extraordinaire, is expanding beyond TVs that allow you to taste what you’re watching — and has developed a set of special electric chopsticks that he says can enhance the taste of food.

The chopsticks, a collaboration between beverage company Kirin Holdings and the Miyashita Laboratory, are aimed at people who follow a low-sodium diet, in an effort to give them an enhanced perception of saltiness. According to a press release, it’s the first ever demonstration of “salty taste enhancement via electrical stimulation.”

Too much salt in the diet has been linked to a variety of lifestyle-related diseases, including hypertension and kidney disease.

“This technology may prove helpful for people trying to, or need to maintain a low-sodium diet,” the statement reads.

And that’s pretty relevant in Japan. According to Reuters, the country’s traditional diet skews towards salty flavors, with the average Japanese adult consuming roughly 10 grams of salt a day, twice the amount recommended by the World Health Organization.

The chopsticks, which feature a wire connected to a wrist-mounted power source, apparently work surprisingly well. In experiments, Miyashita and his team found that the weakly electrified chopsticks were able to increase the perception of saltiness by a factor of 1.5 in a number of test subjects between the ages of 40 and 65.

The chopsticks could prove to be a game changer for those trying to keep their sodium intake low.

“To prevent these diseases, we need to reduce the amount of salt we take,” Kirin researcher Ai Sato told Reuters.

The stakes — or steaks if you will — are real.

“If we try to avoid taking less salt in a conventional way, we would need to endure the pain of cutting our favorite food from our diet, or endure eating bland food,” Sato added.

More on taste: Scientist Invents Screen That Creates Flavors When You Lick It

This Terrifying Robot Wolf Is Protecting the Crops of Japanese Farmers
3. 8. 18
Read More
Japan’s “Invisible Train” Will Hit the Tracks in 2018
4. 14. 16
Read More
Forget Credit Cards—Japan Wants to Use Fingerprint Payments
4. 13. 16
Read More
+Social+Newsletter
TopicsAbout UsContact Us
Copyright ©, Camden Media Inc All Rights Reserved. See our User Agreement, Privacy Policy and Data Use Policy. The material on this site may not be reproduced, distributed, transmitted, cached or otherwise used, except with prior written permission of Futurism. Fonts by Typekit and Monotype.