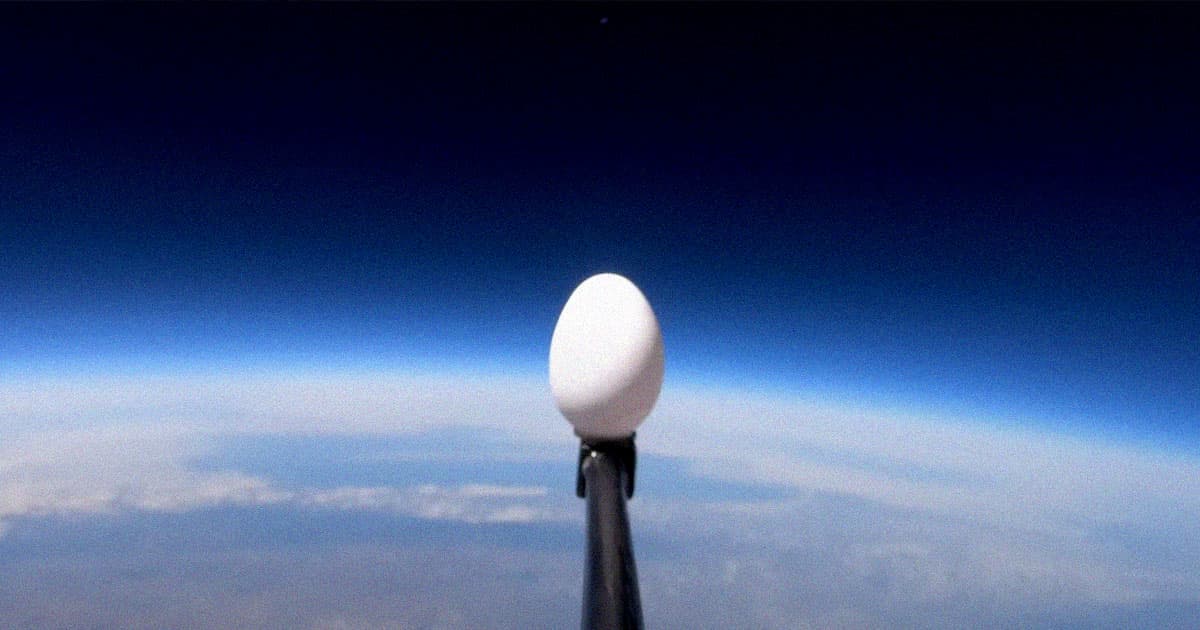 Former NASA Guy Drops Egg Out of Space, Tries to Keep It From Breaking

It took literal NASA engineering to pull it off.

It took literal NASA engineering to pull it off.

What would happen if you dropped an egg out of space?

It's the ultimate take on the age-old challenge you may already know from primary school: how do you design a contraption to gently land an egg from a steep drop without breaking?

In a new video, YouTuber extraordinaire and NASA alum Mark Rober took it upon himself, with help from self-taught aerospace engineer Joe Bernard from the YouTube Channel BPS.space, to launch an egg to the edge of space, only to release it and have it land back on the ground safely.

As it turns out, pulling it off proved to be extremely difficult, despite Rober's nine-year stint at NASA's Jet Propulsion Laboratory.

In fact, it took Rober and his team three years and many different design iterations to come up with one that worked.

The egg had to reach its terminal velocity of 75 mph for the fall to really qualify as "falling from space." Over the three years, Rober and his team came up with several weather balloon and rocket-guided solutions to guide the egg down to the surface.

But the engineering challenges involved seemed overwhelming, ranging from failing balloons to stinging technical issues to bad weather. Rober even had to account for the fact that the egg couldn't freeze, and had to come up with a warming solution.

In the end, Rober and his team came up with a parachute made from scrap nylon material used during testing of the parachute of NASA's Curiosity Mars rover. An inflatable cushion pad, inspired by the airbags of NASA's Spirit and Opportunity Mars rovers, gave the egg a protective cover right before landing.

After years of attempts, the team launched a helium-filled balloon to roughly 100,000 feet — which may not be the official edge of space, but still allowed for the egg to reach its terminal velocity.

But it ended up veering off course, forcing the team to chase the egg down. Fortunately, it survived the plummet intact.

"Next year we’re doing this on Mars," Rober wrote in the video's caption.

Brick by Brick
This Engineer Published Scientific Papers Using a Lego Microscope
4. 30. 20
Read More
Balloon Pop
Footage Shows Chinese Balloon Being Shot Down
Yesterday
Read More
Bird Crap
It Looks Like Elon Musk Is Actually Building a Twitter Payment Platform
Yesterday
Read More
+Social+Newsletter
TopicsAbout UsContact Us
Copyright ©, Camden Media Inc All Rights Reserved. See our User Agreement, Privacy Policy and Data Use Policy. The material on this site may not be reproduced, distributed, transmitted, cached or otherwise used, except with prior written permission of Futurism. Articles may contain affiliate links which enable us to share in the revenue of any purchases made.
Fonts by Typekit and Monotype.