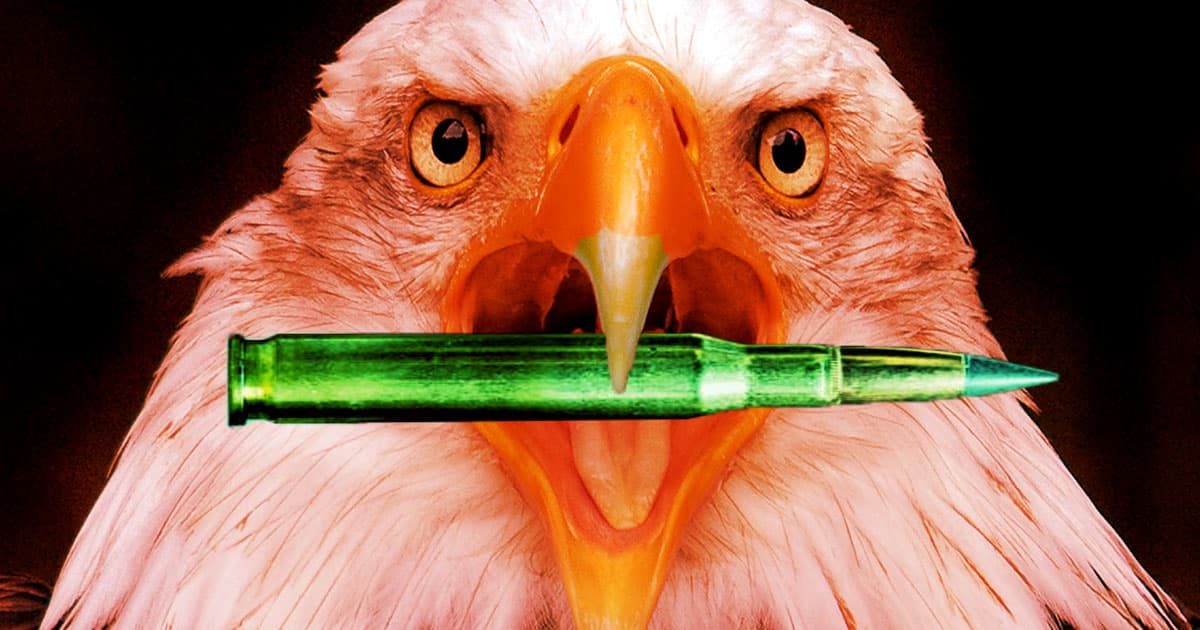 Eagles Have Chronic Lead Poisoning Because America Is So Full of Bullets, Scientists Warn

Will somebody please think of the eagles?

Will somebody please think of the eagles?

Bald and golden eagles in the US are facing a new existential threat: lead poisoning caused by bullet fragments left behind by hunters, Insider reports. In other words, the national bird of the United States is suffering from one of the most American pastimes.

"Every single time a lead bullet hits a deer, it fragments into many, many pieces," research wildlife biologist Todd Katzner, coauthor of a new study on the phenomenon published in the journal Science, told Insider. "It only takes a tiny fragment, something the size of the head of a pin, to kill an eagle."

The team discovered a shockingly high prevalence of lead poisoning among the two types of eagles after examining data from 2010 to 2018, suggesting widespread hunting is posing a very real threat to bird species in the US — beyond just shooting and killing wildlife, that is.

Lead poisoning can wreak havoc on the health of birds, causing lesions or even paralysis and death in the most acute cases.

Worse yet, the researchers found the rates of lead poisoning were high enough to actually impact the growth of the species.

Fortunately, there's an easy way to mitigate at least some of these cases: convincing hunters to switch to non-lead bullets. That's something they're likely to do willingly "once they find out they're potentially poisoning animals," coauthor Vince Slabe, a research wildlife biologist at the nonprofit Conservation Science Global, told Insider.

READ MORE: Nearly half of bald and golden eagles in the US have chronic lead poisoning, most likely from bullet fragments [Insider]

Pig Heaven
Assault Rifles Won't Solve Your Feral Hog Problem, Say Scientists
8. 7. 19
Read More
As It Turns Out, Environmentally 'Protected' Lands Really Aren't
5. 18. 18
Read More
To Combat Wildlife Trafficking, Tech Companies Take a Stand
3. 12. 18
Read More
+Social+Newsletter
TopicsAbout UsContact Us
Copyright ©, Camden Media Inc All Rights Reserved. See our User Agreement, Privacy Policy and Data Use Policy. The material on this site may not be reproduced, distributed, transmitted, cached or otherwise used, except with prior written permission of Futurism. Articles may contain affiliate links which enable us to share in the revenue of any purchases made.
Fonts by Typekit and Monotype.