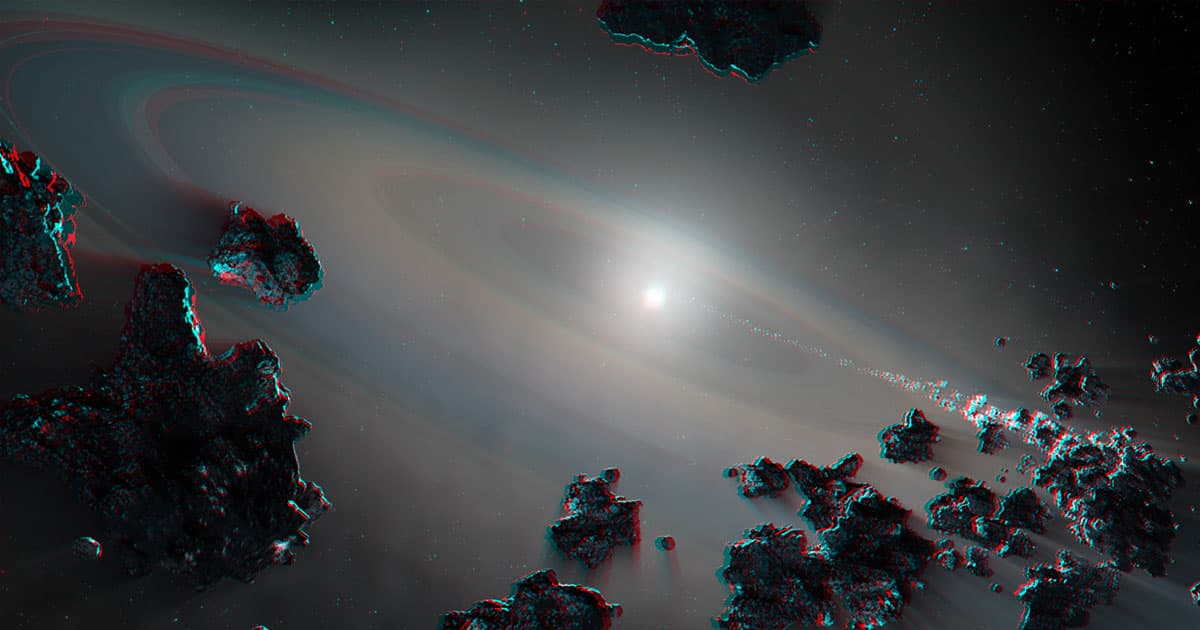 A dying, Sun-like star violently devoured its solar system, and is now actively spitting out chunks of its unlucky neighbors. Gruesome? Sure. But according to a NASA press release, astronomers believe that this particular star-borne suburb might offer an unprecedented glimpse into planetary beginnings.

The dying star at hand is now a White Dwarf, unceremoniously dubbed G238-44. While White Dwarves — which, essentially, are the remains of stars that have burned through their nuclear fuel, thus shedding their outermost layers — have been studied for quite some time, the astronomers say that the postmortem planet matter they're seeing in the celestial cannibal's atmosphere contains a uniquely diverse range of celestial material, some rocky-metallic and some icy.

As NASA details, this suggests that G238-44's death was fierce enough to reach the edges of its solar subdivision, consuming cosmic companions with very different makeups. According to the astronomers, this is the elemental combination theoretically required to create a water-bearing planet; it's posited that Earth's oceans were made possible by icy asteroids crashing into our nascent Pale Blue Dot.

"Life as we know it requires a rocky planet covered with a variety of elements like carbon, nitrogen, and oxygen," said Benjamin Zuckerman, a UCLA professor who worked on the research, in NASA's press release. "The abundances of the elements we see on this white dwarf appear to require both a rocky and a volatile-rich parent body – the first example we've found among studies of hundreds of white dwarfs."

The researchers from UCLA, the University of California, San Diego, and the Kiel University in Germany used data from NASA observatories from around the world, along with the Space Hubble Telescope and the now-retired Far Ultraviolet Spectroscopic Explorer (FUSE), to analyze the composition of G238-44's atmosphere in the wake of its chaotic demise.

Planets take hundreds of millions of years to form, so we likely won't get to see any that may come of this celestial meltdown. Still, this discovery is an incredible opportunity to examine the development of planets other than our own — and also provides compelling evidence that there's off-world water after all, or at least there has been in the past.

"We have never seen both of these kinds of objects accreting onto a white dwarf at the same time," added Ted Johnson, the lead researcher behind the work, in the release. "By studying these white dwarfs, we hope to gain a better understanding of planetary systems that are still intact."