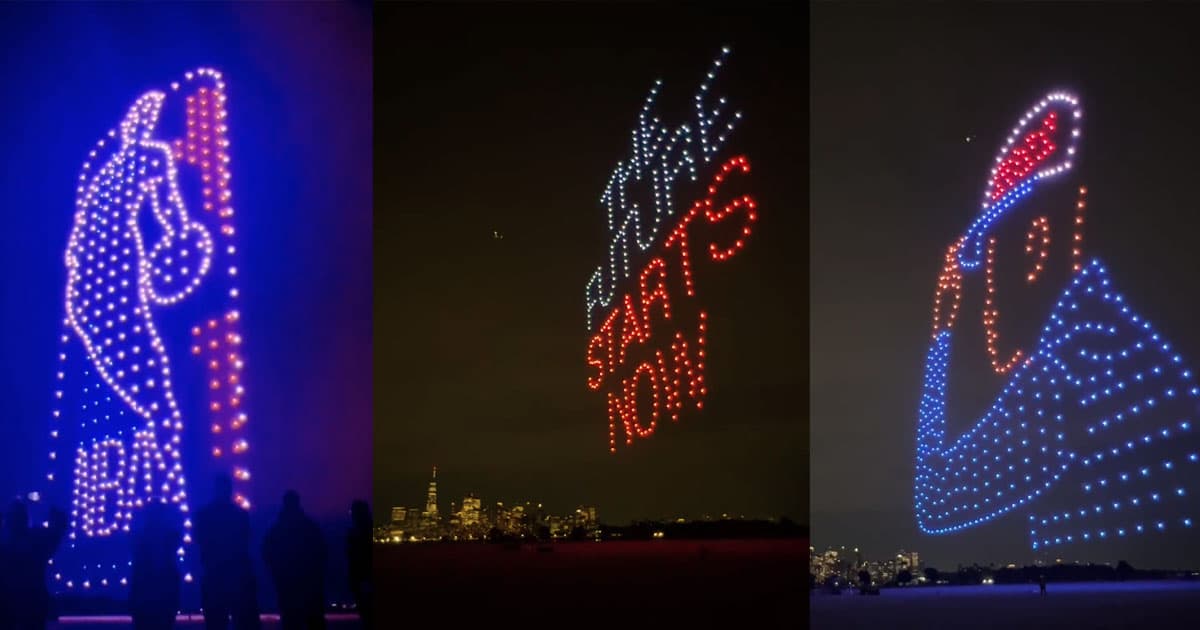 "I think it’s outrageous to be spoiling our city’s skyline for private profit."

"I think it’s outrageous to be spoiling our city’s skyline for private profit."

Someone thinks it's a great idea to fly 500 drones over New York City to create a huge ad in the sky on Thursday evening. Because New Yorkers certainly don't have any historical reason to mistrust unknown aircraft over their skyline, right?

As Gothamist reports, the drone swarm is part of a "surreal takeover of New York City’s skyline" on behalf of — we shit you not — the mobile game Candy Crush.

Fernanda Romano, Candy Crush's chief marketing officer, told Gothamist that the stunt will "turn the sky into the largest screen on the planet" using the small, light-up drones.

Though this is not the first time the Manhattan skyline has been used as ad space — that distinction goes to the National Basketball Association and State Farm, which did a similar stunt this summer during the NBA draft — local lawmakers are ticked off about it nonetheless.

"I think it’s outrageous to be spoiling our city’s skyline for private profit," Brad Hoylman, a state senator that represents Manhattan's West Side in the NY Legislature, told the local news site. "It’s offensive to New Yorkers, to our local laws, to public safety, and to wildlife."

Indeed, as the NYC Audubon Society noted in a tweet, the Candy Crush crapshoot "could disrupt the flight patterns of thousands of birds flying through NYC, leading to collisions with buildings" as they migrate.

Beyond the harm this will do to birds and the annoyance it will undoubtedly cause the famously-grumpy people of New York, this stunt is also going down with very little warning, considering that Gothamist is one of the only news outlets even reporting on it ahead of time.

While most viewers will hopefully be able to figure out what's going on pretty quickly, the concept of seeing unknown aircraft above the skyline is a little too reminiscent of 9/11 for comfort — and if Candy Crush took that into consideration, they haven't let on.

So here's hoping this event shocks and awes Thursday night city-goers in a good way, and not in the way that makes them panic.

Bumper Drones
Cargo Drones Have One Problem: Not Crashing Into Things
3. 28. 19
Read More
Amazon Wants to Use Drones to Recharge the Batteries of Electric Vehicles
10. 19. 17
Read More
General Motors Will Soon Test Self-Driving Cars in New York City
10. 18. 17
Read More
+Social+Newsletter
TopicsAbout UsContact Us
Copyright ©, Camden Media Inc All Rights Reserved. See our User Agreement, Privacy Policy and Data Use Policy. The material on this site may not be reproduced, distributed, transmitted, cached or otherwise used, except with prior written permission of Futurism. Articles may contain affiliate links which enable us to share in the revenue of any purchases made.
Fonts by Typekit and Monotype.