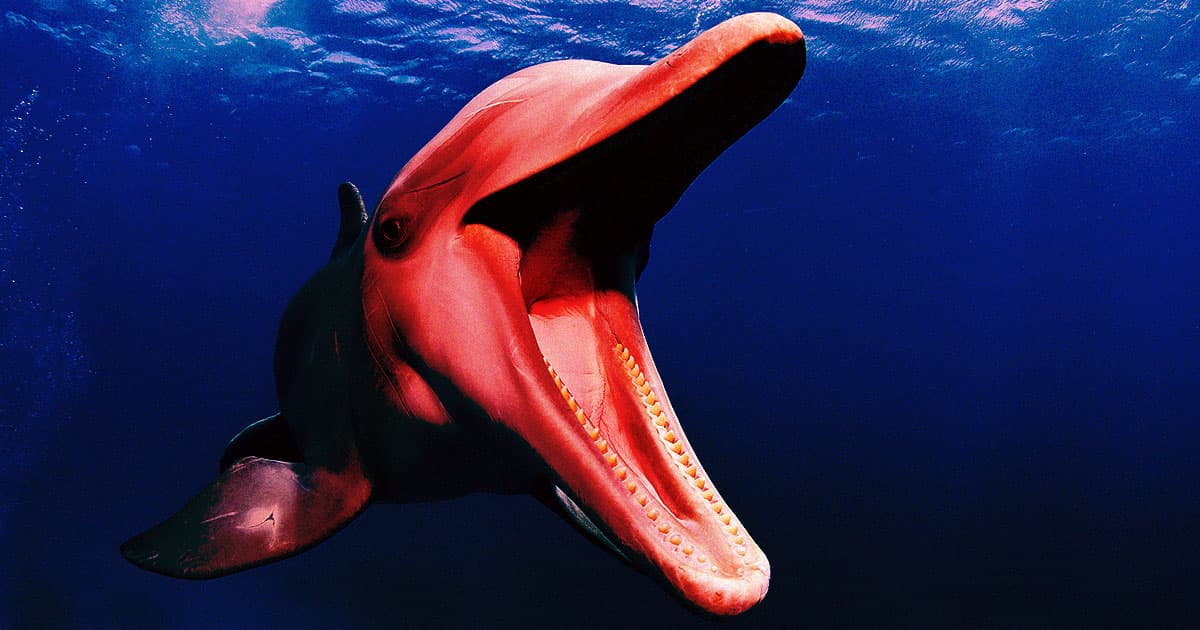 Dolphins Are Screaming Because of Underwater Drilling Noise, Scientists Say

This is absolutely heartbreaking.

This is absolutely heartbreaking.

Have you ever struggled to be heard over the sound of street construction? That makes you not all too different from dolphins, heartbreaking new research suggests.

Published recently in the journal Current Biology, a new paper out of the Dolphin Research Center in the Florida Keys studied a pair of dolphins named Delta and Reese, who the marine biologists outfitted with recording tags to determine how their communication changed in response to different loud sounds that they piped into their pool via speakers.

In the wild and in captivity, dolphins communicate with each other through a variety of sonic tricks including echolocation and those adorable clicks and whistles humans love so much. When introduced to noises akin to the kind of loud drilling done by the military, oil, and shipping industries in the experiment, the pair would lengthen their calls and make them louder to try to be heard over the noise. In short: they were shouting, or screaming, to be heard by one another — and often, they weren't successful.

Unsurprisingly, louder noises corresponded to Reese and Delta having even more difficulty communicating. At the loudest sounds, they were only successfully able to communicate 62.5 percent of the time, the study found.

"It was surprising to see how much the success rate dropped," Pernille Sørensen, a biologist and PhD candidate out of the University of Bristol in England who cowrote the Current Biology paper, told the New York Times of the experiment.

While scientists have observed dolphins in the wild seeming to change their behavior in response to humans, such as an Australian study that in 2006 linked lower rates of dolphin sightings to higher numbers of dolphin-watching tourism boats, until this study, no one had documented their response to what the researchers call "anthropogenic noise."

As Oregon State University behavioral ecologist Mauricio Cantor told the NYT, "it’s usually really hard to do these kinds of studies in the wild," hence the captivity study.

What's perhaps even more tearjerking about this study is that Delta and Reese were apparently thrilled to participate.

"They’ve always been the most motivated animals," Sørenson told the NYT. "They were really excited about doing the task."

Mah Bucket
Walrus Falls Asleep on Iceberg, Drifts Across Ocean
3. 15. 21
Read More
Norway Gets the Go Ahead to Drill Into the Arctic
1. 4. 18
Read More
US to Reverse Offshore Drilling Regulations, Leaving the Environment Vulnerable
12. 29. 17
Read More
+Social+Newsletter
TopicsAbout UsContact Us
Copyright ©, Camden Media Inc All Rights Reserved. See our User Agreement, Privacy Policy and Data Use Policy. The material on this site may not be reproduced, distributed, transmitted, cached or otherwise used, except with prior written permission of Futurism. Articles may contain affiliate links which enable us to share in the revenue of any purchases made.
Fonts by Typekit and Monotype.