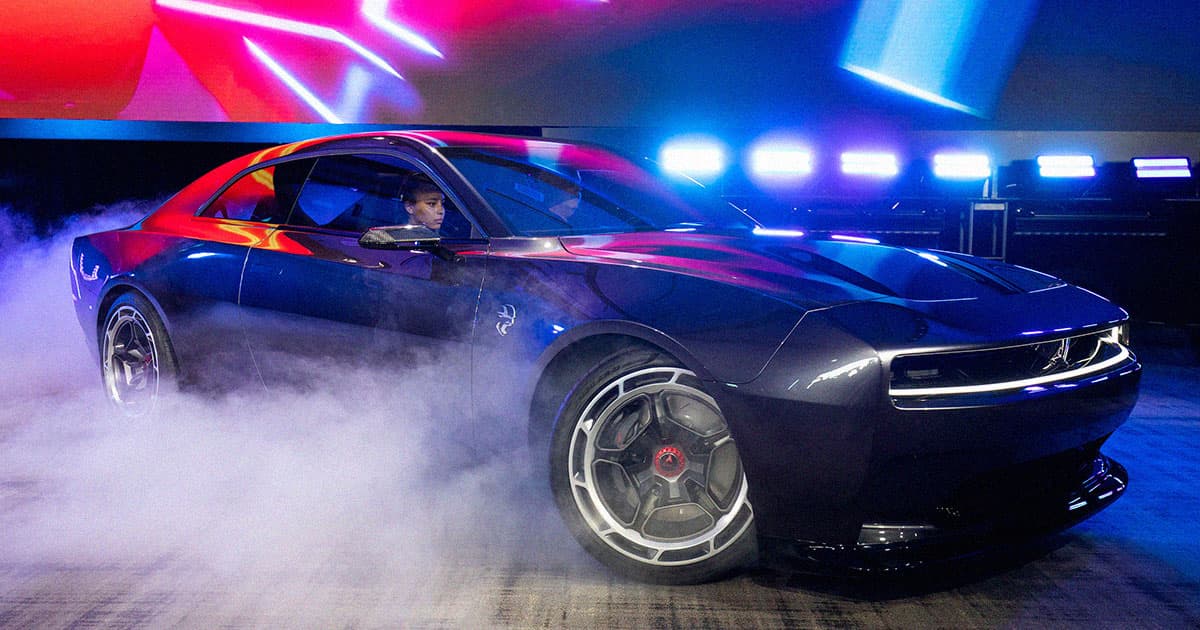 This is the most American thing we've ever heard.

This is the most American thing we've ever heard.

American auto giant Dodge is going electric — and it certainly won't be the first or last to do so.

But to satisfy its muscle car-loving customer base, Dodge is employing an amazingly American solution: since electric motors are very quiet and don't generate the kind of obnoxious noise associated with the brand's gas-guzzling, V8-powered monstrosities, it's exploring technology to make its EVs artificially loud and obnoxious.

That means its upcoming Charger Daytona, set to debut in 2024, will not only generate enough noise to warn pedestrians of its presence — something EVs are federally mandated to do — but the car will also mimic the sound of exhaust by forcing air through pipes with baffles and chambers inside. The result: a roaring 126 decibels of completely pointless noise, which is more than enough to cause ear pain and hearing loss, as CNN points out.

In other words, it's taking a big advantage of the electric car and flipping it on its head to make sure everybody nearby — perhaps even the driver — will suffer noise pollution and possibly even hearing issues, for no reason.

The Charger Daytona will not only feature exhaust pipes that make a ton of unnecessary noise, but it'll also have a transmission that shifts gears. Not for efficiency — EVs certainly don't need it to be faster or more efficient — but to appease those who are nostalgic for the good ol' days.

The company is promising that its EV will meet its legendary Challenger Hellcat muscle car "in all key performance measures," according to CNN. That means it won't just be obnoxiously loud, but also dangerously fast.

Dodge has yet to announce pricing, but chances are you'll hear the Charger Daytona before you see it.

READ MORE: Most electric cars are quiet. But Dodge says its future electric muscle car will be super loud [CNN]

More on EVs: New App Rents a Whole Electric Car for $500 Per Month

Real American eMuscle
Dodge Says It's Only Making an Electric Car Because the Performance Is So Good
7. 8. 21
Read More
Volkswagen Has Pledged to Spend $40 Billion on Electric and Hybrid Cars
11. 17. 17
Read More
This Patent Could Solve One of the Biggest Issues With Owning a Tesla
6. 6. 17
Read More
+Social+Newsletter
TopicsAbout UsContact Us
Copyright ©, Camden Media Inc All Rights Reserved. See our User Agreement, Privacy Policy and Data Use Policy. The material on this site may not be reproduced, distributed, transmitted, cached or otherwise used, except with prior written permission of Futurism. Articles may contain affiliate links which enable us to share in the revenue of any purchases made.
Fonts by Typekit and Monotype.